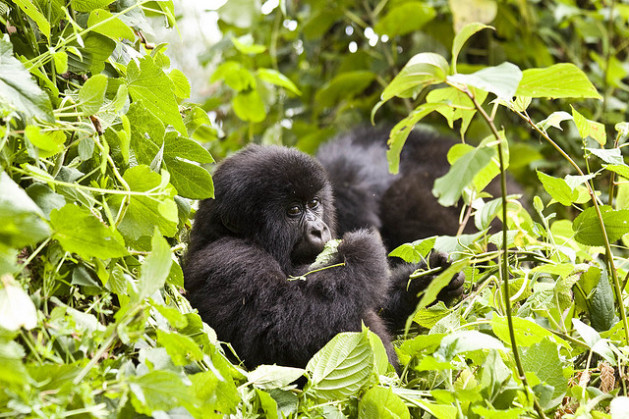 Kenyan president Uhuru Kenyatta says that the aim of the single tourist visa is to market the gorillas of Rwanda, Uganda and Burundi and the wildlife of Kenya and Tanzania as a package. Credit: Hjalmar Gislason/CC By 2.0

GOMA, DR Congo, Nov 4 2013 (IPS) - As the majority of East African Community countries signed an agreement paving the way for a single tourist visa in the region from 2014, some believe that Tanzania’s hesitance to agree to this integration is largely due to the conflict in the Democratic Republic of Congo.

The EAC comprises Burundi, Kenya, Uganda, Rwanda and Tanzania. But on Aug. 2 only Kenya, Uganda and Rwanda signed an agreement, which introduces a single visa that can be obtained at any entry point effective from January 2014.

“The visa will cost 100 dollars [for non-citizens of the three signatory countries] for up to 90 days. The country of entry will collect the fee,” Peter Okota, an immigration officer in the Ugandan capital, Kampala, told IPS. Each country will receive 30 dollars from this fee, while the remaining 10 dollars will go towards technical operations.

Currently, a tourist who visits the five EAC countries has to spend 250 to 300 dollars on visa fees, with only Kenya allowing re-entry on the initial visa after a visit to another EAC country.

But Rwanda and Uganda have been accused of supporting the M23 rebels and according to Godefroid Ka-Mana, president of the Great Lakes Pole Institute based in Goma in eastern DRC, “Tanzania’s participation in the new [United Nations Organisation Stabilisation Mission in the DRC] brigade against the M23 rebels is for a reason.”

Tanzanian blue helmets, who helped the Congolese army force out M23 rebels from their strategic position 15 km north of Goma in August, lost two soldiers in the fighting.

A third Tanzanian peacekeeper was killed on Oct. 26 in fighting between the Congolese army, the U.N. special brigade and M23. The fighting started on Oct. 25 in the Kibumba, Kiwanja, Rutshuru and Rumangabo districts of eastern DRC, all four of which were reclaimed from M23.

Thomas d’Aquin Mwiti, president of North Kivu’s civil society organisation, told IPS that the loss of Tanzanian soldiers to save Goma would inevitably affect relations between Tanzania and those accused of supporting the war in the DRC.

Diogène Musoni, an economics lecturer at the Rwanda Tourism University College, told IPS that Tanzania was more engaged in the Southern African Development Community (SADC) than in the EAC and remains hesitant about the path of economic integration represented by the introduction of a single visa for other reasons.

He pointed out that the single visa could increase the EAC’s tourist revenue by 50 percent over the first five years of the agreement.

When contacted by telephone, the spokesperson’s office at the Tanzanian Ministry of Tourism refused to comment on “Rwandese intellectuals views about Tanzania’s isolation,” but asserted that the EAC is as important to Tanzania as SADC.

In September, Tanzanian Minister for the EAC Samuel Sitta responded to questions from the Tanzanian national media by stating that the country would not be forced into an accelerated pace of integration that is not sustainable.

Sitta suspected that the three countries involved in the single visa wanted to isolate Tanzania. “The areas of cooperation the three countries are working on are no different from the ones we collectively discussed during the chairmanship of Mwai Kibaki [former Kenyan president],” he stated. “If they have all of a sudden chosen to isolate us, all we can do is leave them alone and wish them well.”

In a statement published in September, the Burundian government said that the move by the three signatory countries to go ahead with signing the agreement raised doubts amongst the other member states.

The government of Burundi added that while it recognised that the EAC Treaty allows for countries to fast track community projects if necessary, it also states that decisions should be taken with the consensus of all member states, which was not the case with the visa agreement.

However, at the time of the agreement on Aug. 2, the Rwandan Minister for the EAC Jacqueline Muhongayire said: “We want to make it clear that the two other countries [Burundi and Tanzania] have not been left out. They can opt into this agreement once it is a priority for them.”

Okota said that although the introduction of the single visa has been delayed since 2006 because of issues of security and inadequate infrastructure in some EAC countries, the current main causes of disagreement are the fee charges and revenue sharing arrangements.

“There are still small problems with the pricing and revenue allocation from the single visa system,” Denise Nijimbere, acting director of the Burundi Tourism National Office, admitted to IPS.

However, Kenyan President Uhuru Kenyatta believes that the single visa is the only way that the EAC can attract a larger number of tourists.

“The aim is to market the gorillas of Rwanda, Uganda and Burundi and the wildlife of Kenya and Tanzania as a package,” Kenyatta told a regional tourism forum in Kenya last month, adding that he hoped the visa would be implemented by all countries before the end of 2014.