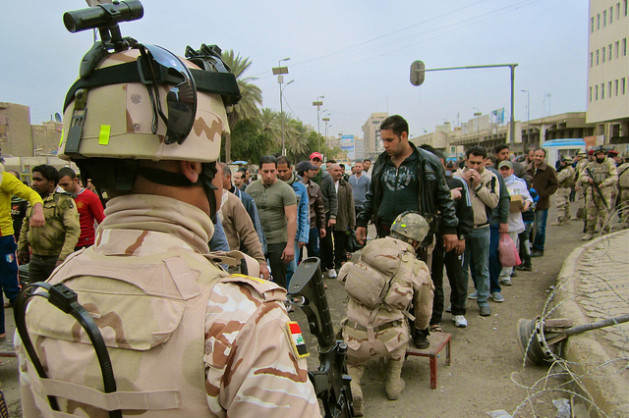 The occasion was the visit of Prime Minister Nouri al-Maliki whose main purpose was to secure greater U.S. military and security assistance just two years after the last U.S. troops and advisers left Iraq due to his government’s refusal to grant them immunity from Iraqi law.

Official Washington appears genuinely concerned about the resurrection of Al-Qaeda in Mesopotamia.

With sectarian violence now claiming over 1,000 lives a month – and approaching the levels that prevailed in 2007-08 when the country tottered on the edge of all-out civil war – Maliki called in particular for the delivery of powerful weapons systems, notably helicopter gunships, to fight an increasingly lethal Al-Qaeda-linked insurgency that has been re-energised in important part by the raging civil war in Syria next door.

Members of his delegation hinted that Baghdad might also welcome the return of some U.S. military personnel as advisers, as well as drones to patrol Iraqi skies, although they were careful not to press the issue publicly, apparently for fear of a political backlash back home six months before the next scheduled elections in which Maliki is expected to run for a third term.

“We were partners and we shed blood together while fighting terrorists,” he told his audience Thursday at the U.S. Institute of Peace (USIP) in reference to nine-year-old U.S.-led effort to curb mainly Sunni resistance to Washington’s occupation and Shia-led governments.

“We will defeat the terrorists by our local efforts and our partnership with the United States,” he added, calling for “a global war against terror.”

While the administration of President Barack Obama, with whom Maliki held a low-key White House meeting Friday, dropped such rhetoric long ago, senior officials said they were receptive to his requests.

“The Iraqis have asked for weapons systems from us. …[W]e support those requests, and we’re working with the Congress through those as appropriate,” said a senior official after a key meeting between Maliki and Vice President Joe Biden, who has effectively headed the administration’s Iraq portfolio since 2009 when Washington began its withdrawal from the country.

But the officials stressed that the Iraqi president’s own sectarian leanings and authoritarian leadership style also bore major responsibility for the growing threat posed by radical Sunni Islamists, including the Islamic State of Iraq and the Levant (ISIS), which has steadily consolidated its position in eastern Syria along the Iraqi border.

Indeed, the major message conveyed to the Iraqi leader here by the both the administration and Congress, key members of which Maliki also met this week, is that military power and counter-terrorist measures, even with enhanced U.S. cooperation, will not by themselves be sufficient to defeat the challenges facing Baghdad.

“…[I]f Prime Minister Maliki continues to marginalize the Kurds, alienate many Shia, and treat large numbers of Sunnis as terrorists, no amount of security assistance will be able to bring stability and security to Iraq,” argued a letter to Obama signed by a bipartisan group of six of the Senate’s most influential members as Maliki arrived here.

It accused Maliki of “too often pursuing a sectarian and authoritarian agenda. …It is essential that you urge Prime Minister Maliki to adopt a strategy to address Iraq’s serious problems of governance,” they wrote.

And while lawmakers, even after meeting with Maliki Thursday, continued to suggest that they would condition increased military assistance and sales on Maliki’s pursuit of a more conciliatory policy toward Sunnis and Kurds, official Washington appears genuinely concerned about the resurrection of Al-Qaeda in Mesopotamia, and the downward spiral of violence in Iraq and its broader implications.

“Both sides emphasized – on an urgent basis – the need for additional equipment for Iraqi forces to conduct ongoing operations in remote areas where terrorist camps are located,” it said in an apparent referring to the Apache helicopters and other aircraft which Baghdad hopes to deploy in the predominantly Sunni Al-Anbar province which runs along much of Iraq’s border with Syria.

The same section praised Maliki’s public strategy to reach out to disaffected Sunnis to isolate ISIS and related groups, notably by renewing efforts to enlist and empower local tribal militias, such as the so-called “Sons of Iraq,” that fought with U.S. forces during their much-celebrated “surge” of troops in 2007-08.

Whether Maliki, who halted payments to those militias as U.S. troops withdrew from Iraq, will now follow through remains a point of major uncertainty that was not dispelled in his meeting with senior senators on the Foreign Relations Committee Thursday.

The committee chair, Robert Menendez, said he was “extremely disappointed” by Maliki’s presentation about Iraq’s internal challenges and it made him “even more concerned” about providing Baghdad with attack helicopters for fear they could be used indiscriminately against suspected Sunni targets and thus drive more of the Sunni population into ISIS’ arms.

For their part, administration officials suggested that enhanced intelligence cooperation between the U.S. and Iraq could ease such concerns and stressed that ISIS had introduced heavy machine guns that had already brought down a number of Baghdad’s existing helicopter fleet.

They also insisted that Maliki had taken some important steps toward reconciliation recently, such as meeting the newly elected governor of Anbar and easing tensions between the central government and Kurdistan.

“I emphasised …that we were encouraged by the work that Prime Minister Maliki has done in the past to ensure that all people inside of Iraq – Sunni, Shia and Kurd – fell that they have a voice in their government,” Obama said in a brief joint appearance after their meeting. He added that next year’s election will be an “important expression” of that aspiration.

In any event, what with the sectarian civil war next door in Syria, the importance of reversing the current trajectory of sectarian violence and reducing ISIS’ presence in Iraq is widely recognised.

“If left unchecked, we could find ourselves in a regional sectarian struggle that could last a decade,” Gen. Lloyd Austin, the head of the U.S. Central Command (Centcom), told the Wall Street Journal during Maliki’s visit.

Of particular concern is the possible re-activation – possibly with Maliki’s blessing — of Shia militias to counter ISIS and similar groups. Such a development, according to Austin, would not only move the country closer to civil war, but also strengthen Iran’s already-significant influence in Iraq.

Indeed, Tehran’s influence in Iraq is already a source of major discontent with Maliki here, particularly in Congress where the Israel lobby, which tends to see Iran as its strategic enemy in the region, exerts its greatest influence.

In their letter, the six senators urged Obama “to make clear to …Maliki that the extent of Iran’s malign influence in the Iraqi government is a serious problem in our bilateral relationship, especially for the Congress.” ‘

They pointed in particular to reports that Tehran uses Iraqi airspace to transport military supplies to Syria and Iraqi forces as proxies to carry out attacks against camps of the Mujahedin-e Khalq (MEK), an Iraq-based Iranian rebel group that is supposed to be under Baghdad’s protection.