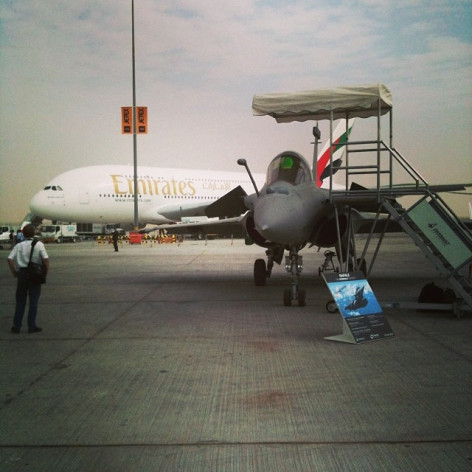 The 100-billion-dollar deal for commercial jetliners was announced at the Dubai, UAE airshow, pictured above on Nov. 17, 2013. Credit: Attila Malarik/cc by 2.0

UNITED NATIONS, Nov 21 2013 (IPS) - The multi-billion-dollar Middle East arms market – bolstered by hefty purchases by oil-blessed Arab nations such as Saudi Arabia, the United Arab Emirates (UAE), Kuwait and Qatar – has always been one of the biggest bonanzas to the U.S. defence industry.

But a staggering 100-billion-dollar deal last week for the sale of Boeing’s new 777X commercial jets to three airlines in the UAE and Qatar threatens to outpace U.S. military sales.

"The size of the market for purely civilian aircraft isn't a significant concern for those of us who worry about the sophisticated military equipment that's being sold around the world." -- Natalie Goldring

William Hartung, director of the Arms and Security Project at the Centre for International Policy, told IPS U.S. arms sales to the Middle East and Persian Gulf have reached record levels in recent years.

“They have elevated the United States to a position of dominance in the world market, controlling 78 percent, as of 2011,” he said.

And most notable, he pointed out, is a 60-billion-dollar package to Saudi Arabia the U.S. Congress was notified of in 2010.

“It was the biggest arms deal ever concluded by the United States with any country,” said Hartung.

Last week’s multi-billion-dollar deals for commercial airliners may supplant arms sales as the largest source of income from U.S. aerospace deals to the region over the next few years, he predicted. Still, the administration of President Barack Obama has been aggressively pushing U.S. arms sales, so if they decline it won’t be for lack of trying on the part of the administration and U.S. industry, said Hartung.

The 100-billion-dollar deal – for commercial jetliners announced at the Dubai, UAE airshow – was signed by Emirates and Etihad airlines (of UAE) and Qatar Airways, with deliveries slated for 2020.

The total contracts for commercial jet sales to countries in the Middle East were estimated at more than 150 billion dollars, according to one published report.

Boeing, which is based in the United States, said it had orders for 342 planes just on the first day of the airshow.

Dr. Natalie J. Goldring, a senior fellow with the Security Studies Programme in the Edmund A. Walsh School of Foreign Service at Georgetown University, told IPS the Dubai Airshow represents a potential windfall for the Boeing aircraft company.

However, she said, it is important to separate the public relations efforts at air shows from the actual deliveries.

“Companies negotiate for months to reach agreements that they can announce with great fanfare at the beginning of the major international air shows like Dubai,” Goldring said.

But not all orders become contracts, and not all contracts result in deliveries. That means any announcements at air shows are likely to be overstated, she noted.

However, Goldring pointed out, contracts to sell commercial aircraft overseas are an economic boost to manufacturers, stockholders, and the communities in which the aircraft are built.

Such sales avoid the short- and long-term risks of military sales, she added.

Goldring said some have suggested the commercial aircraft market may overshadow the military market.

“The size of the market for purely civilian aircraft isn’t a significant concern for those of us who worry about the sophisticated military equipment that’s being sold around the world,” said Goldring, who also represents the Acronym Institute at the United Nations on conventional weapons and arms trade issues.

In contrast, the other two major arms buyers in the Middle East, namely Egypt and Israel, are not cash customers but receive virtually all of their weapons at no cost, as part of U.S. military aid.

The only missing items in the Saudi package were combat ships and a large-scale missile defence, which are now in the works.

The rearming of Iraq — drawing from Iraqi oil revenues, not U.S. aid — has also been a large boost to U.S. producers, said Hartung. He said that large U.S. producers are looking to foreign sales to fill in gaps that are occurring as a result of the downward trend in Pentagon weapon spending over the past few years.

“That being said, it’s hard to see how arms sales to the region can continue at this pace — they are certainly saturating the Saudi market, which is far and away the largest in the region,” Hartung said.

However, the funds from a given deal are generally spent out over a five- to 10-year period, so there will be a steady income to U.S. firms from the deals announced in 2010 to the present for some time.

“Even so, while it’s not a certainty, there’s a chance that the recent huge arms deals to the region may be a bit of a bubble,” Hartung warned.

Goldring told IPS the proposed arms sales to Middle East nations haven’t been adequately scrutinised. Even the Israelis, who often worry about sales to potential military adversaries, have apparently chosen to argue for increased military assistance to Israel instead of opposing these sales, she added.

The signing of the Arms Trade Treaty this fall by U.S. Secretary of State John Kerry was welcome news. Now its time for the United States to live up to those commitments, she noted.

“All proposed military sales should be evaluated to ensure that they’re consistent with the letter and the spirit of the Arms Trade Treaty,” Goldring said.

For example, she said, any weapons sales that are likely to be used for internal repression should be blocked, consistent with the Treaty’s provisions.

Overseas military sales carry many risks. The weapons are often usable for decades, she added.

“That means that when the U.S. government sells weapons to overseas customers, it’s assuming their governments will be stable for that period of time,” she said.

Government instability among weapons recipients increases the risk that U.S. weapons will fall into adversaries hands, and potentially even be used against U.S. forces, Goldring warned. Commercial aircraft sales simply don’t involve the same risks as military sales, she said.