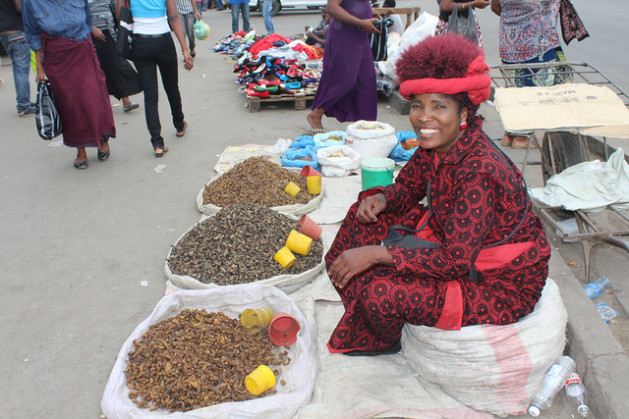 LUSAKA, Dec 17 2013 (IPS) - It is known as the land of copper to the outside world, but there’s another c-word that does a roaring trade in Zambia, albeit locally – caterpillars.

On a street corner in the capital Lusaka on a scorching hot day, Dorothy Chisa, 49, is selling the insects, a popular high-protein delicacy in the southern African country. They come raw in different sized pots starting at five Zambian Kwacha (less than one dollar).

"They come from other countries like Malawi, Zimbabwe, even South Africa to buy [the caterpillars]." -- Chris Siame

“[People] like them very much. They taste very nice, like fish meat. They have vitamins. You pound them and you make a porridge for babies,” the married mother of seven, who can earn 600 Kwacha a day selling caterpillars, tells IPS.

Found on the Mopane tree in Zambia’s north, the insects are called ‘Ifishimu’ in Bemba or ‘Ifinkubala’ in the Chewa language heard in the country’s east. The thorns on the black type are more visible than the brown, which vary in size.

After locals pick the living insects from the trees with their bare hands, the creatures are squeezed to discharge the leaves they’ve consumed and put on low heat to roast. In the sweltering Zambian weather, they normally dry within two days.

Locals mix them with nshima, a cornmeal dish and a staple in Zambia, as a snack with tomato and onion on top, and add them to stews. One Lusaka restaurant serves the insects, and at least one safari lodge at Victoria Falls, on the border with Zimbabwe, has them available to tempt mzungus (‘whites’).

Locals flock to the north from Lusaka and other parts of Zambia to buy them in bulk, selling the caterpillars across the country, all year round. This year, attendance in Northern Province schools dropped by more than 70 percent at one stage as students abandoned their lessons to catch the insects, a Zambian newspaper reported last month.

Demand by businessmen and women from urban areas is reported to have pushed up their price, with Kitwe and Lusaka residents camping in villages to snap them up. It was also claimed parents were forcing children to sell caterpillars.

According to a study published in May by the U.N. Food and Agriculture Organisation (FAO), entomophagy – the consumption of insects by humans – supplement the diets of approximately two billion people.

More than 1,900 species, found mostly in tropical countries, are edible. Given their high nutritional value, low emissions of greenhouse gases, low requirements for land and the high efficiency at which they convert feed into food, insects can contribute to food security and help with protein shortages, the report said.

In West Africa, the sheanut caterpillar is consumed, while the sapelli is lapped up in Central Africa (the species are the same as the Mopane but they feed off different trees).

“After buying from us they distribute in other provinces,” Chris Siame, surrounded by tall bags of caterpillars he bought in October and is now selling at bustling Soweto Market in Lusaka, tells IPS. “Some, they come from other countries like Malawi, Zimbabwe, even South Africa to buy them.”

In South Africa, the caterpillars are on the menu of one Johannesburg restaurant.

Siame, 32, makes the journey of about 900 km to the north annually for three weeks to buy the insects.

“We use the barter system. You give them [traders] clothes,” he explains. “If they don’t want it, you just give them cash.”

He purchased two-kg bags of caterpillars for 40 Kwacha (less than a dollar) each. After trucking them back to Lusaka he’s now selling them for 60 Kwacha a bag.

Their nutritional value is a bonus. According to the FAO, every 100 grammes of dried caterpillars contain about 53 grammes of protein, about 15 percent fat and about 17 percent carbohydrates. The insects are believed to have a higher proportion of protein and fat than beef and fish.

They’re also rich in potassium, calcium, magnesium, zinc, phosphorus and iron, among other vitamins and minerals.

“When we go for antenatals, we’re advised to eat them,” another seller, breastfeeding a baby at Soweto Market, tells IPS.

Dr. Francis Mupeta, the secretary general of Resident Doctors in Zambia, says he sees locals eating caterpillars in his professional and personal life.

“My wife is pregnant and trust me she has cravings for finkubala! That’s the reason we had to buy three months’ stock,” he tells IPS.

“I strongly advise pregnant women to eat finkubala. They improve their appetite, reduce nausea and contribute to their overall nutritional status,” Mupeta adds, noting that they are relatively cheap and readily available in rural areas.

Paul Vantomme, senior forestry officer at FAO, says there are three steps policy makers in Zambia’s food and health sectors can take to ensure future generations have access to the food.

“First, acknowledge that insects are part of the diet and help enrich these diets with valuable proteins,” he tells IPS.

“Secondly, provide institutional and legal support to ensure that caterpillars brought to the market are safe to eat for the consumers [and make sure] food inspections cover the quality of insects, just as this is done for meat, fish, milk etc.

According to FAO, commercalisation of the Mopane caterpillar has led to intense pressure to overharvest, resulting in unsustainable use. Since the 1990s, Mopane populations have waned, with poverty, food insecurity and environmental disasters making things worse.

Vantomme said levels of harvesting should be monitored. New Mopane trees could be planted to increase numbers.