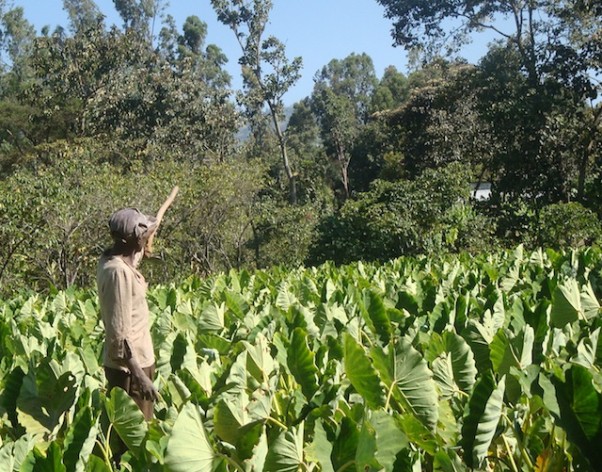 “It was common to experience chronic food shortages due to drought or crop disease. My children were even too weak to go to school,” Datta told IPS.

Datta and a number of other farmers in this Horn of Africa nation are experiencing improving food and livelihood security since the introduction of hybrid seed here.

Ethiopia currently prohibits the use of GM crops.

“The old seeds gave us a small crop. But the new seeds consistently provide us with a much better harvest every year … Since our increased yield they have more energy to attend and get an education,” said Datta who produces tuber crops.

ATA believes “not all seeds are created equal” and has been investing in improved, higher-quality, higher-yielding seeds as a strategy to raise productivity on many Ethiopian smallholder farms.

The project replaced seeds that farmers normally used with improved seed varieties. According to FAO, 144,000 targeted rural households benefited from the improved high yielding and drought- and disease-resistant seeds. This year, the intervention was established as a leading programme.

He added that the organisation was also providing training to local farmers.

Knowledge sharing between farmers plays a major role in community food security. Wondimagegne says that the initiative’s targeted farmers have shared their new seeds, which has increased knowledge transfer exponentially and created “a multiplication effect”.

“There is a good cultural practice of farmers sharing with friends and relatives. We have observed that farmers share the knowledge and the planting material without any imposition.”

Self Help Africa has established 15 improved seed-producing cooperatives in Ethiopia this year with a current membership of 625 smallholder farmers in Ethiopia’s third-largest state, the Southern Nations, Nationalities and Peoples’ Region (SNNPR).

The cooperatives are now responsible for meeting 15 percent of the region’s wheat seed  demand – Ethiopia is currently a net importer of the cereal grain.

“Typically, farmers repeatedly use saved seeds from one season to the next, which tends to reduce the genetic quality of the seed resulting in diminishing yields over time. By giving farmers control of quality assured seed production they have greater confidence of a sustainable supply chain that will lead to improved yields and improved food security,” Moffett said.

The NGO One Acre Fund distributes improved seeds to over 130,000 smallholder farmers in Kenya, Rwanda, Burundi, and Tanzania. Stephanie Hanson, director of policy at the fund, told IPS that their farmers have doubled their income per planted half hectare.

“Distributing improved seed varieties to smallholder farmers, when paired with training on how to use them, is one of the most cost-effective ways to increase a farmer’s productivity,” she said.