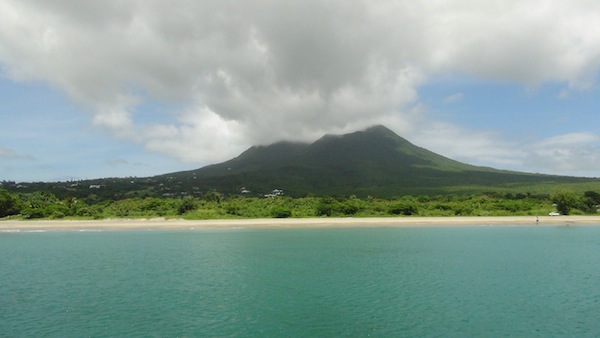 Mount Nevis sits at the centre of the volcanic island of Nevis, which has reserves of geothermal energy. Credit: Desmond Brown/IPS

CHARLESTOWN, Nevis, Dec 19 2013 (IPS) - The tiny island of Nevis in the northern region of the Lesser Antilles is one of the few remaining unspoiled places in the Caribbean. It is now seeking to become the greenest, joining a growing list of Caribbean countries pursuing clean geothermal power.

Last month, legislators on the volcanic island selected Nevis Renewable Energy International (NREI) to develop a geothermal energy project, which they said would eventually eliminate the need for existing diesel-fired electrical generation by replacing it with renewable energy.

In January 2014, NREI will begin to construct a geothermal power plant and injection and production wells on Crown Land leased from the Nevis Island Administration.

Acting Premier Mark Brantley said the island, with a population of 9,000, plans to remain “how the Caribbean used to be” while striving to earn the title of “greenest place on earth”.

“Nevis is committed to beginning this journey on the path to greener living,” Brantley told IPS. “The use of renewable energy will result in a reduction of emissions of pollutants and greenhouse gases, thus advancing Nevis’ commitments under the United Nations Framework Convention on Climate Change.”

The UNFCCC is an international environmental treaty negotiated in June 1992 at the United Nations Conference on Environment and Development (UNCED), informally known as the Earth Summit, held in Rio de Janeiro. The treaty’s objective is to “stabilise greenhouse gas concentrations in the atmosphere at a level that would prevent dangerous anthropogenic interference with the climate system.”

The parties to the convention have met annually from 1995 in Conferences of the Parties (COP) to assess progress in dealing with climate change. In 1997, the Kyoto Protocol was concluded, establishing legally binding obligations for developed countries to reduce their greenhouse gas emissions.

The 2010 Cancún agreements state that future global warming should be limited to a two-degree Celsius increase from pre-industrial levels. The twentieth COP will take place in Peru in 2014.

“In addition to providing lower cost, cleaner electricity for Nevis, this can potentially be expanded to include St. Kitts and other islands in the future,” Premier Brantley said. St. Kitts, which lies two miles northwest if Nevis, uses a maximum of 46 mw of energy each year.

Nevis is the smaller island of the pair, known as the Federation of St. Kitts and Nevis. It is home to active hot springs and a large geothermal reservoir. Seven volcanic centres have been identified on Nevis and drilling at three sites has indicated that the geothermal reservoir is capable of producing up to 500 mw of constant baseload power year round.

Dominica recently launched its own geothermal project with the construction of a small power plant for domestic consumption and a bigger plant of up to 100 mw of electricity for export to the neighbouring French islands of Guadeloupe and Martinique.

The nearby island of St. Vincent subsequently announced the launch of a 50-million-dollar project, funded by the Bill, Hillary & Chelsea Clinton Foundation, the St. Vincent and the Grenadines government, Barbados Light and Power Holdings and Reykjavik Geothermal.

Prime Minister Dr. Ralph Gonsalves said a contingent of Icelandic scientists had arrived on the island and would remain until the end of the year investigating the mountainous nation’s geothermal potential, estimated at 890 mw.

Barbados is also making a major shift away from fossil fuels, aiming for 29 percent of its power generation from renewable sources by 2029. An electric light and power bill was passed with bipartisan support in parliament on Dec. 17.

Opposition leader Mia Mottley said the most significant thing the government can do for residents is to reduce the cost of electricity to 29-30 cents a kilowatt-hour as soon as possible.

“If we understand how the costs are incurred, we then understand it can only be unacceptable for the government to preside over the Barbados National Oil Company profiteering to the tune of 53 million dollars last year, and ordinary people in this country in households and business are struggling to pay electricity bills.”

Prime Minister Freundel Stuart said that as part of the drive to make Barbados more sustainable, the government had entered a partnership with the Inter-American Development Bank (IDB), which would help develop a framework to diversify the country’s energy mix and reduce its heavy dependence on fossil fuels.