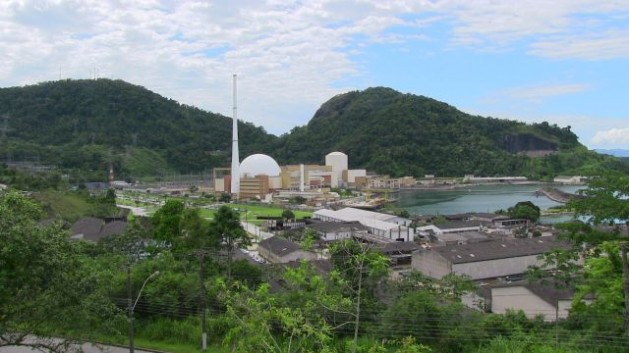 View of the Angra 2 nuclear reactor, located in a “mousetrap” between the mountains and the sea. Credit: Fabíola Ortiz/IPS

ANGRA DOS REIS, Brazil , Dec 18 2013 (IPS) - Brazil has continued to develop nuclear energy despite the costs involved and the fact that the industry will never account for more than a small portion of the country’s energy production.

“The electric system needs thermal energy and this is the cleanest and safest kind,” Othon Luiz Pinheiro da Silva, the president of Eletrobras Eletronuclear, told IPS.

“It would be a mistake to rule it out,” added the head of the public enterprise in charge of building and running the nuclear power plants.

Three percent of Brazil’s electricity comes from thermonuclear energy. But Pinheiro da Silva himself says the nuclear power industry’s share should not grow much beyond four percent, because hydropower and other renewable sources will meet rising demand.

Angra dos Reis, in the Costa Verde region on the Atlantic coast 160 km west of Rio de Janeiro, was chosen as the site of the 640-MW Angra 1, Brazil’s first nuclear reactor, which began to operate in 1985 with U.S. technology.

The 1,350-MW Angra 2, the result of a technology transfer agreement with Germany, came onstream in 2001.

Nuclear energy is “complementary,” the superintendent of Angra 2, Antônio Carlos Mazzaro, an engineer who has worked at the plant for 35 years, told IPS.

Angra 2 “generates 10.5 million MWh [megawatt-hours] per year, enough to meet one-third of the state of Rio de Janeiro’s demand, or to supply a population of five million people,” Mazzaro said.

Angra 3, which is being built at a cost of six billion dollars, is to begin operating in 2018. It employs 3,000 workers.

The constitution establishes a state monopoly over nuclear energy and the uranium cycle.

This country of nearly 200 million people launched its nuclear energy research programme in the 1950s. It has the world’s sixth-largest uranium reserves, 310,000 tons, although there are estimates that it could have up to 800,000 tons.

Brazil hopes to become an exporter of nuclear fuel, and had plans to build between four and eight new nuclear power plants by 2030. Studies have found 40 suitable possible sites for new reactors.

But the government had to back down after the March 2011 disaster at the Fukushima nuclear power plant in Japan.

“The plan didn’t change; what changed was the speed with which it was going ahead,” Pinheiro da Silva said. “Governments had to respond to public opinion, and the immediate response in Brazil was to bring the projects to a halt in order to study them and take precautions.

“Although we are in a region much more suitable [than earthquake-prone] Fukushima and we are using more modern technology, we came up with a response plan, analysing all of our safety systems,” with an investment of 128 million dollars, he added.

But award-winning ecologist Vilmar Berna argues that the Costa Verde region was a bad choice.

Along that coastal area, mountains covered with forest abut the sea, leaving only enough room for a narrow stretch of beaches. The soil is fragile and landslides are frequent.

“The three power plants are in a veritable mousetrap, because on holidays, traffic jams already form on the only road out of there. Just think if the local population had to be evacuated,” Berna remarked to IPS.

The attempt to develop the region, which depends above all on tourism, was also misguided, he said.

When Angra 1 was built, more than 5,000 workers came to the area. Once the construction work was completed, they and their families ended up expanding the population of the local favelas or slums, Berna pointed out.

The decision to develop a nuclear industry was taken by the 1964-1985 military dictatorship.

“Protesting against nuclear energy was like protesting against the government, which meant prison, torture or death,” Berna said. “But today, in democracy, this issue should be decided in a plebiscite.”

In January, the National Nuclear Energy Commission sought public input on a draft law to establish the rules and requirements for approving the locations of the new reactors.

But both Berna and political analyst Clóvis Brigagão say the industry continues to be cloaked in secrecy.

The Brazilian people have never been given the right to choose whether or not they want nuclear energy, Berna said.

Another problem is that the salt water used to cool down the reactors is four degrees hotter when it is dumped back into the ocean, Berna said.

In 2011, the National Environment Council ruled that the water should not be more than three degrees warmer than the temperature of the ocean, and should never be over 40 degrees Celsius.

Eletronuclear responded to IPS that since the 1980s it has measured the temperature every 15 days at two different spots where the effluent flows into the Atlantic.

In the last few years, “the temperature of the sea water dumped into the ocean at the Saco Piraquara de Fora inlet has never been higher than the 40 degrees stipulated by the resolution,” says a statement sent to IPS.

Another question of concern to environmentalists is the disposal of radioactive waste.

According to the company, the low-level radioactive waste is stored in installations at the Itaorna Complex, where the Angra plants are located. And the highly radioactive waste, such as spent nuclear fuel, is inside the reactors.

On Dec. 2, the courts ordered the government, the National Nuclear Energy Commission and Eletronuclear to factor into the budget the necessary funds to plan, build and install facilities for the permanent disposal of Angra´s radioactive waste.

The court verdict was in response to legal action brought by the public prosecutor’s office in 2007 after a civil lawsuit was filed to protest the storage of hazardous waste in temporary installations since the 1980s, which posed a risk to public health.