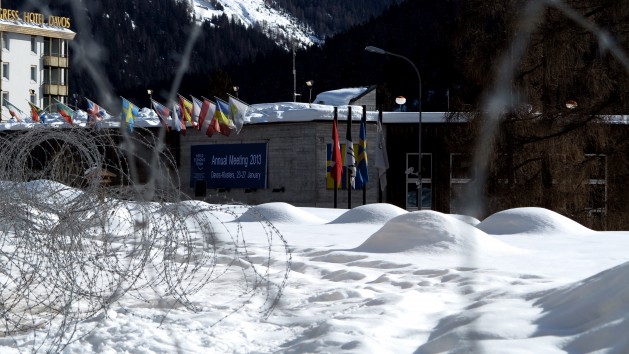 DAVOS, Switzerland, Jan 22 2014 (IPS) - With no acute crisis on the radar, this year’s Annual Meeting of the World Economic Forum (WEF) will move away from the response mode of the past years and “look for solutions for the really fundamental issues,” its founder Klaus Schwab said at the pre-meeting press conference.

“We cannot afford to allow the next era of globalisation to create as many risks and inequities as it does opportunities,” Schwab wrote in a blog post a few days earlier. “Today we face a situation where the number of potential flashpoints are many and are likely to grow.”

Hardly any of the workshops scheduled specifically address developing countries.

Even Schwab and his organisation have finally realised that globalisation has increased global inequality and that its consequences have not been managed and mitigated well on the global level.

According to Schwab, the WEF is the “biggest assembly of political, business and civil society leaders in the world.” For decades, he has been gathering the world’s richest and most powerful people and companies once a year in the mountain resort of Davos under the banner of “improving the state of the world”.

This year, the annual meeting beginning Wednesday takes place for the 44th time. Schwab welcomes around 2,500 participants, among them more than half of the CEOs of the 1,000 largest companies of the world, over 30 heads of state, and numerous leaders of international institutions.

A report published by the WEF has spoken of widening income disparities. The report states that increasing inequality impacts social stability within countries and threatens security on a global scale.

“It’s essential that we devise innovative solutions to the causes and consequences of a world becoming ever more unequal,” its authors wrote.

With a well-timed report, the renowned aid and development charity Oxfam International picked the issue up this week. According to Oxfam, the world’s richest 85 people own the wealth of half of the world’s population – a fact that the charity’s executive director Winnie Byanyima called staggering.

“We cannot hope to win the fight against poverty without tackling inequality,” she said. Oxfam locates the roots of the widening gap in fiscal deregulation, tax havens and secrecy, anti-competitive business practice, lower tax rates on high incomes and investments and cuts or underinvestment in public services for the majority.

According to Oxfam, the richest individuals and companies hide trillions of dollars in tax havens around the world. “In Africa”, the report says, “global corporations – particularly those in extractive industries – exploit their influence to avoid taxes and royalties, reducing the resources available to governments to fight poverty.”

Over the last years, tax avoidance has become a major focus of non-governmental organisations especially in countries like Switzerland, where some of the world’s biggest companies involved in raw materials mining and trade have their headquarters.

ActionAid doesn’t participate at the WEF, which Hojsik calls a talking shop for elites in a fancy resort. “Real progress requires commitment from governments and processes that are inclusive of all stakeholders including people living in poverty,” he said.

Hojsik has no illusions about Davos: “This year, Deloitte, a company among other things advising companies how to avoid taxes when investing in Africa, is tweeting about income disparity on their #DeloitteDavosLife event, clearly showing some of the absurdity.”

Unlike ActionAid, Oxfam will take part at the global leaders’ meeting. The charity is asking participants to pledge to supporting progressive taxation, to making public all the investments in companies and trusts, to demanding a living wage in their companies and to challenging governments to use tax revenue to provide universal healthcare, education and social protection for citizens.

Oxfam’s effort is doomed to fail. A look at the WEF’s more than 260 sessions shows that hot potatoes like tax avoidance won’t be addressed. Even though there is a workshop specifically on the extractive industry, it aims only to discuss how the industry may drive growth in the future in the light of rising concerns over scarcity and environmental deprivation.

Hardly any of the workshops scheduled specifically address developing countries. There’s a session on the post-2015 development goals, however. It asks how a new spirit of solidarity, cooperation and mutual accountability may carry those goals from vision to action.

“We lobby at the Swiss government which makes more sense,” he told IPS. As a discussion forum, the WEF in Niggli’s opinion doesn’t have any influence at all on defining the post-2015 development agenda.

Niggli said that it is in any case not the WEF’s official programme with all the debates and workshops that draws businessmen and politicians, but the opportunity they have to meet others informally or set up new projects behind closed doors.

Surely it also isn’t the fake refugee camp the WEF has set up in Davos that draws the global elite. “We are simulating the experience of a Syrian refugee in a Jordanian refugee camp,” Schwab said. “It is so important that people can really imagine what it means to be a refugee.”

The United Nations Refugee Agency has appealed for 6.5 billion dollars for Syrian refugees. International donors have pledged 2.4 billion dollars so far. If the WEF is serious about “improving the state of the world”, its wealthy members could come up with the lacking sum.