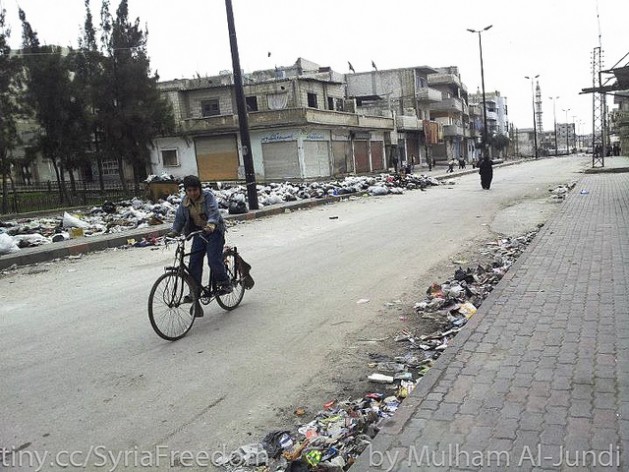 Garbage piles up in the streets of Homs, Syria. Credit: Freedom House/cc by 2.0

KUWAIT CITY, Jan 15 2014 (IPS) - As Secretary-General Ban Ki-moon grimly predicted a worsening of the monumental humanitarian disaster in war-torn Syria, the international community Wednesday pledged over 2.4 billion dollars in new funds to help the displaced and devastated in the politically-troubled Arab nation.

Saudi Arabia and Qatar, two other oil-blessed Middle East monarchies, pledged 60 million dollars each, while Germany contributed about 109 million dollars – but all of them lagged behind Kuwait.

Additionally, over 400 million dollars were pledged by non-governmental organisations (NGOs) and charitable institutions at a meeting held Tuesday, also in Kuwait city, under the auspices of the Kuwaiti government, taking the estimated total to over 2.8 billion dollars.

The exact figure will be announced shortly, said Ban, who expressed satisfaction with the numbers – and counting.

Still, the total fell short of the 6.5 billion dollars, described as the largest ever for a humanitarian emergency, which the United Nations requested for 2014.

Asked about the shortfall, Under-Secretary-General Valerie Amos, who heads the U.N.’s emergency operations, told reporters the 6.5 billion dollar figure was not the U.N.’s target at the pledging conference.

“That was the amount needed for the whole year,” she added, describing the outcome of the conference as “very successful.”

The pledging conference was characterised by a doomsday portrayal of Syria where 9.3 million Syrians, almost half the country’s population, are urgently in need of humanitarian aid.

The new statistics unfurled were staggering: more than two million children out of schools; two out of every five hospitals no longer functioning and nearly half the ambulance fleet stolen, burned or damaged beyond repair; about half the country’s doctors, in some areas, forced to flee; and the nightmare of polio threatening to make an unwelcome come back.

“Some parts of the country have just one hour’s electricity each day. And many people cannot be sure their drinking water is safe,” the secretary-general told donors.

He said any political recovery will need to be built on sustained humanitarian aid and long-term development assistance.

The first pledging conference held in January last year, also in Kuwait City, raised over 1.5 billion dollars from 43 donors, including 300 million dollars from Kuwait. About 90 percent of the pledges were delivered, Amos said at the news briefing Wednesday.

These funds helped provide safe drinking water for 10 million people in Syria last year, and enabled healthcare organisations to service more than three and half million people, and vaccinate over a million children, according to the United Nations.

Amos told donors that when she visited Syria nearly two years ago, only about one million people were in need of urgent humanitarian assistance.

That figure, she pointed out, now stands at 9.3 million – “around the population of Chad, Sweden or Bolivia.” And nearly six million people are internally displaced in Syria.

“The very fabric of society has unraveled, and sectarianism has taken hold with numerous examples of communities targeted because of their religion,” Amos said.

She was particularly troubled by the persistent reports of people running out of food in some of the besieged communities.

After announcing the 380-million-dollar U.S. contribution, Kerry told donors: “We are under no illusion that our job, or any of our jobs here, are to just write a cheque.”

He accused the Syrian regime of using starvation as a weapon of war and refusing aid workers access to people caught in the crossfire.

“If the regime can allow access to U.N. and international weapons inspectors, surely it can do the same for neutral international humanitarian assistance,” he added.

Since the conflict began in March 2011, the United States has been the largest single contributor, providing over 1.7 billion dollars in humanitarian aid.

Asked roughly what percentage of donor funding for humanitarian assistance is earmarked by the donors themselves, Jens Laerke, spokesperson for the U.N. Office for the Coordination of Humanitarian Affairs (OCHA), told IPS: “We cannot give a percentage.”

“And some donors prefer to give money more flexibly so the humanitarian partners can decide where it is most needed,” he added.

Asked if “tied” aid would not apply to Wednesday’s pledging conference – primarily because all of the funding is meant for Syria, Laerke said: “Yes, all funding from this conference is meant for humanitarian action in Syria or neighbouring countries”.

These countries, including Jordan, Lebanon, Turkey, Iraq and Egypt, are now home to over three million Syrian refugees who have fled the country.

Asked about the time lag between pledges and delivery, he said: “ There is often a time lag in reporting about when and how money was given or spent. It is ultimately up to the pledging donor to ensure that pledges are delivered.”

Ban said all of the affected families in Syria know that humanitarian aid can save lives – but it cannot resolve this crisis.

The United Nations is one of the sponsors of an international conference on Syria, set to begin Jan. 22, which aims to bring the Syrian government and opposition to the negotiating table.

“I hope this will launch a political process, establish a transitional governing body with full executive power, and most importantly, end the violence,” he declared.