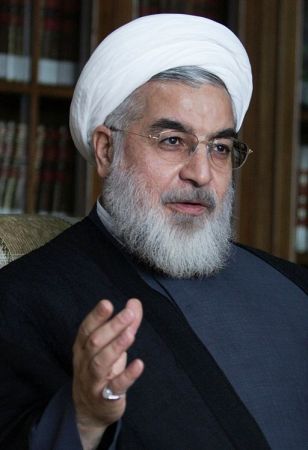 His appeal is not likely to set off a gold rush; investors will wait to see if the nuclear agreement with the P5+1 is successfully concluded sometime this summer.

But broadening his call for engagement with the rest of the world beyond the nuclear deal indicates that his initiative is more than a charm offensive; it represents deeper social and economic change in Iran.

The implicit assumption behind the “charm offensive” discourse is that the Iranian leadership is only engaging in talks because it needs to gain some respite from sanctions to buy time to reach nuclear weapon capability.

But luring foreign investors into Iran does not fit well with that strategy because any gains would only become apparent after the nuclear deal is concluded and would be reversed as soon as the deal falls apart and sanctions are once again implemented.

From Rouhani’s perspective, an open invitation to foreign investors risks expanding the ranks of his domestic foes beyond the growing opposition to the nuclear deal. Why add Islamists and leftists opposed to the penetration of Western culture and capital unless he really believes he can turn Iran into a hospitable place for outside investment?

Mark Landler of the New York Times played down Rouhani’s appeal by noting its “eerie echo” to a similar pitch by former Iranian president Mohammad Khatami in 2004, which was followed by Mahmoud Ahmadinejad’s ascendance a year later and a decade of hostility.

Suggesting that Rouhani’s Davos promises might end similarly ignores several important differences between the two presidents and between the Iran of 2014 and that of 2004. Ignoring the obvious — in 2004 Khatami was on his way out while Rouhani is just starting his first term — there are at least two other distinctions.

Philosophically, Khatami and Rouhani share a moderate view of coexistence with the West, but when it comes to economic integration, they read from very different scripts.

Iran’s economy in 2014 bears little resemblance to that of a decade earlier. In 2004, thanks to a massive oil boom, Iran was bursting with economic optimism and feeling prosperous without foreign investment. Since the 1970s, except during the reconstruction period after the war with Iraq, Iran has not sought or depended on foreign investment for its economic growth.

Higher oil prices nearly tripled the oil revenues in Khatami’s last budget in 2004 compared to his first in 1998. Unemployment had been declining steadily, from 14.3 percent in 2000 to 10.3 percent in 2004, and inflation seemed low by today’s standards — averaging 14 percent per year instead of 35 percent in the last two years.

Today, after several years of harsh sanctions, Iran’s economy is in deep trouble and the government is broke. While inflation is coming down, unemployment is still above 14 percent (above 25 percent for youth). The 4.2 billion dollars that the U.S. is releasing as part of the interim Geneva agreement adds only five percent to this year’s budget. It will not go very far in bringing public investment even close to its historical record of more than 15 percent of the GDP.

Public investment for the Iranian year starting this March is only 15 billion dollars, which is four percent of the GDP. It is not even enough to pay for the repair of — much less build new — public infrastructure or assist the private sector. The government actually owes private contractors about 20 billion dollars for work they have already performed on various public projects.

The private sector is also in a serious bind. In addition to unpaid government bills, the depressed economy has cut demand for its products, leaving many employers short of cash to even pay their workers. The auto industry, which was a focus of Rouhani’s appeal at Davos, is producing at less than half its capacity. The interim agreement restores the auto industry’s access to critical imports, but additional capital is what they need to create new jobs.

While financial necessity may be Rouhani’s reason for inviting foreign businesses to Iran, he also has reasons to be optimistic about the outcome of their engagement. First, he knows that more than three decades of revolutionary rhetoric and eight years of failed populist economic policies under President Ahmadinejad have tired out the general population and caused a major shift in the attitudes of Iran’s intellectual and technocratic classes.

There is now a wider consensus in favour of private enterprise and engagement with the global economy than during the time of the Shah. This is why Rouhani has the most pro-business economic team in Iran’s history.

Second, in the last 10 years, Iran’s workforce has become younger, better educated, and less expensive — all attractive features for foreign capital. The loss of value in Iran’s currency last year has brought labour costs in Iran below that of China. Were it not for their lower productivity, Iranian industrial workers would be able to outcompete East Asian workers. Foreign investment along with its superior technology and management is what Iran needs to raise its workers’ productivity.

The fate of global engagement for the Islamic Republic is not solely determined by these economic calculations. Many in the highest position of political power in Iran view rapprochement with the United States, which Rouhani considers a condition for meaningful global engagement, with deep suspicion.

They fear that hostility toward the Islamic Republic runs deeper than the nuclear issue. They point to new sanctions legislation before the U.S. Senate that requires Iran to make concessions unrelated to the nuclear dispute. A New York Times editorial did much to justify their fears by recommending that “Iran’s full reintegration into the international system” should depend on its “ending the hostility toward Israel.”

For Rouhani, after Davos, the path to global engagement remains uphill.

*Djavad Salehi-Isfahani conducts research on the economics of the Middle East and is currently a professor of economics at Virginia Tech. He is a nonresident senior fellow at the Brookings Institute and is also serving as the Dubai Initiative fellow at the Belfer Center for Science and International Affairs at Harvard University’s John F. Kennedy School of Government.