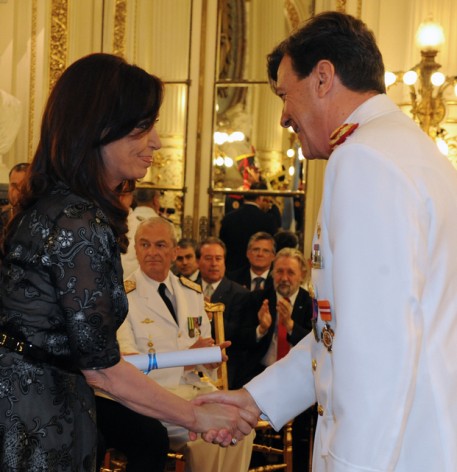 BUENOS AIRES, Jan 8 2014 (IPS) - The ratification as Argentina’s army chief of an officer accused of involvement in crimes against humanity during the 1976-1983 dictatorship has revived the debate about the thin line between the moral and judicial responsibility of those let off the hook by an amnesty law for merely “following orders”.

The Argentine Senate approved Major General César Milani’s promotion to lieutenant general on Dec. 18, 2013, thus upholding his June appointment as army chief of staff despite the shadows cast over his past, when he served as second lieutenant in the northern province of La Rioja during the military regime.

On Jan. 3, Milani resigned as director-general of army intelligence. The fact that he had continued to hold that post after he was named head of the army had fanned the controversy about him and his unprecedented power as both chief of staff and head of intelligence.

Milani claims he did not know what was happening in La Rioja Battalion 141, where he was deployed during the dictatorship.

But journalist Guillermo Alfieri, who was held as a political prisoner in La Rioja from 1976 to 1980, doesn’t believe him. “Milani isn’t showing the naïveté of Heidi [the character in the classic Swiss children’s novel] but the hypocrisy of Tartuffe [the opportunistic imposter in Molière’s famous comedy],” he told IPS.

Milani argues that he was young and was following orders, and says he was not aware of the human rights abuses taking place in that province.

But he is implicated in three lawsuits brought by families of victims of the dictatorship.

One of them involves the disappearance of La Rioja conscript Alberto Ledo.

Milani signed a document stating that Ledo had deserted his battalion. The young soldier was last seen in 1976 in the northern province of Tucumán, during Operation Independence, which ended in generalised repression under the pretext of eliminating a guerrilla group.

In his autobiography “Ver de memoria”, Alfieri describes the repression in La Rioja as “state terrorism”.

He said he met Ledo because they had friends in common in La Rioja, and described him as “a friendly, respectful and respected young man who loved history, was a musician who kept gatherings lively, and had left-wing ideas that he expressed with restraint.”

Milani’s promotion was approved by 39 to 30 votes in the Senate, after his designation in June as army chief of staff by the left-leaning government of Cristina Fernández, which invoked the presumption of innocence.

“I cannot, on the basis of mere suspicions, execute or lynch a general,” argued Senator
Aníbal Fernández (no relation to the president) of the governing Frente para la Victoria.

Human rights organisations and 1980 Nobel Peace Prize-winner Adolfo Pérez Esquivel considered Milani’s appointment a setback, because it revived the argument of “due obedience,” the name of a 1987 law that protected from prosecution lower-ranking members of the military under the concept that they were following orders.

Milani’s designation as army chief shocked the public because the governments of late former president Néstor Kirchner (2003-2007) and his wife and successor Fernández took a proactive stance on human rights.

They promoted the repeal of the 1980s amnesty laws and backed the trials against human rights violators. Since 2003, 515 human rights abusers have been sentenced.

“It offends me that the government is protecting and promoting a member of that criminal apparatus, which tried to write Ledo off as a deserter,” Alfieri complained.

The Centre for Legal and Social Studies (CELS), a prominent human rights group, objected to Milani’s appointment in July, because of his alleged participation in human rights abuses.

The military chief asked to explain himself to CELS, which has been behind the trials of human rights violators, and in response to a questionnaire he argued on Dec. 13 that in La Rioja the repression was “passive and low-intensity.”

But Alfieri said that La Rioja actually had “the largest number of [political prisoners] in the country, in proportion to the number of inhabitants in the province.”

“In La Rioja an intense witch hunt was unleashed, with systematic torture, hellish transfers and prisons turned into concentration camps,” he said.

“Even the gymnasium in Engineers Battalion 141 was used to warehouse detainees in bulk in the early days of the dictatorship,” he said, adding that there was no way that Milani hadn’t known what was going on.

They question what lawmaker Gabriela Cerruti of the Nuevo Encuentro party, a government ally, defined as “the threshold between judicial, political, moral and social guilt.”

The head of CELS, journalist Horacio Verbitsky, said Milani’s appointment was “a serious political error,” although he stressed that “asserting that this invalidates the human rights policy of the last decade reveals a deliberate bias.”

Political analyst and writer Alejandro Horowicz, author of the book “Los cuatro peronismos”, argued that it was important to go back to “the operating logic and patterns of the military repression.

“Irregular combatants had no rights, they could be tortured, raped and killed, and the perpetrators did not have to take responsibility for their own behaviour,” he told IPS.

According to Horowicz, by using “task forces” for fighting the guerrillas, the chain of command was suspended or subordinated to the heads of the operations.

In his view, Milani’s appointment should be understood in the context of the different approaches to “personal responsibility” in trying crimes against humanity.

“The first approach relegates the institutional character of each personal behaviour, to scrutinise the actions of the incriminated person,” he said.

“In the second, since everyone is innocent until proven guilty, the officers who have not been tried are innocent in an institution that is not,” he said.

“The third is that those who do not hold highly visible positions go unnoticed and are concealed by the broad mantle of the lack of legal charges,” he said.

Horowicz said the fact that Milani says he supports democracy “does not mean much politically” and his declaration to CELS “indicates that he is not willing, like the rest of officialdom, to take responsibility for anything.”

That would lead, he said, to a deeper analysis about “the democratic reconstitution of a military force in decomposition.”

“All you have to do is look at the behaviour of the armed forces throughout all these years, even after the repeal of the due obedience and full stop [a 1986 amnesty law that set a 60-day deadline for bringing legal charges in cases involving human rights violations] laws, to confirm that there is a willingness to do more of the same,” he said.

It also helps, he said, “to comprehend that it’s not about the names of individuals but about a decisive absence: of a genuinely democratic policy in the armed forces.”

The still unanswered question, he said, is why a government committed to human rights would decide to pay that political cost.

Was it a political error? Or perhaps, said Alfieri, a key move in guaranteeing governability at a moment of political crisis over allegations of corruption, a high inflation rate and police uprisings staged on the pretext of demands for a raise?

Perhaps the answers have to do with Fernández’s growing trust in Milani since he became head of military intelligence.

In the face of the lack of explanations, “speculation ranges between stubbornness, a strategy of turning the army into a nest of spies, and the unrealised dream of getting the military to align with popular sectors to promote the general welfare,” Alfieri said.

In any case it’s a double-edged sword, according to Horowicz, because “it diminishes the government’s manuevering room during crises.”