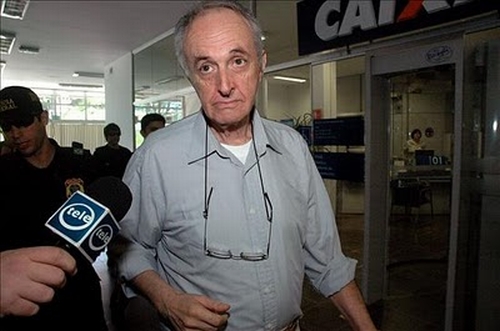 Manuel Cordero, captured on camera in 2009 by a journalist with Uruguay’s Channel 12 violating house arrest in Brazil. Credit: Canal 12

BUENOS AIRES, Mar 5 2013 (IPS) - The trial over a campaign of terror coordinated among the dictatorships of the Southern Cone of South America in the 1970s and 1980s began Tuesday in Buenos Aires with former dictator Jorge Rafael Videla as one of the main defendants, along with another 24 former military officers.

Under Operation Condor, as the coordination between the military dictatorships in Argentina, Bolivia, Brazil, Chile, Paraguay, Peru and Uruguay was known, opponents of the regimes were tracked down, kidnapped, tortured, transferred across borders and killed – including guerrilla fighters, political activists, trade unionists, students, priests, journalists or mothers demanding to know what had happened to their missing sons and daughters.

“This is the first time in Latin America that a trial is being held over Operation Condor, to prosecute those responsible, above and beyond trials held in some countries for specific cases,” lawyer Luz Palmas of the Fundación Liga Argentina por los Derechos Humanos (FUNLADDHH), a human rights organisation, told IPS.

The 25 defendants include Videla and other former generals like Reynaldo Bignone and Luciano Benjamín Menéndez. Uruguayan general Manuel Cordero, prosecuted for the role he played in the illegal detention centre at Automotores Orletti in Buenos Aires, was extradited from Brazil for this trial.

Three of the accused were declared unfit to stand trial for health reasons. Another 15 people under investigation died before the case came to trial.

“Orletti was an operational base for Condor. Foreigners who were kidnapped were taken there, which is why it was decided to take both the cases to oral trial together,” said Palmas, who represents survivors of the torture centre as well as victims of forced disappearance.

The trial that began Tuesday, which could stretch on for up to two years, is for the kidnapping and forced disappearance of 106 people. The largest group of victims were Uruguayans (48), but there were also Argentines, Bolivians, Chileans, Paraguayans and one Peruvian.

The case was initiated in 1999, when the two amnesty laws that put a stop to the prosecution of members of the military for human rights abuses committed during Argentina’s 1976-1983 dictatorship were still in force.

The lawsuit thus invoked forced disappearance as a crime against humanity that was not subject to amnesty.

After the amnesty laws were declared unconstitutional by the Supreme Court in 2005, along with the presidential pardons of former members of the military junta, the case picked up speed, more victims were included and more people came under investigation.

In the Orletti case, the crimes are illegal detention and torture. Sixty-five victims were identified, some of whom survived and, like Ana Inés Quadros, a Uruguayan citizen, have already testified in an earlier stage of the trial in 2010 against four torturers belonging to the Argentine intelligence services.

At that time, Quadros declared that she was kidnapped in Buenos Aires in July 1976 and taken to Orletti, where she was tortured and raped by Cordero. She was later transferred to an illegal detention centre in Uruguay, and eventually freed.

However, Cordero is only being tried for illegal detention under Operation Condor, and not for the crimes he committed in Orletti, because the Brazilian justice system did not grant extradition for that case.

In the view of Lorena Balardini, research coordinator for the Centre for Legal and Social Studies (CELS), a local human rights group, this trial “is the biggest to be held so far in the region over Operation Condor, and could serve as an impetus for other countries where there have been delays or backsliding,” she told IPS.

Balardini said there had been “a setback” in Uruguay. She was referring to a Supreme Court ruling in February this year overturning a lower court verdict to remove the statute of limitations on crimes of the 1973-1985 dictatorship, regarded as crimes against humanity.

“This trial is a way of making these abuses visible and judging them from the viewpoint of coordination between dictatorships,” she said. For this reason, CELS, in its capacity as legal representative of several victims, has focused on key cases in which that coordination is proven.

For example, CELS is representing the families of Marcelo Gelman – the son of Argentine poet Juan Gelman – and his wife María Claudia García Irureta. The couple was kidnapped in Buenos Aires in 1976 at the ages of 20 and 19 respectively, when García was seven months pregnant.

Gelman was killed and his body was identified in 1989, but García was taken from Orletti to Uruguay, where she gave birth to Macarena Gelman, who was finally tracked down at the age of 23 by her grandfather in 2000. García’s body has never been found.

Complaints will also be lodged on behalf of Horacio Campiglia and his secretary Susana Pinus, Argentine citizens who were kidnapped in Galeão airport in Rio de Janeiro in 1980 and were presumed to have been transferred to Argentina, where they disappeared.

In the context of Operation Condor, other famous cases were investigated specifically, such as the murders in Argentina of Uruguayan Congressmen Zelmar Michelini and Héctor Gutiérrez Ruiz in 1976.

Former Bolivian president Juan José Torres, who took refuge in Argentina after being overthrown by Hugo Banzer in 1971, was also murdered there in 1976.

According to lawyer Carolina Varsky, head of litigation at CELS, these murder cases were not included in the Operation Condor trial in order to evade restrictions imposed by the amnesty laws, and only cases of forced disappearance – considered “ongoing crimes” – were taken up.

As for the central role played by Chile’s DINA, the secret police of late dictator Augusto Pinochet (1973-1990), Varsky regretted the lack of progress in prosecuting direct or indirect agents of repression who participated in Operation Condor.

Essential evidence came from Paraguay, where lawyer and journalist Martín Almada discovered in 1992 what are known as the Archives of Terror in a police station in Asunción, containing innumerable documents shedding light on the fate of Operation Condor victims from the seven countries.

Further evidence is contained in declassified documents from the United States State Department, such as a 1976 memo from an FBI agent describing the coordinated actions of South America’s military regimes, which could go “as far as murder.”