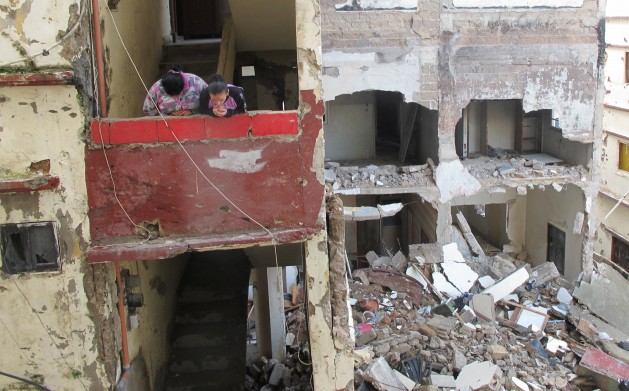 TRIPOLI, Lebanon, Jan 22 2014 (IPS) - In northern Lebanon’s largest city, Tripoli, Syria Street cuts through neighbourhoods that back opposite sides of the war raging in Syria, 30 km away. Clashes between them resumed this weekend after a cross-border rocket attack.

The frontline of the Jabal Mohsen area, overlooking the rival Bab Al-Tabbaneh, has been heavily scarred by 18 rounds of clashes since 2008. The area bears brutal signs: burnt shops, buildings pockmarked by mortar shelling, sheets of canvas riddled with bullet holes that have been hung across streets for protection from snipers.

Past checkpoints manned by the military, which was given control of security for six months after late November clashes left several dead and scores wounded, numerous schoolboys can be seen roaming Jabal Mohsen’s streets.

“But this is Lebanon. There are weapons and ammunition planted everywhere.”

While Bab Al-Tabbaneh is predominantly Sunni, the majority in Jabal Mohsen is Alawite.

Lebanese from the Alawite sect, the same minority group and offshoot of Shia Islam that Syria’s Assad regime belongs to, account for approximately 11 percent of the population.

“There are no elementary or high schools here and it isn’t safe for the boys to cross into Sunni areas,” said one shop owner.

Emad Salman, a 28-year-old house painter, told IPS he had been unable to leave the area for work since November and even those requiring medical care needed army escorts to get out.

“They’re all Al-Qaeda down there,” he said. “Fifteen men who left Jabal Mohsen to go to work were stopped and shot in the legs.”

The latest round of hostilities seems to have been sparked by attacks on two Sunni mosques, allegedly by members of the Jabal Mohsen community, in late August. Two car bombs exploded in front of the mosques, killing at least 47 people and injuring over 400.

Ali Eid, founder of the community’s Alawite Arab Democratic Party, did not comply with an Oct. 30 summons to answer to charges of smuggling a key suspect in the case across the border into Syria. His son and the party’s political leader, Rifaat Eid, then allegedly made inflammatory statements against the Lebanese security services.

A number of episodes targeting Alawites ensued, followed by clashes. The city was put under the control of the army for six months on Dec. 2.

On a visit to the area, IPS found the walls of Jabal Mohsen plastered with graffiti hailing the Syrian regime. A popular “trinity” poster showing the smiling faces of Syrian President Bashar Al-Assad, his father Hafez and Lebanese Hezbollah leader Hassan Nasrallah were ubiquitous.

In impoverished Bab Al-Tabbaneh, a group of adolescents told IPS with an air of defiance that two Alawite men had been stabbed as part of a “family” feud with the Sunni community.

In the cold wintry air, boys in their early teens warmed themselves in a garage that would be invisible from the hilltop of Jabal Mohsen. They said they were “getting ready for the revolution.”

A Sunni woman wearing a headscarf showed her torched shop, in front of which soldiers stood. The woman placed much of the blame on caretaker Prime Minister Najib Miqati.

Lebanon’s Tripoli is the birthplace of Miqati, a Sunni in the Hezbollah-dominated March 8 political coalition and the richest man in Lebanon, who made much of his wealth through a telecommunications company that works in Syria and emerging markets. Lebanon has not had a government since late March when the one under Miqati resigned.

Mustafa Allouch, head of the Tripoli section of the Future Movement that is part of the March 14 political coalition, holds the Syrian regime and its decades-old interference in Lebanon responsible for the unrest.

Syria maintained a military presence in the country for around 30 years until 2005, when it was forced to pull out after massive protests and international pressure following the assassination of then prime minister Rafiq Hariri.

Hezbollah, allied with the Assad regime and heavily funded by Iran, has never been forced to lay down its weapons, and is generally deemed more powerful than the Lebanese Armed Forces.

Allouch, chief surgeon at a local hospital, noted that Hezbollah had long openly admitted to taking part in the Syrian Civil War.

Acknowledging that a number of figures from the March 14 Coalition had also been accused of sending weapons into Syria to back the rebels, Allouch said he, too, had been accused of it – by his own cousin.

“My mother is Alawite,” he said, “and I have an uncle who is a general in the Syrian regime. He told his son this, and he believed it. I just laughed and told him that if I had the means to do so, I would,” said Allouch, who as a teenager fought as a Marxist with the Palestinian forces early in the Lebanese Civil War (1975-1990).

In any case, the amount of arms entering Syria from Lebanon is nowhere near that coming in from Syria’s other borders, he said. “But this is Lebanon. There are weapons and ammunition planted everywhere.”