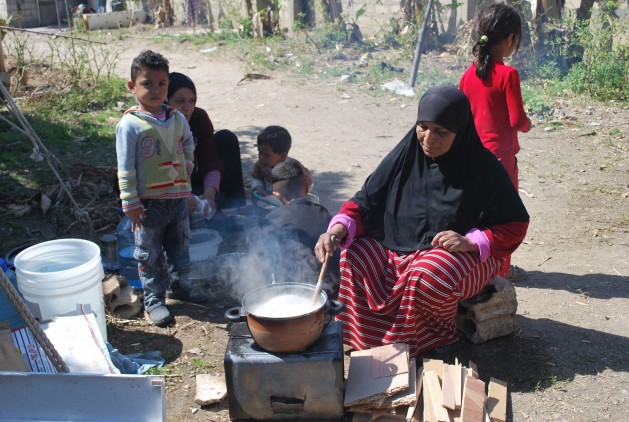 BEIRUT, Jan 6 2014 (IPS) - Over the past year more than 50,000 Palestinian refugees have fled violence, chaos and destitution in Syria to seek sanctuary in Lebanon. The vast majority have found themselves living in dire poverty, and trapped in chronically insecure existence.

Denied assurances of legal residence many are unsure if and how they can continue to live in the country into the New Year.

“Who, I mean really who from the Palestinian families can pay 200 dollars for the papers for every family member? If the average family is five people, then that is 1,000 dollars. This is impossible as we know most Palestinian refugees aren’t even sure how they are going to feed their children one day to the next,” Mahmoud Assir Saawi, president of the Council for Palestinian Refugees Fleeing from Syria told IPS.

Such sentiments are reiterated time and time again within the squalid camps and overcrowded ghettoes throughout Lebanon. Palestinians arriving from Syria find themselves in an administrative and bureaucratic morass hobbled by decades of troubled history and war that offers them scant security.

Many of the Palestinian refugees from Syria will have originally been uprooted from their homeland in 1948 upon the creation of the state of Israel, or during the six-day war in 1967 when the Israelis comprehensively defeated the neighbouring Arab armies. New war has exacted its toll and around half of their communities in Syria have fled once again.

Lebanon has received most of this exodus, and of Syria’s neighbours it is perhaps least able to accommodate the influx.

The presence of hundreds of thousands of Palestinians in Lebanon has always been a highly divisive issue, with many Lebanese blaming Palestinians for the role they played in the nation’s rancorous civil war from 1975 to 1990. The arrival of large communities of their compatriots this past year has further exacerbated existing fears and prejudices.

It is perhaps for this reason that the arriving Palestinians have been classified as ‘guests’, ‘migrants’ or ‘displaced people’. To afford them the more apt title of ‘refugee’ would bring with it legal obligations, most notably under the Geneva convention, which Lebanon would struggle to realise.

Fears of Palestinian, and even Syrian refugees settling in Lebanon permanently, and thus shifting the precarious sectarian balance within the country, are common and are regularly aired in the media and by politicians. As such the refugees’ status remains vulnerable and their sanctuary insecure.

Securing residency papers remains one of the biggest problems for Palestinian refugees from Syria. Upon arrival Palestinians fleeing war and hunger are only granted a one-week visa in Lebanon, which then must then extend.

In the overcrowded and destitute Chatilla Palestinian camp in Beirut, refugees from Syria have staged sit-ins at the United Nations Relief and Works Agency (UNRWA) offices. The international organisation was already struggling to provide basic services to the approximately 420,000 Palestinian refugees already living in the country before the outbreak of the Syrian crisis. UNRWA has been tasked by the Lebanese government with extending these services to the new arrivals.

Palestinian journalist Maher Ayoub from Yarmouk Camp in Damascus knows first hand about the vulnerability of life in Lebanon. On a recent trip to renew his papers he was ordered to leave the country within the week, despite assurances from the Lebanese government that it would not throw out any refugees.

Faced with incarceration in Lebanon or a perilous return to Syria, he has taken refuge in one of the Palestinian camps Lebanese security services are not allowed to enter under an agreement reached at the end of the civil war.

“Where can I go? What can I do? I have no options now,” Ayoub told IPS.

Many other Palestinian refugees distrustful of the security services or fearful of being unable to pay their annual visa renewal fees are seeking cover within the camps. The reality is a life of incarceration in chronically overcrowded hovels of destitution where unemployment is rife.

“We know they are our brethren and we must help them but this is becoming untenable,” said Abu Ahmad, a Lebanese-Palestinian resident from Chatilla camp. “I used to get at least a week’s work every month but now there is nothing. Every day we are seeing problems in the camp because of the desperation and the lack of work. People are even starting to pull weapons on each other. We need more support.”

A UNRWA report showed a shortfall in the organisation’s budget by 68 million dollars. The different Palestinian factions have proven unable to absorb the strain.

For the Palestinians fleeing Syria’s war the struggle looks set to continue in 2014 as they try to build a semblance of stability in their lives.