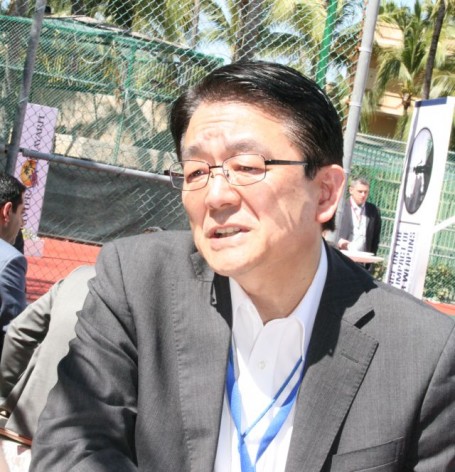 NUEVO VALLARTA, Feb 15 2014 (IPS) - Countries in favour of nuclear disarmament have reached the point where they are ready to set a date for the start of formal negotiations to eliminate nuclear weapons, a decision that could be taken in Austria at the end of this year.

This was the general sense at the close on Friday Feb. 14 of the two-day Second Conference on the Humanitarian Impact of Nuclear Weapons, held in the tourist centre of Nuevo Vallarta in western Mexico. Delegates from 146 nations and over 100 non-governmental organisations from all over the world were in attendance.

"We are more advanced than the nuclear powers in acknowledging that there should be no weapons.” -- Hirotsugu Terasaki, vice-president of Soka Gakkai International

Participants denounced the humanitarian effects of possession and use of nuclear arsenals and sent a powerful message in favour of the destruction of all nuclear warheads, 19,000 of which are still in the possession of China, France, India, Israel, Pakistan, Russia, the United Kingdom and the United States.

“It’s a step towards a road map for the objective of prohibition, and I assume that the third conference will provide the road map for that aim. We are more advanced than the nuclear powers in acknowledging that there should be no weapons,” Japanese Hirotsugu Terasaki, vice-president of Soka Gakkai and executive director of Peace Affairs of Soka Gakkai International, a pacifist Buddhist organisation, told IPS.

“It’s about the creation of an environment for abolition [because] the nuclear powers defend non-proliferation, but they maintain their arsenals,” he said at the conference.

The Austrian government announced on Thursday Feb. 13 that they would host the third conference at the end of the year. It will precede the 2015 Review Conference of the Parties to the Treaty on Non-Proliferation of Nuclear Weapons (NPT), the main binding international instrument for limiting atomic armaments, which has made no progress for the past 15 years.

Héctor Guerra, the coordinator for Latin America and the Caribbean of the International Campaign to Abolish Nuclear Weapons, which has a membership of 350 organisations from 81 countries, told IPS that the process “is ready for the next steps and for the transition” to a “binding international instrument for the elimination” of nuclear weapons.

Ideally, “the entire international community” would participate, but if the nuclear powers abstain, “there is no problem,” said Guerra. In his view, the new treaty “would establish international regulations that would facilitate the delegitimisation of the weapons in international negotiations.”

As with the Oslo conference in 2013, the five nuclear powers authorised by the NPT (U.S., China, France, U.K. and Russia) were not present at Nuevo Vallarta.

Pakistan, however, was present, although like Israel and India it has not signed the NPT, which currently has 190 states parties.

Since the Oslo conference, the abolitionist movement has made headway in the denunciation of humanitarian impacts. In May 2013 the preparatory committee for the NPT Review Conference highlighted this angle, as did the General Assembly of the United Nations a few months later in New York.

At Nuevo Vallarta the factors of human error and technological failure in the maintenance and management of nuclear arsenals came under scrutiny, illustrated in detail by journalist Eric Schlosser in his book “Command and Control”.

“Many times the arms were almost used due to miscalculation and mistakes,” Patricia Lewis, the head of international security research for the London-based NGO Chatham House, told IPS.

“The probability is greater than what we know and we have to consider what we don’t know. Today’s situation is even riskier,” she said.

Lewis presented the findings of a study in which she and her team reviewed nuclear incidents in tests, military exercises and potential risk alerts between 1962 and 2013, involving the U.S., the former Soviet Union, the U.K., France, Israel, India and Pakistan.

Among its results, the study found lax physical and operational security practised at all levels by the U.S. air force.

Until all warheads are eliminated, Lewis recommended avoidance of large-scale military exercises at times of high political tension, and slowing the triggering of attack threat alerts.

Terasaki concluded that “nuclear weapons have made humanity their hostage.”

In Guerra’s view, a ban on nuclear weapons should be in place by 2020. “The political conditions are becoming ripe for negotiations,” which should be carried out in the U.N. framework, he said.