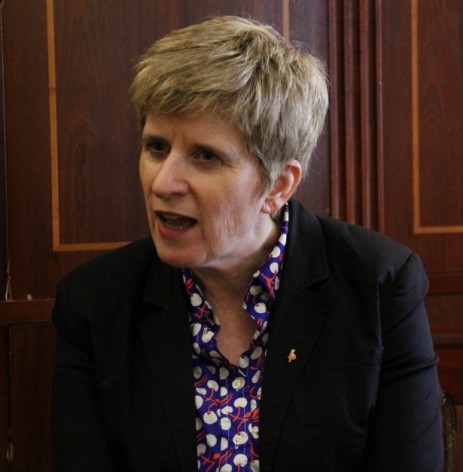 Kate Gilmore, deputy executive director of the United Nations Population Fund, says we have failed to protect our girls from early marriage, from gender-based violence and from early pregnancies. Courtesy: Livia Maurizi/UNFPA

JOHANNESBURG, Feb 28 2014 (IPS) - “The future is today aged 10 and it’s an adolescent girl,” Kate Gilmore, deputy executive director of the United Nations Population Fund (UNFPA), said in an interview with IPS in Johannesburg.

Gilmore discussed the impact on African youth of the last two decades of action on sexual and reproductive health and equal access to education for girls, which are assessed in the International Conference on Population and Development (ICPD) Beyond 2014 Global Report.

The report was released on Feb. 12, the anniversary of the 1994 ICPD, where 176 countries agreed on a 20-year Programme of Action, also known as the Cairo Consensus. This is a good opportunity to assess the gains and challenges of the ICPD, said Gilmore.

Q: What has the global community achieved for young people in the last 20 years?

A: One of the really groundbreaking outcomes of the ICPD was the commitment to sexual and reproductive health, making it a human rights project and not a population control project, not a project about controlling women’s fertility but a project about empowering women to be in charge of their bodies. It was a really cool shift that created transformation in public policy.

The past 20 years has also seen 1,2 billion people lifted out of poverty, a 42 percent decline in maternal mortality, and 90 percent of children passing through primary school.

Q: What economic gains have been made in Africa?

A: We have not made much economic gains in terms of addressing disparities.The gap between the rich and poor has gotten bigger within countries and between countries.

UNFPA is calling on Member States to commit to legislative and policy reform that says there is no place for inequality, discrimination and marginalisation in our society.

A: Yes, but this is a shared failure, because states also have a responsibility. We have failed to protect our girls from early marriage, from gender based violence and from early pregnancies. Governments need to realise that, unless we change the trajectory of adolescent girls on their journey to adulthood, there will be no development that is more sustainable, inclusive and resilient.

When you change the trajectory of the adolescent girl, everything changes in a community. Looking at all the data from the past 20 years, we can see clearly that what happens to the adolescent girl in the next 15 years, that is what will make or break the future.

Q: How do we invest in young people?

A: By engaging with governments and saying, let us have a look at your national strategies and priorities, let us give you access to the best technical wisdom. We also look into the best way to get the best benefit from having a healthy young population: changing health systems, improving education systems, creating spaces for young people to hone their entrepreneurial skills in new sectors.

Q: How has Africa addressed adolescent sexual and reproductive health?

A: Through deliberations of the African Union, we have seen increasing attention to sexual and reproductive health and rights. However, I do believe it has not always been identified as a young person’s issues. But, as governments have become sophisticated in the analysis of demographic realities, it has become clearer that when we talk about maternal mortality, HIV and AIDS, unsafe abortion, early marriage, fistula, and female genital mutilation, we are talking about young people.

Q: Why is it important to address the youth bulge in Africa?

A: Africa is a young person’s continent. The median age in most countries is 30 years and in Africa it is 20 years. If you want to make the youth cohort the fuel for driving economic prosperity, social stability and good governance, give them access to education and keep them healthy.