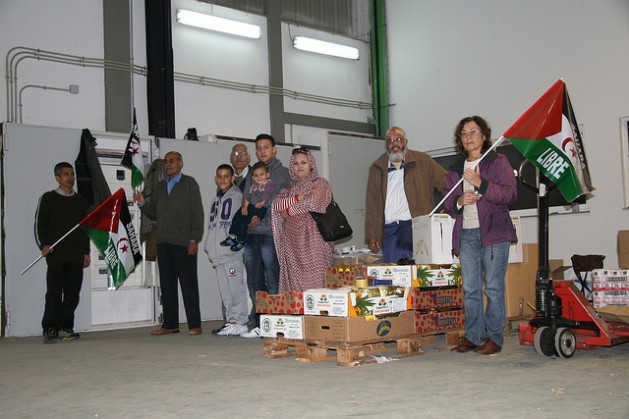 Members of the Malaga Association of Friendship with the Saharawi People in the storehouse where they collected food to be sent with the Caravan for Peace to the Saharawi camps at Tindouf, in the Algerian desert. Credit: Inés Benítez/IPS

MALAGA, Spain, Feb 19 2014 (IPS) - Volunteers are hard at work in an industrial warehouse in the Spanish city of Malaga, organising thousands of kilos of rice, sugar, lentils and oil to be shipped this February to Saharawi refugee camps in Tindouf, in the west of Algeria.

“We hope to send some 60,000 kilos of basic foods,” said Isabel González, the president of the Malaga Association of Friendship with the Saharawi People (AMAPS), as she showed IPS the boxes piled on wooden pallets in the storehouse outside Malaga.

This is a common sight here and in other Andalusian cities this month.

“The problem is not food. A long-term solution is needed, and it involves a political solution to the conflict.” -- Saharawi, Ahmed Sid Ahmed

On Saturday Feb. 15, in Malaga and other Andalusian cities, trucks were being loaded to form part of the Caravan for Peace, which will leave the eastern city of Alicante for Oran in Algeria on Feb. 22, and then continue into the desert.

After Spain abandoned Western Sahara, formerly under its dominion, in 1975, thousands of Saharawis fled the Moroccan troops who occupied the territory. Now the refugees are living in the Tindouf camps.

In addition to the solidarity practised by citizens, Spain must make “a political commitment” that will repay its historical “debt” to the Sahara, González said.

The desert in Tindouf “is no place to live. There is nothing there,” she said.

Every year, Saharawi children aged seven to 12 travel to Spain to spend the hot summer months of July and August with volunteer families all over the country.

The Vacations in Peace programme was initiated in 1993, after the ceasefire between Morocco and the Polisario Front, the leading group of the Saharawi Arab Democratic Republic, also known as Western Sahara.

Participants in these holidays can brush up on Spanish, their second language, “live in a different reality and bring a message of peace,” González said.

During their first week in Spain the Saharawi children are given medical checks and receive any necessary treatment, thanks to an agreement with the Spanish health services.

Since the inception of the programme, 30,000 Saharawi boys and girls have been welcomed into Spanish homes, according to the Andalusian Federation of Associations in Solidarity with the Sahara (FANDAS), which covers the eight Andalusian provinces.

“Children are the best ambassadors for their people’s cause,” said González. She highlighted the goals of awareness raising and denunciation in her association, which belongs to FANDAS.

In 2013, 81 Saharawi children came to Malaga, 1,400 to Andalusia as a whole and about 4,000 to the whole of Spain, González said. The economic crisis in this country has undermined support for the programmes, which are carried out in coordination with the Saharawi Red Crescent.

Antonia Silva, a nursing aide from Malaga, has been an AMAPS volunteer since 2005 because “it’s a human rights issue” of which “the public must be made aware,” she told IPS.

She hosted the same girl for four consecutive summers, but can do so no longer. At the age of 14, the teenager died of a liver tumour.

Rafael Gálvez, also from Malaga, founded a humanitarian association named MRABIH in honour of a Sahariwan friend who died. It set up an emergency healthcare school in the camps to train Sahariwa volunteers in first aid.

Gálvez also organises talks in Spanish schools, as well as sponsored runs and other activities to raise awareness and collect funds for food, medicines and clothes for the Caravan for Peace.

The caravan is a nationwide effort, but the regions organise their consignments on a rotation basis so that they reach Tindouf at regular intervals. Now it is Andalusia’s turn.

“It is the largest solidarity movement in Spain,” Abdalahe Jalil, the Saharawi delegate for the cities of Malaga and Granada, told IPS.

The aid effort has a humanitarian and a political side. On the political side, the associations and Saharawi delegates lobby political parties, unions and national and international bodies, putting pressure on them to hold a referendum for the self-determination of the Saharawi people.

According to repeated United Nations resolutions, when decolonising a territory the colonial power must hold a prior referendum on self-determination in the colony.

Saharawi activists complain of the neglect of the refugees in the Algerian desert camps, but also of imprisonment and torture of those who demand a self-determination ballot in the parts of Western Sahara occupied by Morocco.

“The voice of Saharawis in the occupied zone is not heard anywhere,” said Jalil, speaking from the warehouse where the food is stored.

“We disseminate what is happening: the injustice faced by political prisoners, the lack of freedom of expression and the violations of human rights,” he said.

Another Saharawi, Ahmed Sid Ahmed, who was a teacher of Spanish in refugee camp schools between 1989 and 2003, told IPS that food aid is basic for the survival of the refugees.

But “the problem is not food. A long-term solution is needed, and it involves a political solution to the conflict,” he said.

Ahmed, who has lived in Malaga since 2003 with his wife and three sons, aged 16, 12 and one, said many Spanish families who host Saharawi children visit the camps.

“Once a father took his 11- or 12-year-old son along so that he could see the situation that other children have to live in,” said Ahmed, who studied in Cuba and whose parents and siblings live in the camps.

Over the years the Malaga association has sent four ambulances, a water supply truck, furniture for 16 primary school classrooms and 1,200 solar panels for single family homes.

While the refugees barely survive in the Algerian desert, and are dependent on food aid, a fishing agreement adopted in 2006 by the European Union and Morocco allows European boats to fish in Western Sahara’s territorial waters. It is an agreement that Saharawi activists say represents the exploitation of their people’s natural resources.

The U.N. does not recogise Moroccan sovereignty over Western Sahara.

“Western Sahara is a magnificent example of how political and strategic interests can hamper the realisation of the principles and values enshrined in law,” the Spanish Society for International Human Rights Law concluded in its 2012 publication “Peace, migrations and the free determination of peoples”.