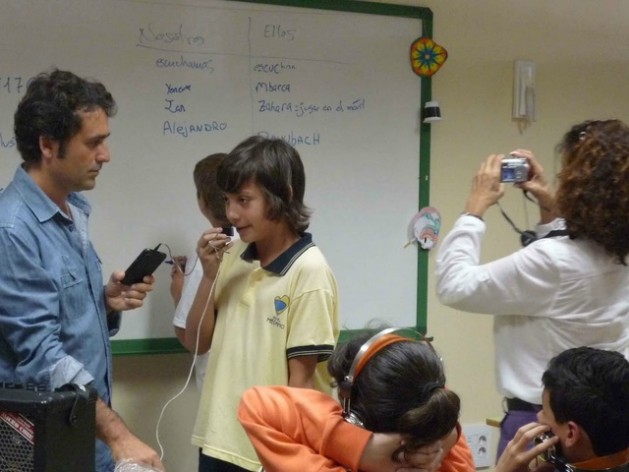 Students on the Spanish island of Tenerife talk to youngsters from a school in the Sahrawi refugee camps outside of Tindouf in western Algeria. Credit: Courtesy Red Canaria de Escuelas Solidarias

MÁLAGA, Spain , Jan 15 2014 (IPS) - Hundreds of students from Spain’s Canary Islands, Senegal and the Sahrawi refugee camps outside of Tindouf in western Algeria are meeting each other and breaking down cultural barriers thanks to the Red Educativa Sin Fronteras.

In the “Educational Network Without Borders”, students, teachers and parents build bridges between classrooms on both sides of the miles of Atlantic Ocean that separate them.

“Hi, my name is Ángel, I’m 13 years old and I go to school at the CEO (Centro de Educación Obligatoria) Mogán in the south of Gran Canaria Island. I would like to meet students from Senegal,” says one boy in a video taped by Ivanhoe Hernández, a teacher of literature from that school.

The CEO school arranges virtual and snail mail exchanges with the students of Mbake Gueye, who teaches Spanish in Louga in northwestern Senegal.

The RESF network is made up of volunteer teachers, parents and students from Senegal, Western Sahara and Gabon in West Africa, Haiti in the Caribbean, and the Canary Islands off the northwest coast of Africa.

It emerged in 2004, at the initiative of the Puente Humano or Human Bridge association, based in Senegal and the Canary Islands, with the aim of tearing down day by day “the wall of ignorance that exists between our people,” Amadou Ba, who also teaches Spanish in Louga, told IPS in a videoconference.

“We are teachers from both sides [of the Atlantic] and we propose a cultural and educational change that makes it possible to form global citizens,” Rafael Blanco, a teacher of Latin and Greek who belongs to Puente Humano, told IPS. He is the coordinator of RESF in the Canary Islands, and is presently visiting Senegal.

Ba, a 33-year-old who has been a teacher since 2004, said the communication between students from Africa and Spain focuses on specific subjects prepared ahead of time, such as immigration, family life or the environment.

“Hearing about the need to care for the environment, for example, from Spanish students of the same age reaches them better and sensitises them more,” said Ba, who teaches in the Artillerie Nord school in Louga, which coordinates RESF in Senegal.

As part of RESF, students between the ages of 12 and 16 write short reports, tape video recordings, ask and answer questions, take photos and make drawings that travel back and forth across the Atlantic by email or through the postal service.

The direct communications are through video conferences or audio conferences, using cellphones connected to speakers.

Blanco mentioned the material and technical difficulties in Senegal, where some of the schools involved do not have Internet connection, and where power cuts are frequent. For that reason, much of the communication depends on postal delivery services.

Puente Humano covers the cost of establishing Internet connections in the schools in Louga.

Some 650 students in 13 schools in Senegal currently interact with students and teachers in the Canary Islands.

Blanco estimated that another 720 students are involved in the project in the Canary Islands and in three schools in the Tindouf refugee camps – where almost all of the roughly 250,000 Sahrawi people live today, 1,465 km southwest of Algiers.

A school in Ansé a Pitres, in southeast Haiti, also took part in the exchanges in 2012, but did not continue in 2013 due to technical difficulties.

“Our aim is to multiply real cooperation by means of communication,” says the Puente Humano website.

Blanco believes “you can’t cooperate with something you don’t know,” and paraphrased
Madou Ndeye, a Senegalese teacher and writer who died in March 2013, who said “we would be more advanced if the money that went to cooperation and aid was dedicated to getting to know each other and communicate with each other.”

Ba said participation in RESF would encourage his students to take photos and tape short videos of their day-to-day lives in Louga, to share with the students in the Canary Islands.

“We have values, customs, rich things to show,” said Ba, who believes development aid projects carried out by non-governmental organisations “should not only be based on giving, but also on receiving.”

He also lamented that the information that reaches Europe from Africa “is only trade-related, because the business community isn’t interested in us communicating with each other.”

The teachers involved in RESF incorporate the student exchanges in their daily coursework. For example, a math teacher on the Canary island of Tenerife suggested that her students analyse “the statistics of inequality,” comparing the cost of living and of the basic basket of essential items in Spain and Senegal.

“Awareness-raising is the most important thing we have managed to do, with our students,” said Cristóbal Mendoza, a teacher in the Mario Lhermet school on the Canary island of La Gomera, in an interview broadcast by the Irradia radio platform, taped in Senegal during a visit by several Canary Islands teachers to Louga.

During the 2010-2011 school year, the coordination of RESF was incorporated in the Red Canaria de Escuelas Solidarias (roughly, the Canary Network of Schools in Solidarity), which carries out projects for educational cooperation with Africa.

RESF’s blog presents the different subjects, activities and experiences of the teachers of different subjects. Blanco and his students at the Instituto Cabrera Pinto school in Tenerife investigated myths from Spain and West Africa in a course on classic culture.

“They are in Senegal, but they have the same worries, fears, emotions and goals as you do,” Ivanhoe Hernández, originally from the southern Spanish city of Málaga, explains to his students in the Canary Islands.

He said “educating and learning together helps break down prejudice and racism.”

Blanco said in a videoconference from Senegal, where he is working on coordination of the network thanks to a one-year sabbatical leave: “We are creating a culture of knowledge directly, without depending on the television, making use of communication tools and technology, and in a language that allows people to communicate and share.”

The network has made possible exchange trips to Senegal for students and teachers from the Canary Islands and vice versa, where they visit schools, stay in the homes of local families, and become familiar with the culture.

As the Spanish government cuts development aid funds, RESF is growing in the number of students involved. And although the project is moving ahead “without haste” and represents “a few drops of water, that is a lot,” Blanco said.