Sponsor a University Student in Spain 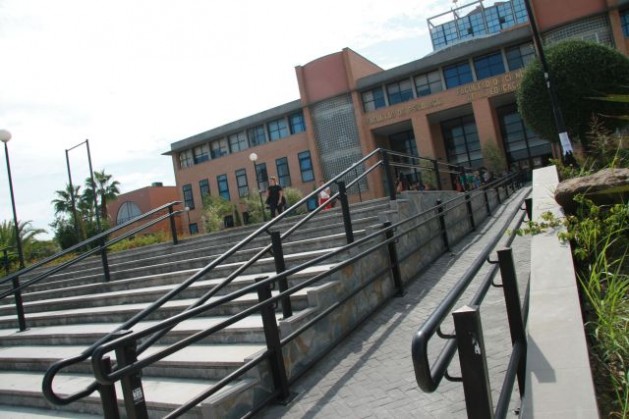 The steps to the university, increasingly inaccessible to students in Spain who can’t afford tuition. This is the entrance to the Psychology Faculty at the University of Málaga. Credit: Inés Benítez/IPS

MALAGA, Spain, Sep 25 2013 (IPS) - Adopt a tree. Adopt a polar bear. Sponsor a child in a poor country. The concept has caught on in Spain’s troubled academic system and now people and companies can sponsor a university student.

The “Higher Education Sponsorship Programme” at the public University of Málaga in southern Spain invites individuals or businesses to donate money to a fund to finance the tuition of new students who prove that they can’t afford to pay and who failed to earn the minimum grade of 5.5 out of 10 on the entrance exam to qualify for a state scholarship, a source at the university explained to IPS.

The sponsors will be given tax reductions, access to university services, and public recognition as donors.

The idea is “to sponsor a student, just like you would sponsor a child,” Adelaida de la Calle, dean of the University of Málaga and president of the conference of Spanish university deans, told the press.

“The Education Ministry should sponsor students instead of attacking the heart of the educational system by raising tuition and cutting scholarships.” -- Fidel González

Because the requisites for scholarships are stricter now and the amounts of aid granted have shrunk, there are fewer new students and more are dropping out after the first year, the spokesman for the Coordinator of Student Representatives of Public Universities (CREUP), Aratz Castro, a sociology student at the University of the Basque Country in northern Spain, told IPS.

Under a decree-law passed in early August, the minimum entrance exam grade for qualifying for free tuition the first year is 5.5 out of 10. But the minimum grade required for other kinds of direct financial aid, like free transportation, essential for poor students, was raised one point.

Sponsoring students “or any other initiative that complements the scholarship system is positive,” Castro said. But it should be public institutions that take on that mission, he maintained.

Fidel González, the president of the Federation of Associations of Progressive Students, said the University of Málaga’s idea is “a cry for help” in the face of the danger that “hundreds of students will be left out and others won’t be able to continue studying.”

But “this is not a question of charity or solidarity, but of social justice and equality,” González told IPS. He argued that it is the Education Ministry that should “sponsor students instead of attacking the heart of the educational system by raising tuition and cutting scholarships.”

In the 2012-2013 school year, the funds earmarked by the government for scholarships fell 8.3 percent, according to the annual report on academic statistics, Datos y Cifras del Curso Escolar, published Sept. 16 by the Education Ministry.

The number of beneficiaries of scholarships shrank by 24,520 students, 3.1 percent fewer than the previous school year.

And the proportion of students receiving any kind of aid, especially assistance for purchasing school materials, dropped by nearly 60 percent: 578,549 students were left without support.

In crisis-stricken Spain, the state has cut public education across the board. Some educational institutions in the eastern region of Valencia could not even afford to pay for heating in the winter of 2012.

“I’ve studied thanks to a scholarship over the past two years,” said Florencia Zucas, a fourth-year student of labour relations and human resources in the Faculty of Social Studies and Labour at the University of Málaga. “Without that, it would have been impossible,” she told IPS.

The university is 12 km from the home where Zucas lives with her uncle and aunt. The 25-year-old student, who is from Argentina, has lived in Spain for 13 years. She used to have a part-time job to earn money for tuition, but her wages were low and her work took time away from her studies, making it difficult for her to pass the majority of the courses she was taking – a requisite to maintain the scholarship.

“The state should pay,” Cristina Enamorado, 20, told IPS, as she headed in to take an entrance exam on the University of Málaga campus.

Enamorado wants to study early childhood education. Because of the lack of prospects, several of her friends dropped out of high school and moved to the United Kingdom or Germany.

Spain’s unemployment rate is the second-highest in the European Union, after Greece’s: 26.6 percent, according to the latest figures from the National Statistics Institute.

Many heads of households are now unemployed or have suffered wage cuts, and can’t pay tuition for their sons and daughters.

“My parents’ salaries have both gone down a lot,” said Martha Caparrós, 19. “Since the state doesn’t help, it’s ok for individuals or companies to lend a hand,” she said.

Sitting on the stairway outside the Law Faculty after taking her entrance exams, Caparrós told IPS that she would apply for a scholarship to study social education. Her brother is also starting university this year and the question of paying tuition “is complicated” for her family, she said.

“My mother was saving up for a year in case they didn’t grant me the scholarship,” Raquel Ávila, 20, told IPS. She just began her fourth years at the Faculty of Social Studies and Labour Relations.

So far she has always qualified for a scholarship that has paid her tuition of 1,200 euros (1,626 dollars) a year.

The students start class in October but don’t find out whether or not they were granted a scholarship until December. Ávila said last year, students and professors took up a collection to pay one student’s tuition.

The sponsorship programme “is good because at least it helps people start their university studies,” she said.

But with youth unemployment standing at over 56 percent, young people in Spain need sponsors even after they graduate, just to find work.

That is the aim of the Fundació Príncep de Girona, a foundation in the northeastern region of Catalonia, which launched the “Sponsor Talent” programme, which helps students with university degrees join the labour market.