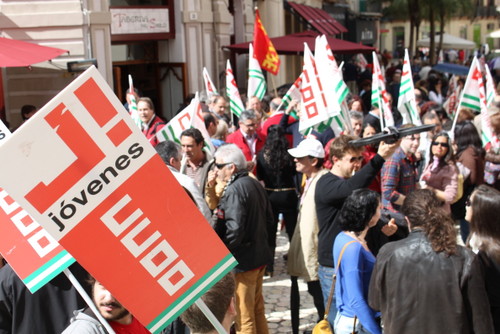 A Mar. 10 protest in Málaga, southern Spain, against unemployment and spending cuts. Courtesy of CCOO

MALAGA, Spain, Mar 13 2013 (IPS) - “They wanted to hire me, and that was something that hadn’t ever happened to me before,” says Marta Seror, a 25-year-old college graduate from Spain who is now working in an outsourcing company in Poland.

Her story is similar to those of thousands of young people who are leaving crisis-stricken Spain because of the lack of job opportunities.

“I have spent three and a half months in this country, and I am seeing more and more people like me,” she tells IPS. “I feel like I was practically forced to accept a job outside of Spain, giving up my family and friends.”

She is now earning only 600 euros a month (780 dollars), “but this is an inexpensive country,” she says.

By the end of 2012, unemployment among young people under 25 reached 55 percent, amounting to 930,200 unemployed youths, according to Spain’s national statistics institute, INE.

Overall unemployment, which stands at a record high of 26 percent, or 5.9 million people, is the highest in the European Union.

“The cutbacks in education, research and science have made it impossible to start a scientific career in Spain,” says David, a 33-year-old with a doctorate in biology.

“We’re forced to emigrate to other countries,” he writes from South Africa in the on-line campaign “No nos vamos, nos echan” (nonosvamosnosechan.net – “We’re not leaving – they’re kicking us out”) launched by the group Juventud Sin Futuro (Youth without a Future).

The organisation was created in April 2011 by the Student Movement of Madrid, one of the groups that organised the protests that began on Mar. 15, 2011 and gave rise to the 15 Marzo or 15M Movement.

The aim of the campaign is to protest the “forced exile” of young people from Spain, put a face on the statistics, and weave networks among young people at home and abroad, in order to struggle together to change things.

“I really want the situation to change, although I’m not confident that it will in the short term,” Seror comments to IPS.

Eduardo González, a 23-year-old with a degree in journalism who belongs to Juventud Sin Futuro, tells IPS that the flood of young people leaving the country is a result of the economic crisis and austerity policies in areas like education and health.

“On one hand they cut spending and on the other they use millions of euros to rescue the banks,” he complains.

In just a few weeks, the campaign has managed to gather, on an interactive global map, 6,000 brief accounts of young people living in Spain and abroad. The stories are accessed by clicking on a yellow dot.

“I’ve only found jobs as an intern since I finished my studies,” González says. But while he protests the precarious working conditions in Spain, he also notes that “the great majority” of young people who have moved abroad have not found “a job paradise” there either, only poorly paid work, and not in their professions.

José is a doctor working as a waiter and tour guide in the Dominican Republic, and Gemma is a designer working as a ski instructor in Iceland, they say on the nonosvamosnosechan.net web site.

Seror, who has a degree in physical sciences, didn’t hesitate to accept a job in the Polish city of Lodz that has nothing to do with her studies, because of the poor prospects at home and “to put an end to the routine of getting up every day in my mom’s house, sending in CVs without receiving any response, and feeling depressed,” she says.

Now she is a process executive in the Polish branch of an outsourcing company from India, she says.

According to the INE, unemployment has affected young women slightly less than young men: 53.89 percent compared to 56.24 percent.

But all of them face the same problem: the fact that they have not paid into the social security system, which means they are not eligible for unemployment benefits, unlike older jobless people.

Other challenges they share are a late start in entering the social security system and long periods earning the low wages paid to an intern or working in the black market.

Juventud Sin Futuro is organising Apr. 7 demonstrations in cities around Spain and in front of the country’s embassies abroad, to show that young people are fed up.

“It’s time for us to organise, people who have been forced to move abroad as well as those who haven’t done so,” the group says on its web site and social networking sites like Facebook.

On Mar. 7, the government of right-wing Prime Minister Mariano Rajoy announced the creation of “mini-jobs” for people under 30, which were introduced in Germany in 2003 to encourage the hiring and training of young workers part-time.

The contracts are temporary and for a maximum of 15 hours a week, with monthly salaries of around 400 euros (520 dollars).

Six out of 10 young people in Spain between the ages of 22 and 30 are in favour of mini-jobs, according to a survey carried out by the My World company, whose results were announced on Mar. 4 by the Cadena Ser radio station.

“When it’s a choice between not having anything and earning 400 euros, people accept these contracts,” says González, who has not ruled out seeking work outside Spain when his current nine-month contract as an intern ends.

Different voices have been raised against the labour reform approved by the Rajoy administration, which allows small and medium companies to lay off workers for no reason and with no severance pay during the first year of their contract. They say it opens the door to legalising precarious, temporary work.

The majority of the people who posted brief accounts on the interactive map are between the ages of 23 and 28, although “there are also some who are pushing 40, because the problem doesn’t just affect young people. Forced exile affects the entire populace,” says González.

Vicente Ortí, a 45-year-old journalist with 25 years of experience in the press and television, works in the capital of the Dominican Republic and is pessimistic about the future of young professionals in Spain.

“I left for the same reason that thousands of people are leaving – because of the lack of work: Spain, in labour terms, is in ruins,” Ortí tells IPS.