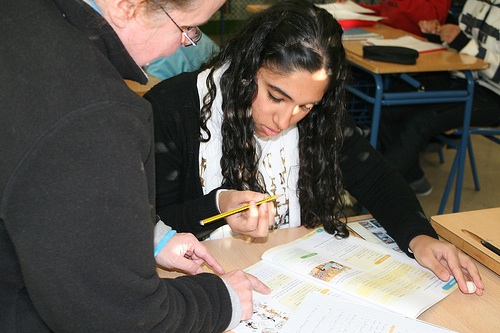 MÁLAGA, Spain , Dec 11 2012 (IPS) - Daniel introduces himself as a “gypsy and guitarist,” Francisco José wants to become a doctor, Yomara timidly says she likes to cook, and María has no idea what she wants to study.

The 12 to 17-year-old students at this school in the southern Spanish city of Málaga belong to the Roma or gypsy community, which is marked by high dropout and truancy rates.

Despite “noteworthy progress” in educational coverage among this ethnic group in the last 30 years, only 20 percent of youngsters who start secondary school – the first four years of which are compulsory, from ages 12 to 16 – go on to graduate, Humberto García, with the Gypsy Secretariat Foundation (FSG), told IPS.

And he added that not all Roma children enrol in secondary school.

The Council of Europe estimates that the Roma number 725,000 in Spain – 1.57 percent of the population of 46 million.

Although members of this ethic group can be found in every trade and profession, many work as street vendors in markets or as waste pickers of scrap metal and cardboard, which they sell for recycling.

“I didn’t go to high school and I don’t want my kids to be like me; I want them to be able to relate to others and become something in life,” 44-year-old Antonia Martín told IPS.

At her side, her husband Antonio Campos, whose parents were basket-makers and who has worked at a golf course on the Málaga coast since he was 17, says “the gypsy mentality has to change. They think they have to live like our grandparents did. But today there are more opportunities, and we can live better, with more education, and receiving more respect.

“Being a waste picker, junk collector or street vendor is not a good life – it’s feast today, famine tomorrow,” said Campos, who called for “breaking down the barriers” imposed by the traditional lifestyle of Spain’s gypsies, or calós.

Caló is the language of Spain’s gypsies, who gradually lost their Romani language. It is also another name for the Roma community in this country.

In Spain, the term gitano or gypsy is not considered derogatory, although that does not mean that this country is free of the discrimination suffered by the Roma, Europe’s largest ethnic minority.

Until the end of General Francisco Franco’s dictatorship in 1975 and the adoption of a new constitution in 1978, the Roma people did not have the same rights as the rest of the population.

But since then, school enrolment has climbed from extremely low levels to 93 percent today.

“Education and employment are two essential factors for the integration of the gypsy community,” said the FSG’s García, whose Promociona (Promote) programme works with students, families and schools to lower dropout and repetition rates.

The programme is active in 300 schools in 27 towns and cities around Spain. In Málaga the programme has a staff of four women who work with around 50 students and their families and teachers.

The four workers arrange home visits with the parents and tutoring workshops in the classroom, like the one that brings together Daniel, Yomara, María, Francisco José and other students in the Portada Alta school in Málaga every Tuesday.

“We are focused on fighting truancy and getting the families involved, because they don’t see the importance of education,” biology teacher Isabel Passas, from the Guadalmedina school, where 80 percent of the students are Roma, told IPS.

Passas lamented that a majority of the girls drop out by the age of 14, when they are married off in arranged marriages and start having children of their own.

When she was little, Martín, who comes from a family of 10 children, used to help her mother sell fruit and clothing on the streets.

Many parents depend on their children’s help in street vending, and pull them out of school early, the vice principal of the Portada Alta school, María Victoria Toscazo, told IPS.

The economic crisis that is rocking Spain has also hurt the traditional open-air markets.

According to Campos, who has relatives who work as market vendors, “people are hardly selling anything, and competition (from immigrants) is really tough.”

The study “Gypsy population, employment and social inclusion”, published this year by the FSG, reported that unemployment among the Roma in Spain grew nearly threefold between 2005 and 2011, to 36.4 percent.

“The crisis has affected everyone, but it has had a more severe impact on the most vulnerable,” said García.

Moreover, “society still has a really negative view of us, and social rejection is strong,” he added.

It is hard to encourage Roma youngsters to continue studying when they are aware that discrimination will likely make it difficult for them to find a job.

Language and literature teacher Antonio Blanco, who has spent four years teaching Roma children at the Guadalmedina school, stressed the importance of forging emotional ties and creating a pleasant environment, to keep children in school.

Nevertheless, the Roma in Spain are better off than in the rest of the European Union.

“There are problems, but not as many as in France, Romania or Portugal,” a source at the FSG told IPS.

Like the rest of the population, Spain’s Roma people are covered by the universal public healthcare system and have access to affordable housing programmes for low-income families.

Most Roma live in working-class neighbourhoods, and only a small proportion actually live in slums. But the stereotype of the wandering, thieving gypsy lingers.

The question is how far to integrate in a society that discriminates against them. Martín’s relatives say she and her family are “apayaos” (roughly meaning assimilated to the “payo” or non-gypsy culture).

Her husband argues that “gypsies should not be all bunched together, but spread around, to adapt to another way of life.”