Entrepreneurs Seek Way Out of Crisis in Spain 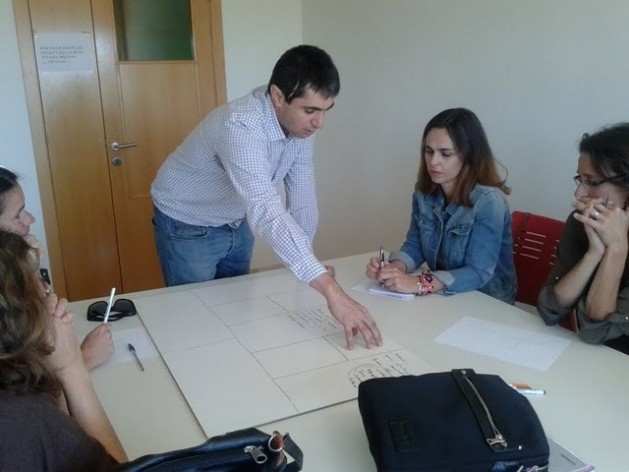 Workshops for budding entrepreneurs are mushrooming in Spain, like this one in Benalmádena, Málaga. Credit: Inés Benítez/IPS

MALAGA, Spain, Jun 18 2013 (IPS) - The people in the textile factory where Lourdes Soler presented the design of her skirts had never seen such detailed “blueprints” of a garment. Spain’s depressed labour market forced the technical architect to reinvent herself and create her own job – a growing trend in this crisis-stricken country.

“We were educated with the idea of having the same career for our entire lives, and when a crisis hits and jobs are scarce, we find ourselves paralysed and we don’t know what to do,” the 41-year-old mother of three children between the ages of seven and 11, with 15 years of professional work experience, told IPS.

María Jesús González, 38, says she doesn’t “know how to do anything else,” after 13 years in positions of responsibility in the Newco airport services and Spanair airline companies.

Laid off in 2012, shortly before she gave birth to her son, she is still waiting for her severance pay, which she hopes to use to open a café-indoor playground, with two other partners, in the southern Spanish city of Málaga.

May 2013 saw the largest month-on-month rise in the number of self-employed workers since the start of the crisis in 2009, with 12,532 newly registered that month. The number of people registered as self-employed with the social security system totalled 3,029,843 in May, according to the Ministry of Employment and Social Security.

But the number of self-employed workers has actually dropped from year to year since 2009, and in May there were 34,651 fewer than in May 2012.

“Since 2009 we have lost 200,000 self-employed workers,” María José Landaburu, secretary general of the Union of Associations of Self-Employed Workers and Entrepreneurs (UATAE), told IPS. She said “the hikes in the high season (May-September) do not compensate for the drops in the low season.”

Landaburu attributed the increase in May “mainly to the lack of alternatives for the millions of unemployed people, who see self-employment as a solution.” But it was also due to “measures adopted by the government to foment self-employment,” she added.

“This is the first time I am setting out on my own,” Giselle Rocha, a 36-year-old administrative employee from Brazil told IPS. She was left without work along with 5,000 other people when Orizonia, one of Spain’s largest tour operators, went under.

Rocha, who has lived in Spain for five years, is now getting ready to open a small business selling natural juice and vegetarian food, along with a fellow Brazilian, in this city in the southern province of Andalusía.

She complained that because of her age she is not eligible for most of the options of government support for entrepreneurs. “The aid is for the young, but it should be made available to everyone, or to no one,” said Rocha, the mother of a seven-year-old boy.

On May 24, the government approved a bill on support for entrepreneurs, aimed at facilitating the creation and financing of businesses and encouraging an entrepreneurial spirit, in educational plans in schools.

“The lack of financing is the entrepreneur’s main problem,” rightwing Prime Minister Mariano Rajoy said on Jun. 11 during a ceremony in the seat of government where he presented the bill to some 50 entrepreneurs and small businesspersons.

Rajoy urged banks to support the initiative, saying “those who grant loans must rise to this challenge.”

Spain’s unemployment rate of 27 percent is the highest in the European Union after Greece’s. And half of the 4.9 million jobless people in this country of 47 million are 25 or younger.

Landaburu said the bill “does not strongly address major needs, especially the need for credit.”

But she said it does contain “interesting measures, like ones that foment business ventures or that stipulate that a person’s home cannot be foreclosed on for private debts up to 300,000 euros (just under 400,000 dollars).”

Among the novel aspects of the new law, expected to pass this month, is a special Value Added Tax (VAT) measure that would prevent self-employed workers and small businesses from having to pay the tax until they are paid.

It also creates a special VAT for young people, which would cut costs for entrepreneurs under 30.

Sources at the Centre of Support for Business Development (CADE), a government agency, in Málaga told IPS that the main concern of entrepreneurs who visit their offices is the lack of financing.

“They run into negative answers when they ask for loans in banks, which require more and more guarantees,” said Susana Benítez, with CADE.

According to the Financial Stability Report, published May 7 by the Banco de España –Spain’s central bank – “the rates of acceptance of loan requests from non-financial companies have gone down, from levels of around 45 percent in 2006 to around 30 percent during the crisis.”

Rocha and her partner were able to set up their small business with minimal seed capital, and without having to apply for a bank loan.

But González plans to seek credit, and complains that “the banks aren’t lending.”

Entrepreneurial activity is growing above all among groups that have been hit hardest by soaring unemployment: people over 55, young people, women and immigrants, said
Landaburu.

Sales and the hotel industry are the areas most frequently chosen by entrepreneurs, although the number of self-employed people and small businesses has gone up in scientific, technical and health-related fields.

But while the number of new entrepreneurs shot up in May, “the percent that survive is much smaller than what would be desirable due to the credit shutdown, the consumption slowdown, and the lack of advice,” said the UATAE spokeswoman. She added that helping these initiatives stay above water “is our real collective challenge.”

“I am self-taught,” said Soler, who believes the biggest obstacle for entrepreneurs is often themselves. “I find my own raw materials, I make my designs, and I learn about making clothes along the way. I’m building my own future. You have to know yourself, and discover where your talents lie.”

According to the World Bank’s Doing Business 2013 report, Spain ranks 136th out of 185 countries on the “ease of doing business” index. In this country, it takes 10 steps and 28 days to set up a company, the report says.