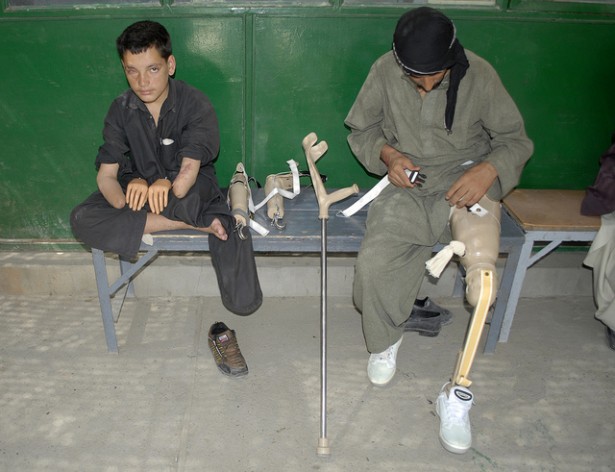 At an artificial limbs centre in Kabul. Credit: Najibullah Musafer/Killid/IPS

WASHINGTON, Feb 3 2014 (IPS) - The U.S. government is being urged to conclude a review of national policy on landmines that has dragged on for more than four years, a lag that some say has indirectly led to the injury or death of more than 16,000 people.

Rights and advocacy groups are now mounting a new campaign to urge President Barack Obama to finish the review, hold true to pledges that have been lingering for years, and formally join an international treaty to ban antipersonnel mines. In a letter sent to the president on Friday and publicly circulated on Monday, critics of U.S. policy on the issue urged the administration to sign on to the 1997 Mine Ban Treaty and to move to begin to destroy the millions of landmines that remain in the country’s stockpiles.

“It’s a real paradox. The United States has shown extremely good behaviour on this issue in recent years, yet it still reserves the right to use these weapons." -- Mica Bevington

“Your administration’s review is now into its fifth year, and it is hard to understand why the process should be delayed any further, particularly after the administration said more than one year ago that the review would conclude ‘soon’,” the letter, signed by 17 rights, watchdog and advocacy groups on behalf of several hundred civil society organisations, states.

“We have repeatedly urged the US to fulfill its long-held intention to join the Mine Ban Treaty. U.S. accession would help to convince the other countries not yet party to join, strengthening the norm against the weapon, thereby ensuring it is not used in the future and creates no additional humanitarian and socio-economic harm.”

Some 161 countries are currently party to the Mine Ban Treaty, which came into effect in 1999. Last year just a few countries are known to have used antipersonnel mines, including Syria and Myanmar, but nearly three dozen remain outside of the treaty, including China, Egypt, India, Iran, Israel, Pakistan, Russia, South Korea, Sri Lanka and others.

The United States, meanwhile, is the only member of NATO not to have signed onto the treaty, as well as the only country in the Western Hemisphere other than Cuba.

“We believe that U.S. involvement in this treaty would deter others,” Steve Goose, the executive director for Human Rights Watch (HRW)’s Arms Division and a lead signatory of the new letter to President Obama, told IPS.

“These countries wouldn’t come onboard the day after the U.S. signs, but they would be affected by the fact that the United States has aligned itself fully with this new international standard.”

The treaty, also known as the Ottawa Convention, bans the use, sale or stockpiling of landmines, while also mandating that members destroy all mines within their territories. The treaty is widely seen as having been successful in significantly bringing down the number of landmine-caused injuries and deaths, from about 25,000 per year to current levels of around 4,000 per year.

Needless to say, that number is still very high. Advocacy groups suggest that millions of landmines remain in upwards of 60 countries, some left over from as long ago as World War II, highlighting the uniquely dangerous nature of these weapons.

Broad recognition of the unacceptably long-lasting nature of anti-personnel mines led then-president Bill Clinton to decide, in 1997, that the United States would join the Mine Ban Treaty in 2006. While his successor, George W. Bush, reversed this decision, stating that the United States would never join the treaty, many had expected President Barack Obama to change course yet again when he took office in 2009.

Instead, in December 2009 the president announced that his administration would undertake a policy review. And while that review seems to have gotten off to a strong start, with administration officials reportedly talking to a broad group of stakeholders in 2010, its finalisation has since been held up repeatedly.

It is unclear what has slowed down the U.S. policy review. Some have pointed to a 2009 Pentagon statement suggesting it wanted to maintain the option of using certain mines in Afghanistan, while others say concerns over the possibility of war on the Korean peninsula could play a part.

The U.S. State Department was unable to comment for this story, though an agency official in December noted that the review was “pressing forward to conclusion”. Yet HRW’s Goose says recent weeks have seen a new flurry of action.

“This review has limped on now for almost five years, though we’ve been hearing that an announcement could now happen in coming days or weeks,” he says.

“That’s why we feel now is the time to try to push them over the hump, get the right decision made and have it announced publicly. We’ve gotten mixed signals about what the review will contain, but we’re optimistic that we’ll have a positive outcome.”

Particularly confusing for advocates is that fact that the United States has largely conformed to the Mine Ban Treaty’s mandates for decades. Indeed, since the early 1990s it has been the world’s most generous anti-mine donor.

Further, the U.S. military has reportedly not used antipersonnel mines since the Gulf War, in 1991, and has not exported any of the weapons since 1992. The country even halted all landmine manufacturing in 1997.

Nonetheless, the U.S. military continues to stockpile as many as 10 million landmines. And these, of course, remain available for future use unless new policy specifically bars doing so – or unless the government moves to destroy these caches.

“It’s a real paradox. The United States has shown extremely good behaviour on this issue in recent years, yet it still reserves the right to use these weapons,” Mica Bevington, communications director for Handicap International U.S., a charity that won the 1997 Nobel Peace Prize for its anti-mine work, told IPS.

“We feel that now is the time for the U.S. to put the other foot down and join the treaty. Doing so might encourage other countries – such as China and Russia – to join the treaty, and it would also ensure that these millions of deadly weapons are destroyed once and for all.”

Handicap International, which runs the world’s largest anti-mine operation, currently has de-mining and rehabilitation operations in 37 countries. The group says that 70 percent of the victims of landmines or unexploded ordnance are civilians, with nearly a third being children.

“With these injuries comes a community-wide sense of fear, and they require long-term support rehabilitation and attention,” Bevington says. “We need to put politics aside and remember that the victims here are people.”