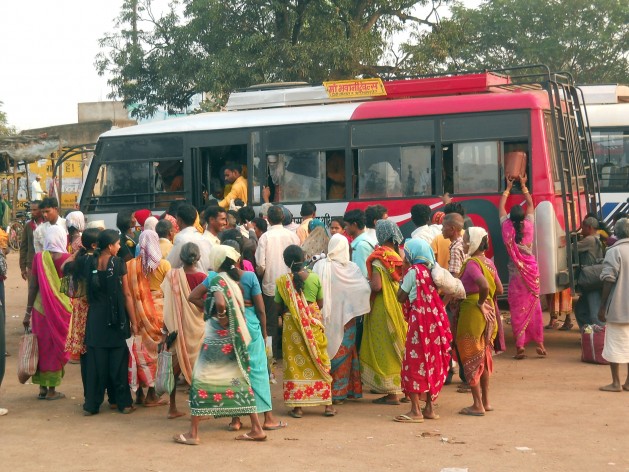 Women join the struggle to board a bus near Hyderabad in India. Travelling by public transport presents a constant danger to women. Credit: Stella Paul/IPS.

HYDERABAD, India, Feb 28 2014 (IPS) - It was 8.45 pm, and a 22-year-old woman was looking for a cab to go home after a trip to a city mall in India’s Hyderabad city. A cab arrived, and the unsuspecting computer engineer got in, little knowing she was stepping into a trap.

Within minutes the driver, accompanied by another man, locked the door and sped towards a forest on the outskirts of the city. The men tied her hands and raped her for four hours. Then they dropped her at her place and left after threatening to hurt her family if she reported the crime late last year.

“Our study shows that women do not trust the police well enough to call for help."

Nearly 25,000 rapes took place in India in 2012, according to the National Crime Records Bureau. About half of these sexual assaults took place in buses, taxis and three-wheeler autorickshaws. A month before the engineer was raped in Hyderabad, a court had sentenced four men to death for raping and murdering a 23-year-old woman in New Delhi, on Dec. 16, 2012.

A judicial committee assigned to recommend ways to curb violence against women in India suggested improvements in public transport vehicles after the Delhi incident.

Thirteen months and many more rapes later, the Indian government devised a plan in January to implement some of those recommendations. With an initial fund of 15 million dollars, the plan includes installing GPS trackers, closed circuit TV (CCTV) cameras and emergency phone call facilities in all public transport vehicles in 32 cities that have a population of one million or more.

According to the Cabinet Committee on Economic Affairs (CCEA), the government proposes to “establish a unified system at the national level and state level in 32 cities of the country with a population of one million or more, over a period of two years.” The plan has been “formulated with the purpose of improving safety and protection of women from violence by using information technology.”

The government move is seen by many as a constructive step.

“This could be the first step towards making roads more secure for women,” Kirthi Jayakumar, a Chennai-based lawyer and founder of Red Elephant, a non-profit organisation raising awareness against gender violence, tells IPS. “It will benefit women in two ways – making their spaces safer and also making more jobs available for women – as surveillance will require a workforce in its own right.”

Jayakumar suggests that the government must create a strong workforce studying video feeds from these cameras.

Defunct surveillance gadgets and poor police vigilance has always been a security concern in India – one reason why some women’s rights activists are sceptical about the road safety scheme.

Rapid population growth and expansion of cities pose a big obstacle to the success of any vigilance and surveillance mechanism, says A.L. Sharada, programme director at Population First, one of the main partners of the United Nations Population Fund in India. Unless the government regulates urban development, violence against women on roads is unlikely to come down, she says.

“Road safety is not about making a few vehicles smart,” Sharada tells IPS. “It’s about making roads safe for women to go out at any time of day or night with confidence. To do that we need better governance, better policing and also a good community-based support system for women. Without these, you can’t change the scenario.”

Sharada cites the example of Mumbai, that has seen a spate of sexual assaults against women on the road of late. “The government has installed CCTVs at most crossroads. But most of these cameras are either defunct or of poor quality. Also, the police patrolling is so inadequate that women are molested and attacked even in broad daylight. Where is the mechanism to ensure that the gadgets are in working condition?”

Some also point to a “gaping hole” in the road safety plan such as the exclusion of trains, used by millions of women every month. There are widespread reports of women being molested, raped and even murdered on trains.

A recent victim was a 23-year-old engineer from Machlipatnam, a city 340 km from Hyderabad. On Jan. 16 her body was found by a road outside Mumbai where she worked for a leading software firm. She had reportedly boarded a train from Hyderabad to Mumbai 12 days earlier.

“Whether in city trains or metros, there are so many instances of horrific violence against women,” says Sandhya Pushppandit, a documentary filmmaker and activist at Akshara, a Mumbai-based NGO. In 2008, Akshara had co-launched India’s first emergency helpline for victims of gender violence aiming to provide an ambulance within 10 minutes of a call.

“But our trains have no helplines and emergency call buttons. One can pull a chain and bring the train to a halt, but this in itself doesn’t guarantee either the victim’s safety or the arrest of the criminal. Besides, in a small public transport vehicle like the auto-rickshaw, the emergency call button might well be deactivated by the rapist,” Pushppandit tells IPS.

One solution, says Anu Maheshwari of Young Leaders Think Tank, a New Delhi-based youth policy research group, is to address the factors that trigger fear among women on the move.

Maheshwari shares some insights from a recent survey that the think tank undertook in 18 Indian states: “From the data we collected, 90 percent of sexual assaults on public transport happen in poorly lit areas. In most cases, the driver of the public transport vehicle violates traffic rules such as jumping the signal or allowing more passengers than the law permits.

“Our study shows that women do not trust the police well enough to call for help. So improving road infrastructure, strict implementation of traffic laws, trust building and sensitisation of the police force have to be an integral part of any road safety scheme.”

But, says Sharada, while laws can only lay down rules, they can’t change mindsets. “To achieve the latter should be a matter of immediate concern for our thinkers.”