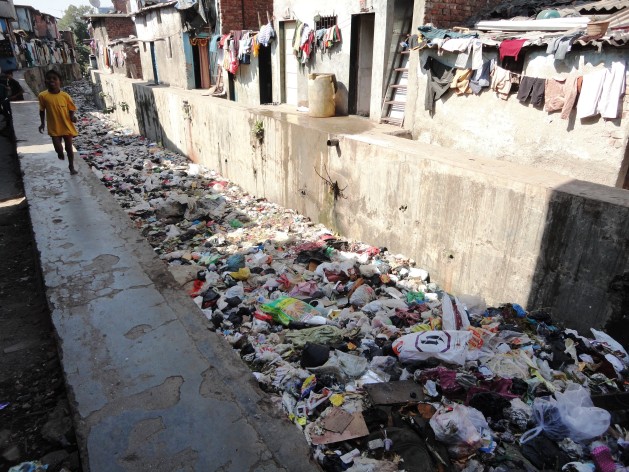 MUMBAI, Dec 10 2013 (IPS) - In a shanty tucked inside Dharavi, described as Asia’s largest slum settlement, a little piece of theatre unfolds. Several young boys are heckled as they pretend to go vegetable shopping – and calling them names are young girls. The boys are embarrassed.

While the exact opposite happens on Indian streets, the roles have been reversed in the play.

And it has made boys like 16-year-old Salman Shaikh, one of the participants, realise that sexual harassment is not “a harmless bit of fun” when you’re at the receiving end.

Since the brutal gang rape and death of a young woman on a bus in Delhi last December, NGOs in India have been reorienting adolescent sexuality programmes to sensitise boys on gender issues.

Laws alone are not enough in a country where male preference and discriminatory attitudes towards women persist, say experts.

“Laws become effective only where there is a change in social norms,” says Dr. Rema Nanda, founder of the NGO Jagriti Youth, which runs youth leadership programmes in the states of Bihar, Uttar Pradesh and Rajasthan, three of the country’s largest and most populous states. “They help, but for change to be pervasive it has to come from the community.”

The play in Dharavi, located in India’s financial capital Mumbai, is an attempt to bring about this change.

Those participating are enrolled in an initiative called Adolescents Gaining Ground, launched last year by the Society for Nutrition, Education and Health Action (SNEHA). The approach is to use a mix of community meetings and role-playing to reach out to boys and girls.

“When we launched the programme, our focus was on girls,” says Garima Deveshwar Bahl, programme director with SNEHA. “We would talk about menstrual hygiene and nutrition. But the girls would bring up issues like sexual harassment or brothers not pitching in with domestic chores.

A 2012 Unicef report, ‘Progress for Children: A Report Card for Adolescents’, says the country is home to 243 million adolescents, the highest in the world. The report also highlights that there is a critical need to invest in this group.

In India, though, most programmes are focused on issues like early marriage and early pregnancy, and largely involve adolescent girls.

Experts are now calling for large-scale interventions among boys – a demographic that has come into prominence after the Delhi bus incident and the rape of a Mumbai photojournalist in August this year. In both instances, the accused are between 16 and 25 years and were residents of slums.

It is in shanties like Dharavi that SNEHA runs its initiative. The facilitators and counselors are drawn from the local community to help create greater trust. To begin with, boys and girls are placed in separate groups to help them open up easily.

“Reaching out to boys is especially challenging as they are less willing to talk about their personal lives,” says Sanjeevani Vaithi, a facilitator with SNEHA. A resident of Dharavi, she was trained for a year before she started counseling.

“Girls face greater restrictions and they are happy for any opportunity to interact in safe spaces. Boys enjoy greater freedom in comparison. It becomes harder to pin them down. It takes time but they eventually listen,” she tells IPS.

The results are already visible.

“Now I don’t tease girls,” says Haseem Khan, 16, who joined the programme early this year. “And if I see someone doing that I speak up.”

The sensitisation goes beyond the streets.

Khan’s 18-year-old neighbour Saddam Hussain says, “I would never help my mother earlier. Now I see how hard she works and I help her out.”

An impact report done by SNEHA, six months after their programme started, is encouraging. Over 70 percent of boys and girls agreed that both genders are entitled to equal freedom; an improvement of over 20 percent.

When it comes to educating girls and sexual harassment, however, the change is not as significant.

Experts believe this highlights the need to focus on the concept of gender respect in a strong way at the school level. “They don’t have access to this education in their schools and this is the gap we are plugging. But it needs to be done very early,” says Bahl.

“We have to work on normalising female-male interactions in a public domain,” adds Dr Nanda of Jagriti Youth.

“Girls and boys may go to school together, but they don’t talk to each other. The more we segregate them, the more we reinforce stereotypes that women should not be seen, or need to be protected. You cannot on the one hand say women have to participate in the economy and then keep them apart.”

What is encouraging is the shift in the attitudes of stakeholders who are in a position to enable social change.

The tremendous public outrage after the Delhi incident and continued media focus on sexual assaults forced the Indian government to introduce a tougher anti-rape law earlier this year. The Criminal Law (Amendment) Act 2013 provides for a life term and even the death sentence for rape convicts, besides stringent punishment for offences like acid attacks, stalking and voyeurism.

“After the Delhi incident and the regular reporting of sexual assaults, we are definitely beginning to see a much improved response from various groups, especially in the government, when it comes to gender issues, which was not the case earlier,” says Bahl.