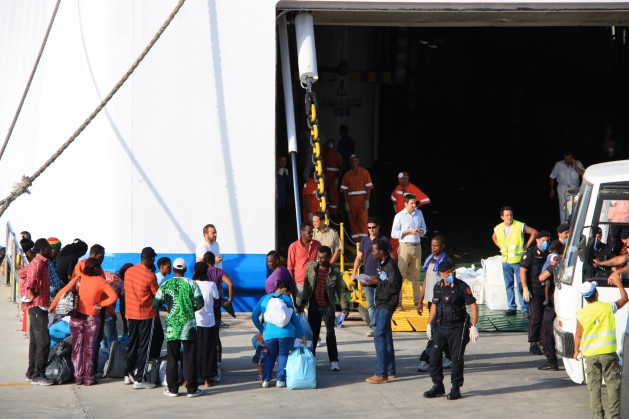 Migrants being transferred from the Lampedusa centre. Credit: Caritas Italiana.

ROME, Mar 11 2014 (IPS) - “We walk inside an area that is 128 steps long and seven-and-a-half steps wide. This is the path they made for us: two metres of bars over our heads, and upon the bars, two metres of plexiglas. We are like canaries in a cage, like birds of different races all in one cage.”

Ahmed (name changed) is from Africa but he has been living in Italy for 22 years now. On Dec. 20 the police stopped him and asked for his documents. Ahmed does not have them, and so has been kept in the Ponte Galeria Centre for Identification and Expulsion (CIE) of Rome since then. “It’s been two months now, but it feels like two centuries,” he told IPS on phone from the centre.

"You are lucky if you get out of here with 100 grams of your brain left.” -- Ahmed, a migrant from Africa

Last month, the Caritas Italiana and Migrantes Foundation published their annual dossier on migration, which states that “the true reform of the repatriation system would be the closure of the centres.” Oliviero Forti, director of immigration issues at Caritas explained to IPS the reasons behind such a strong recommendation.

“Helped by Prof. Roberto Cherchi, constitutional lawyer, we came to the conclusion that there is a problem of constitutional legitimacy connected to those places. Precisely for the way they are conceived, built and managed, it is easy to slip into gross violation of human rights.”

The CIE are centres for migrants who have no resident permits or identity documents, and for those who have received a deportation order. Yet, as the Caritas and Migrantes dossier reports, the available places are far fewer than the number of migrants in such a state.

As a consequence, placement is decided on a case-by-case basis, following such informal criteria as whether the person is considered a danger to society and whether the chances of identifying and deporting the person are high. This brings disparity in treatment often based on nationality.

Khalid Chaouki, Italian MP from the Democratic Party, visited the Ponte Galeria CIE following a protest by some inmates who literally sewed their mouths shut in January to draw attention to the conditions at the Rome centre. “The situation there was even worse than in Lampedusa, because it is in fact a prison outside the law, where people who often haven’t committed any crime are detained for months,” he told IPS.

Migrants who should be in other centres are often kept in the CIE. “Unfortunately we often found women victims of trafficking, minors, stateless people and also EU citizens, Romanians for instance,” Gabriella Guido, spokesperson for LasciateCIEntrare (Let Us In) told IPS. LasciateCIEntrare is a campaign that began in 2011 after then Italian minister of the interior banned media access to the centres.

That was the year that the maximum holding period was extended from six to 18 months. “Often the problem with the identification is that the foreign consulates are not very cooperative, but if a migrant is not recognised in the first 30 to 60 days, it is not going to happen in 18 months either. The extension of the permanence only increased the stress, the riots and the episodes of self-harm inside the CIE.”

“Nobody sleeps here,” Ahmed said, “apart from the ones who take sleeping pills. Many withdraw into themselves. There is a guy who doesn’t speak any more, and one who talks to himself. You are lucky if you get out of here with 100 grams of your brain left.”

Media access to the CIE now depends on permission from the prefect. Forti says the reception system needs deeper reform. “Regularisation of migrants, fair salaries, legal protection of foreign citizens, all of this means granting a correct culture of work in Italy, both for migrants and for Italian citizens.”

But there is political opposition to this idea. Nicola Molteni, Italian MP for the Northern League told IPS that Italy has been a victim of the “indulgent political behaviour of the last two governments” and that it has been abandoned by the European Union.

“We have 3.2 million unemployed, one million of unemployed youth, and we must give a job to our people first. With these numbers we don’t even need regular migration, not to mention the illegal one, which often leads migrants into the hands of organised crime.”

Molteni and his party defend the CIE. “They have a functionality and necessity which is fundamental,” he said. He says the problem is “the complete lack of a push-back policy, of a control of the borders and of international cooperation with the North African countries to prevent migration.”

At the other end of the political spectrum, Chaouki says the CIE centres are an ideological flag of the Northern League, that have solved no problems. “We need to develop alternatives to those centres, we need to open new regular channels of access to Italy, new procedures of reception and also of deportation that are not harmful to people,” he told IPS.

According to the Caritas dossier, of the 35,872 expulsion proceedings in 2012, 18,592 resulted in actual expulsions. In all 7,944 foreign citizens passed through the CIE, of which only half were eventually deported.

“Despite the huge amount of money spent to maintain these places, they don’t even serve the purpose they were created for. Our conclusion is that their function is rather to placate the anxiety of those who perceive migrants as a threat to security,” said Forti.

Ahmed’s voice becomes harsh over the phone: “We are losing our minds here. If an average Italian could see us now, he would think that is better to keep us locked inside. But they do nothing, because they see nothing.”