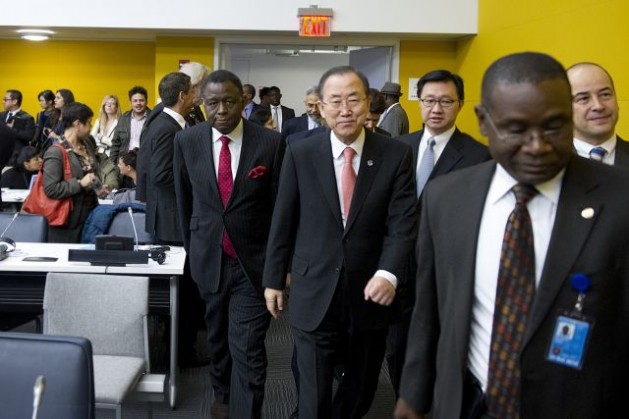 Secretary-General Ban Ki-moon (centre) arrives with Babatunde Osotimehin (left), Executive Director of the UN Population Fund (UNFPA), for the opening of the 46th session of the Commission on Population and Development, Apr. 22-26, 2013. Credit: UN Photo/Eskinder Debebe

UNITED NATIONS, Mar 12 2014 (IPS) - When the United Nations hosts one of its mega conferences – whether on population, human rights, food security or sustainable development – there is always a demand for full and active participation of often-marginalised groups, including women, civil society, indigenous peoples and youth.

But some of the world’s parliamentarians – who help implement most of the U.N.’s programmes of action through national legislation – are also battling to find their rightful place at international conferences.

This is not a shortcoming of the United Nations, say legislators, but the fault of governments that refuse to acknowledge the importance of parliamentarians in official delegations.

“They can see first-hand the benefit of rights-based, evidence-based policies in improving the life of their constituents,” he said.

And they bring this relevance and commitment to their nations’ delegations, he said.

The Programme of Action (PoA) adopted at the landmark 1994 International Conference on Population and Development (ICPD) – which will be discussed at the CPD Apr. 7-11 – stressed the importance of parliamentarians, civil society and youth being involved in official delegations to the United Nations.

Confirming this, Purnima Mane, president and chief executive officer of Pathfinder International, told IPS “it is incredibly important we involve parliamentarians in development work, empowering them to appreciate and raise issues of population and development with their constituents, and gaining their support to champion global development in national policies, programmes, and budgets.”

In many countries, she pointed out, parliamentarians are already engaged in the process of monitoring their national progress on the ICPD PoA, and building political will and an enabling policy environment, and garnering needed resources for doing so.

Their example needs to be followed more vigorously around the world and inclusion of parliamentarians in national delegations is one way of recognising their role, said Mane, a former U.N. assistant secretary-general and deputy executive director of the U.N. Population Fund (UNFPA).

Hyde told IPS over a third of the Asia-Pacific nations included members of parliaments (MPs) in their delegations to the sixth Asia and Pacific Population Conference held in the Thai capital of Bangkok last year.

The Pacific nations demonstrated the value of well-prepared, engaged MPs, with Cook Islands delegate leader, health minister and AFPPD member Nandi Glassie presenting the majority outcome position on behalf of all the Pacific and a solid majority of Asian nations.

While many nations will not reveal their full delegation until just before April, many parliamentarians who contributed to APPC should be in their nations’ delegations at the CPD in New York, “hopefully with other parliamentarians embedded in delegations from the other regions of the world”, he added.

Hyde said parliamentarians from across Asia and the Pacific gathered in Chiang Mai, Thailand last month to help craft the official oral statement on priority issues that AFPPD will present during the CPD in New York.

Asked whether the CPD will also focus on the successes and failures of ICPD, Mane told IPS, “While it is difficult to predict what particular issues will see the most attention at the Commission this year, we hope for a continued focus on human rights and individual dignity, the realisation of which is a driver for all areas of development.”

“At Pathfinder, we were encouraged by, and applaud, the focus on young people and women’s empowerment found in UNFPA’s most recent review, ‘ICPD Beyond 2014 Global Report’,” she added.

Mane said she is also encouraged to see the reference to sustainability.

Without the engagement of all, including women and young people, as well as realisation of their sexual and reproductive health and rights, sustainable development will be hard to achieve in its truest sense, she said.

The upcoming session will likely touch on the successes and failures of the achievements of the ICPD agenda in the context of identifying key lessons learned “that will carry us forward for greater success in the coming decades.”

These will clearly differ by countries but the major focus needs to be on what is going to be done going forward to accelerate the momentum towards progress, Mane said.

Given that the upcoming session will certainly be shaped by the context of this year and the international focus on the Millennium Development Goals (MDGs) and what comes next, “I believe it is crucial the right to sexual and reproductive health for all people shines through as we discuss the path forward and the post-2015 global development agenda.”

She said progress has certainly been made and momentum is growing through ‘Every Woman Every Child’ and many other efforts by several bilateral partners like the U.S. Agency for International Development (USAID), national governments, philanthropic foundations, civil society and the private sector.

She said they are all working better through joint platforms, but many countries are still very much behind on equitable progress toward the MDG5 targets relating to the improvement of maternal health.