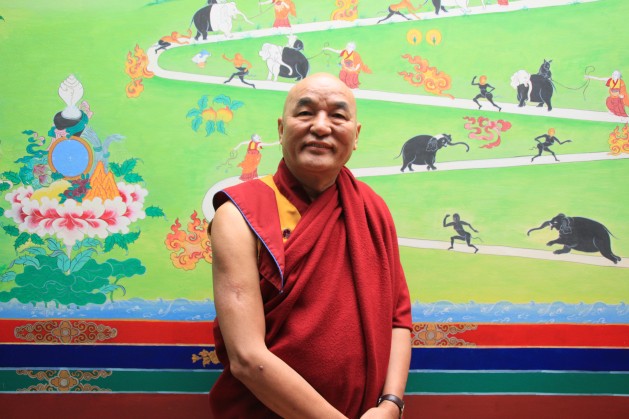 The Buddhist monk Thubten Wangchen has sparked a confrontation between Spain and China over human rights in Tibet. Credit: Saransh Sehgal/IPS.

Thubten filed a case of genocide against former Chinese president Jiang Zemin and former prime minister Li Peng and three other top officials over allegations that they committed genocide in Tibet.

“Behind the motivation to pursue this case is only one agenda - that the world should know the reality of Tibetan suffering under the Chinese regime." -- Thubten Wangchen, a Tibetan Buddhist monk

The lawsuit seeks to indict Chinese leaders of having information on torture, executions and “forced family planning policies that included widespread abortion and forced sterilisations” against Tibetans. The judge ordered Interpol to issue an arrest order seeking capture and imprisonment of Chinese leaders for genocide, torture and crimes against humanity.

The Chinese government has protested against Spain’s involvement in what it called domestic issues. Soon after the judgment, China’s Foreign Ministry reminded Spain that fiscal repayments on loans from China might be approaching.

“Whether or not this issue can be appropriately dealt with is related to the healthy development of ties. We hope the Spanish government can distinguish right from wrong,” Chinese Foreign Ministry spokeswoman Hua Chunying said after the ruling.

China holds a major stake of Spanish debt, and following the order, the Spanish parliament approved a ruling party proposal limiting the global reach of its courts to pursue cases of genocide and other crimes against humanity committed overseas.

The legal reform to limit the universal jurisdiction was voted in by both chambers of the parliament and entered into force Mar. 15.

Opposition parties are now accusing China of exerting pressure on Spain to overlook its commitments on human rights.

Thubten told IPS that the government’s reform move “is sad news not only for Tibetan people, but also for the people of Spain. The PP is bowing to Chinese pressure because of economy and debt.”

If this continues, he said, “15 years from now the Spanish people will ask the Chinese for jobs and welfare.”

Several human rights groups, including Amnesty International and Human Rights Watch have signed an open letter calling the reform in law a “devastating blow for universal jurisdiction and for Spain’s international obligations to ensure that grave crimes don’t go unpunished.”

Thubten and his supporters were using a Spanish law dating back to 1985 that allows suspects to be tried for human rights cruelties committed abroad when a Spanish person is subjected to them. Spanish judges have invoked the doctrine of universal jurisdiction to inspect human rights exploitations overseas, especially in Latin American countries.

The law was used to arrest of Chilean dictator Augusto Pinochet in London in 1998 on the orders of Spanish judge Baltasar Garzón. Spanish courts also tried to prosecute al-Qaeda leader Osama bin Laden and many others. But in practice, very few cases have been brought to trial.

Thubten, who was born in Tibet in 1954, fled into exile with his family to Nepal in 1959, the same year when Tibet’s spiritual leader the Dalai Lama escaped to India. He brought the case in a Spanish court in 2006 along with the Spanish NGOs Comité de Apoyo al Tibet and Casa del Tíbet.

“Behind the motivation to pursue this case is only one agenda – that the world should know the reality of Tibetan suffering under the Chinese regime,” Thubten said.

The death toll from self-immolations in protest against Beijing’s hardline policies in Tibet has reached 127, he said. “With massive Chinese military presence inside Tibet controlling the people, Tibetans are living under constant repression with no freedom of religion or movement.”

Thubten is calling for a more unified European policy on human rights towards China. “We urge the EU [European Union] to play a major role by appointing an EU special coordinator on Tibet.”

Thubten added: “From my small action, I’m giving moral support to my Tibetans who live inside Tibet.”