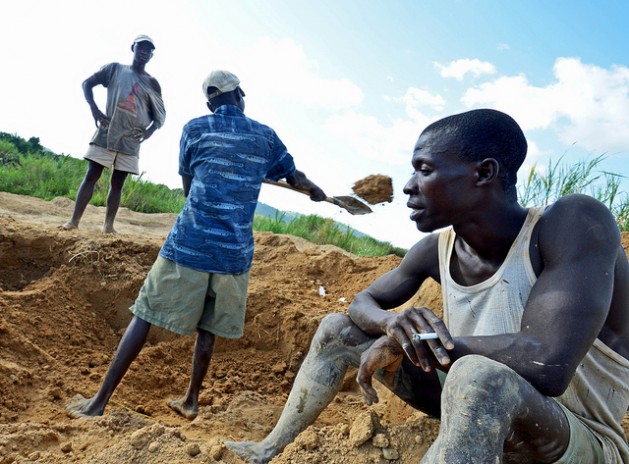 WASHINGTON, Mar 24 2014 (IPS) - An unusual combination of industry, government, investors and civil society here is celebrating the United States’ initial acceptance into a prominent global initiative aimed at strengthening transparency and accountability in the extractives industry.

Last week, the Extractives Industry Transparency Initiative (EITI) board accepted the U.S. application to become a candidate country in the grouping. The United States thus became the first Group of Eight (G8) wealthy nation to formally become part of EITI, and joins around 41 other countries that have already done so.

“We’re at the end of the era of easy access to resources, where operators have to go further afield and at greater risk." -- Paul Bugala

EITI, based for the past decade in Oslo, promotes a set of global standards for the oil, gas and mining sector that works to reduce corruption and promote good governance. Proponents say the United States’ participation underlines a strengthening global trend towards transparency, particularly in the extractives sector.

“This is just another part of the wave of transparency – recognition that this information is important not only to investors but also to countries in which industry operates and to the communities that share their environment with mines and drilling,” Paul Bugala, a member of the panel that drew up the U.S. EITI application and an analyst at Calvert Investments, a socially responsible firm, told IPS.

“We’re at the end of the era of easy access to resources, where operators have to go further afield and at greater risk. If investors don’t have project-level payment information, we’re flying blind in many ways.”

The EITI process offers equal voice to government, industry and civil society representatives, and the United States’ application was jointly fashioned – and approved – by broad representation from each of these sectors.

“The oil and gas industry has worked with civil society groups and governments for over a decade through EITI to promote payment transparency in various countries,” Stephen Comstock, an official with the American Petroleum Institute (API), a central industry lobby group, told a trade journal last week.

“Expanding this effort to the United States will hopefully provide U.S. citizens with a new perspective of the significant revenue and economic impact generated from U.S. exploration and production.”

At its base, the EITI standard mandates that governments and companies provide regular disclosure of royalties and revenues from natural resource extraction. The idea is that these parallel reports will allow for easy understanding of money local communities may be owed – and where any discrepancies may be coming from.

The U.S. application will go beyond the standard, to include renewable energy sources and additional minerals. In 2013, the U.S. federal government collected some 14 billion dollars from companies involved in natural resource extraction, typically the country’s second largest source of revenue.

Yet critics say domestic accountability mechanisms are too opaque.

“The kind of information that’s available for the public is aggregated, searchable only by year and state and some commodities,” Mia Steinle, the U.S. EITI civil society coordinator and an investigator at the Project on Government Oversight (POGO), a watchdog group here, told IPS.

“Coal mining communities, for instance, can’t really tell whether they’re getting the money due to them by the federal government. If industry wanted to work in a community that had project-level information, however, its members could make a decision based on whether a previous project had been worthwhile or not.”

Empowering the public with such data is, of course, of particular importance in developing countries, where extractives contracts have often been struck between powerful companies and governments that can be oblivious to local benefit. EITI currently lists 26 countries as compliant with its standards, and another 18 countries as candidates.

The initiative is being bolstered by landmark though pending legislation in the United States and the European Union. Due the E.U. moves, Tullow Oil, a British company, on Tuesday became the first drilling company to offer project-level payments reporting in every country in which it’s operating.

“Tullow’s move shows that global oil companies can disclose such information at little cost and without fear of competitive harm,” Ian Gary, a senior policy manager at Oxfam America, an anti-poverty campaigner, said Tuesday. “The disclosures … show that some oil and mining companies are embracing – rather than fighting – the global transparency tide.”

Yet even as the E.U. moves towards implementation of its new transparency requirements, known as the Accounting Directive, by next year, a similar proposal in the United States remains stuck in litigation. The provision, known as Section 1504, became law back in 2010, but its implementation has since been held up by regulators and industry pressure.

Last year, a proposed Section 1504 rule, which would require disclosure of all payments made by U.S.-listed extractives companies to foreign governments, was struck down in the courts. Campaigners are now pointing to the United States’ EITI candidacy as added impetus for the main regulator, the Securities and Exchange Commission (SEC), to speed up its work rewriting the rule.

“The new EITI standard … calls for fully public reporting, by company and by project. This is what the SEC proposed in its 2012 rule,” Jana Morgan, coordinator of Publish What You Pay USA, a pro-transparency group, told IPS.

“The EITI board’s decision puts additional pressure on the SEC to prioritise scheduling a rulemaking for Section 1504. U.S. government support for the Section 1504 rule released in 2012, coupled with its advocacy for U.S. candidacy in the EITI, makes clear that the [Obama] administration views these initiatives as complementary.”

Interestingly, the legal challenge to Section 1504 was spearheaded by the American Petroleum Institute, the group that helped fashion the U.S. EITI application and which has welcomed the country’s new candidature. POGO’s Steinle says that, given the recent court decision, EITI-related project-level reporting for the United States remains unresolved and will be discussed this year.

Nonetheless, she stresses that the EITI discussions between civil society, industry and government representatives were surprisingly fruitful.

“It’s so useful and powerful for those three sectors to be face to face for these types of discussions. We’ve broken down a lot of walls, simply having people get together who would normally never talk to one another,” she says.

“As other countries are committing to EITI or similar initiatives, it’s very important that the United States is now following these good international examples. Hopefully this will help to set an example for those countries that aren’t yet on board.”

The United States will now have three years to bring its reporting into alignment with the EITI standard. U.S. officials say they plan to file their first report in 2015.