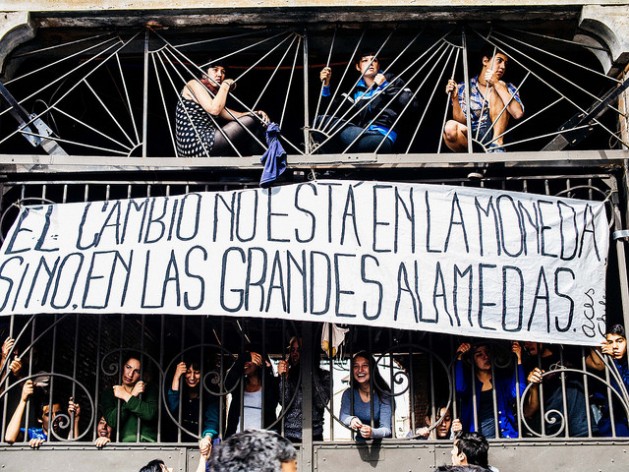 One of the aims of the tax reform is to finance an overhaul of Chile’s education system, the chief demand of mass street demonstrations. Credit: Claudio Esparza/IPS

SANTIAGO, Apr 24 2014 (IPS) - Chilean President Michelle Bachelet’s proposed tax reform is seen as the cornerstone of her ambitious social programme and a sign of a new shift in fiscal policy towards redistribution of income.

But it has critics on the right, who say it goes too far, and on the left, who say it leaves legal loopholes and regressive taxes intact.

The bill, expected to pass easily through Congress, where the governing centre-left coalition has a majority, would boost tax revenue by 8.2 billion dollars a year.

The new revenue will go towards financing an overhaul of the education system, to guarantee universal tuition-free public education at all levels, improvements to healthcare and other social coverage, and paying off the deficit inherited from the previous administration.

That total is equivalent to three percentage points of GDP in this country of 17 million, where the economy grew 4.1 percent in 2013, down from an average of 5.8 percent over the previous three years. Taxes account for 80 percent of state revenue in Chile.

Socialist President Bachelet, who was sworn in on Mar. 11 for her second term – she previously governed from 2006 to 2010 – says the reform will enable Chile to become a “cohesive, democratic and just society,” because it will help the country “to move forward in equality, improving income distribution” under the premise that those who earn more, pay more.

For economist Gonzalo Durán of the Fundación Sol, a labour think tank, “this is the first time in 30 years that the tax system’s philosophy is undergoing a change in Chile; in the past, the implicit view was that taxes were stolen by the state from those who had the most.”

Durán told IPS that the reform “explicitly proposes that the role of taxes is to redistribute income”.

Under the reform, 2.5 percentage points of GDP will come from modifications of the tax structure, especially as a result of the elimination of the Fondo de Utilidades Tributarias (FUT), a corporate tax break created in 1984 by the dictatorship of late General Augusto Pinochet (1973-1990).

The remaining half a percentage point will come from measures against tax evasion, estimated at 46 percent in income tax alone. The reform will also eliminate different legal loopholes used to reduce payment of taxes.

The FUT is a widely criticised loophole that enables companies to defer income tax payments on profits that are reinvested, with the stated aim of promoting corporate savings and reinvestment.

But “the mechanism is a major source of tax evasion,” Durán said.

In the last 30 years, nearly 270 billion dollars in potential taxes were lost to the state coffers as a result of the FUT, he said.

The FUT will be eliminated in 2018, when businesspersons and shareholders start to pay taxes on all earnings, whether or not they are withdrawn.

“The tax base will be changed from profits withdrawn to profits earned,” Durán said.

The bill is an essential part of Bachelet’s government programme, which she unveiled on Mar. 31. It includes more than 30 changes to the current tax system. Among the most significant is the gradual increase in the corporate tax rate from 20 to 25 percent.

But it also has significant gaps, the economist said.

For example, it won’t do away with another mechanism, the “integrated tax”, which basically means the tax paid by companies is discounted from what the owners would have to pay when they earn profits.

Nor will the bill modify the taxes paid by mining companies, which will continue to pay the current royalties, based on earnings rather than sales.

Furthermore, the bill does not introduce changes in the value added tax (VAT) – the biggest source of tax revenue in Chile, accounting for 48.6 percent of fiscal revenue, followed by income tax, which represents 39.5 percent.

The tax on consumption taxes everyone at the same rate and gives commercial activity the same treatment as basic services and rights like education and healthcare.

The reform has its critics – mainly from the right.

The loudest opposition has come from the extreme-right Independent Democratic Union opposition party, whose offensive has included a fear-mongering pamphlet with warnings about the bill’s supposed negative effects on the middle class.

The Instituto Libertad (Freedom Institute), with ties to the right-wing National Renewal Party, launched a campaign against the tax reform, criticising, among other things, the increase in VAT on alcohol, soft drinks, and new homes.

María Teresa Arellano, a 37-year-old secretary, believes the reform will hurt her. “My only pleasure is drinking a cup of wine on the weekend, and now I’ll have to pay more for that,” she told IPS.

But Ana María Pineida, 57, said the reform is focused on a higher good: “I know my grandson will have free education thanks to the changes.”

For years, students have been holding street protests demanding tuition-free higher education, which is available in most of Latin America but not in Chile.

Independent lawmaker Giorgio Jackson, one of the members of Congress representing students, argued that people need to understand the essence of the reform, which in his view “is designed to correct longstanding problems.”

“The aim is to overcome the barrier of a state with little capacity to raise the funds needed to offer guaranteed, high-quality social coverage,” he told IPS.

Durán said the changes will benefit Chileans by providing tuition-free quality education, since two of the three percentage points of GDP that should be brought in will go exclusively towards that goal.

After that, progress can be made towards better distribution of income, he said.

A study co-authored by Michel Jorratt, an adviser to Bachelet on tax issues, says the wealthiest one percent of the population has 15 to 33 percent of all income, but pays tax rates of only nine to 17 percent.

The benefits of tuition-free education will be seen in the long-term, but “taking 8.2 billion dollars from the richest people in the country, for the state, is an important contribution towards redistribution,” Durán said.

Political scientist Francisca Quiroga said the fears being spread by the right are unfounded. “This is not a radical overhaul of the tax system, it’s not revolutionary. It will be applied gradually,” she told IPS.

Latin America has regressive tax systems, “and several international institutions have stated that one of the challenges facing the region is to introduce tax reforms” to make the systems more fair, she said.

“This is a reform that Chile needs, and that continues to maintain beneficial conditions for business, such as the integrated system,” she said.

To head off criticism, Bachelet has sent her ministers around the country to explain the reform and outline its social benefits.