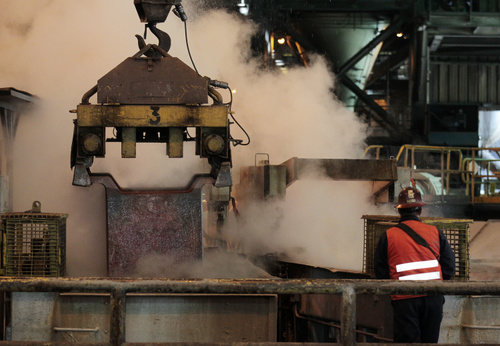 Smelter at the El Teniente mine, which produces 37 percent of Chile’s copper. Credit:Marianela Jarroud/IPS

SANTIAGO, May 22 2013 (IPS) - Chile’s position as the world’s top producer of copper is not under threat, but the country faces the challenge of transforming its copper mining industry into social capital for the long term, and addressing high energy costs, which have grown seven-fold over the last decade, experts told IPS.

“The country’s comparative advantages, in contrast to its production indicators, are somewhat threatened by the upsurge in prices, especially for electricity and supplies,” said Rodrigo Balbontín, an analyst at the Centro de Estudios del Cobre y la Minería (CESCO – Centre for Copper and Mining Studies).

With 36 percent of the global market and 28 percent of known copper reserves, Chile remains in the lead as the world’s top producer of copper, which was nationalised in 1971 by then socialist president Salvador Allende (1970-1973). Copper accounts for 45 percent of the country’s exports and provides one-third of government revenue.

In 2012 the country produced 5.5 million tonnes of copper, three percent more than in the previous year, according to the Chilean Copper Commission (COCHILCO).

Bernardo Reyes, head of the mining engineering department at the University of Santiago, told IPS that Chile’s copper reserves “guarantee about 80 more years of production, but the deposits are being exhausted, and if CODELCO does not make the necessary investments, production will decline, which is its prime concern.”

Accordingly, CODELCO plans to inject 27 billion dollars in the period 2013-2020, mainly to increase production and improve copper grades, the measure of the metal’s purity. In the immediate term, it plans to increase extraction to 6.3 million tonnes in 2015.

North of the Chilean border, the world’s second producer, Peru, is planning to double its 2012 production by 2016. Output in 2012 was 141 percent higher than in 2011, reaching three million tonnes. From 2016 to 2021 Peru forecasts stable copper production at six million tonnes a year.

Balbontín said the other big copper producers, particularly Peru and China, will gradually approach Chile’s production figures “because they have more potential for growth,” but Chile’s supremacy is not at risk.

He added that Peru, rather than a threat, represents “the possibility of a strategic alliance, in which there could be an exchange of knowledge, experience and professionals.”

The United States, the other large producer in the Americas, is not a threat either, Balbontín said. “Not only in the case of copper, but in that of other materials, the United States produces for its own internal consumption,” he said.

In the experts’ view, another baseless threat to which frequent reference is made, with ulterior motives, is the alleged high cost of labour in Chile.

Reyes said that mining workers’ wages are lower in Chile than in the United States, and he dismissed the idea that they might eventually be a hindrance to investment.

Cristián Cuevas, the president of the Confederation of Subcontracted CODELCO Workers, said this was a “fictitious debate” and “unacceptable blackmail” on the part of investors in the sector.

“To think that mining industry workers are a privileged elite is to not understand anything. I would like to send the investors to experience for themselves the reality of more than 70 percent of the workers I represent, their working conditions, their living conditions, and the impact the industry has on mining towns,” he said.

The experts agreed that the chief real challenge, in contrast, is high infrastructure and energy costs, which make production more expensive, largely because of difficulties in securing access to water.

“The cost of energy in Chile has risen approximately seven-fold in 10 years, and that has a big effect on production costs,” said Reyes.

Reyes added that water shortage in Chile’s northern desert, where the principal copper deposits are located, has forced mining companies to get their water supply from the sea.

Water from the ocean must be desalinated and transported to 800 metres above sea level. “Pumping water up into the Andes requires a great deal of infrastructure as well as energy resources,” he said.

CESCO’s Balbontín said the issue of electricity supply is related to the geographical features of the location of the copper deposits, the concentration of the energy market, and an energy mix that, in the case of the Great North Interconnected System, is based on coal and diesel fuel.

He emphasised that another very important issue to analyse is “converting the exploitation of a natural resource into long-term social capital, because copper is non-renewable, we all know that.” Copper profits should be used to build up complementary productive industries so that “we are not just left with the revenue and jobs provided by the copper industry,” he added.

However, he forecast an increase in copper production and consumption worldwide over the next decade, and stable prices that will not drop below the level of two dollars a pound, as they did in the mid-1990s.

“While copper prices have fallen significantly, this must be seen in the context of a scenario of bumper prices spanning many decades,” he said.

“The copper market today is being driven by the greatest migration in the history of humanity, which is the rural-urban migration in China, where 500 million people are becoming consumers of electric cables, buildings, food processors, cars, and so on,” he said.

He dismissed the idea that in the medium term there could be a return to the copper prices seen in 2011, which reached an average of 3.99 dollars a pound, the highest since 1966.

“But neither does it mean that the ‘super cycle’ is over and that now we will go back to the situation that prevailed in the 1990s. In the medium term that is not likely to happen,” which means will continue to be the main source of Chile’s wealth, Balbontín said.