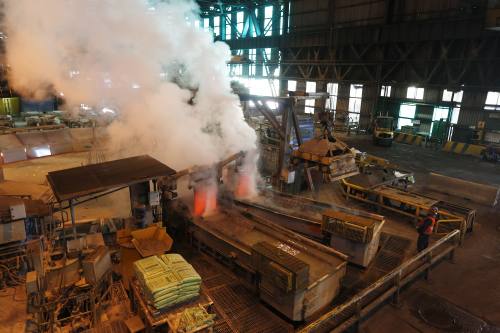 Copper smelter at the El Teniente mine. Credit: Marianela Jarroud/IPS

RANCAGUA, Chile, Apr 10 2013 (IPS) - El Teniente, the world’s largest underground copper mine, has already been in operation since 1905, but the state-owned National Copper Corporation of Chile (CODELCO) wants to keep it running for another 50 years.

This, however, will require the acquisition of cutting-edge technology and an investment of 3.278 dollars – roughly equivalent to the total amount invested in the mine since it was first opened.

El Teniente is located in the Andes mountain range, 150 kilometres south of Santiago. In 2010, it accounted for 25 percent of CODELCO’s total copper production.

The entire copper industry was nationalised in 1971 and is a major source of revenue for Chile, the world’s leading producer of the metal.

But the copper is running out in this section, which only contains enough reserves to last until 2025.

This is why CODELCO is undertaking the New Mine Level project, to reach the 2.02 billion tons of copper reserves located deeper down, at an altitude of 1,880 metres and 100 metres beneath El Teniente. The goal is for the new level to enter into operation in 2017.

The expansion plans form part of “a structural project within the Corporation, alongside the projects being undertaken in the Andina and Chuquicamata Underground divisions,” said CODELCO executive Millaray Farías, process manager at the crushing plant at the Pipa Norte mine, one of the eight reserves in operation within El Teniente. “It will allow us to prolong the life of the mine for many more years, since it is estimated that it will continue to operate until 2070,” she told Tierramérica*.

In the crushing plant, the copper ore extracted from the mine is broken down into smaller pieces.

As well as guaranteeing the maintenance of current volumes of production, the new mine will make it possible, in 2020, to begin the work necessary to raise production to 180,000 TPD.

Copper is valued at more than three dollars a pound on the London Metal Exchange. Last year, CODELCO generated 7.518 billion dollars in profits for the Chilean state, the third largest surplus in its history.

In order for the New Mine Level at El Teniente to enter into operation in 2017, it will be necessary to dig 98,450 metres of tunnels and 3,454 metres of vertical openings, such as ventilation shafts and ore passes, used to transport the copper out of the mine.

The new level will be accessed by two parallel 9.4-kilometre tunnels: one for the entry and exit of vehicles carrying workers, and the other for the conveyer belt used to transport the ore and the services area.

The copper in El Teniente is mined through the panel caving method. Blocks of ore the size of 50-storey buildings are blasted from beneath so that they fracture into rubble, which is then extracted with the help of gravity and teams of miners.

One particularly touchy point is worker fatalities: an average of 6.5 miners are killed in accidents annually, according to the statistics.

CODELCO’s Occupational Health and Safety Structural Project aims to reach a record of five years without fatalities, through measures such as the automation of particularly dangerous processes and the improvement of occupational health conditions in all areas.

“Traditionally, our people were used to the idea that production could not stop. Today, little by little, they are beginning to understand that the issue of safety involves everyone, and that they not only have to watch out for their own lives, but also for the lives of the other ‘old men’ (as the men who work in the mines refer to each other),” said Juan Bobadilla, the process engineering supervisor at the El Teniente smelter.

Safety measures at the division, where 5,000 workers are employed, are based on seven corporate values, the first of which is “respect for people’s life and dignity.”

On Mar. 23, a machine operator in the Radomiro Tomic division was killed, leading workers to stage a work stoppage which forced the company to temporarily shut down operations in this section of the mine.

The Pipa Norte deposit is currently equipped with the most modern technology. Remote-controlled load-haul-dump (LHD) loaders “are operated from the Colón concentrator – where the copper particles are separated from the ore and concentrated – located approximately 13 kilometres from the mine,” said Farías.

The crushing plant and grinding mill are also operated remotely, she added.

Despite the technological advances, human resources are still highly valued, because “naturally new technologies emerge that require the support of the old guys,” Bobadilla told Tierramérica, using the slang term popular among the mineworkers themselves.

“Therefore, those who have to retire will retire and those who are still sound will take on new positions. In other words, it will be painless,” he said.

Another of the core values espoused by CODELCO is the pursuit of sustainable development.

Bobadilla reported that 93.9 percent of the mine’s emissions of sulphur dioxide – the main contaminant produced there – are captured, so that only the remaining six percent are released into the atmosphere. The company is aiming to increase the proportion captured to 95 percent by 2017.

Luis Sandoval worked at El Teniente for 38 years. Now retired, he served as our guide at the company’s request.

As we made our way through a long underground tunnel, Sandoval told Tierramérica that El Teniente did away with mining camps years ago.

Today, the workers “go down” to Rancagua, where their houses and families are, when they finish their shifts, and only “go up” to the mines when they are scheduled to work.

As a result, “the sulphuric acid emissions from the mine do not affect the population,” he said.

The acid waste water is processed in a special treatment plant, and “we avoid releasing solid and liquid industrial wastes as much as possible, and take care of them here,” said Farías.