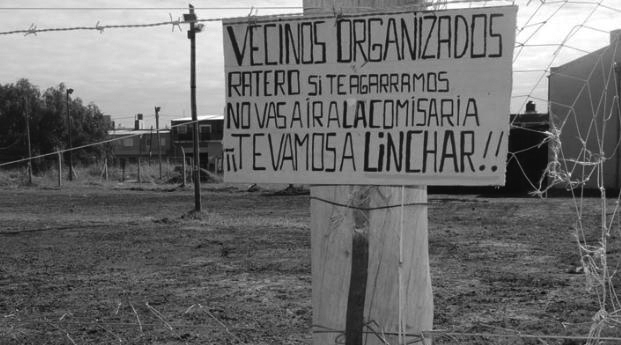 “Organised neighbours: Thief if we catch you, you’re not going to the police station, we’re going to lynch you!” Credit: Courtesy of the Cosecha Roja network

BUENOS AIRES, Apr 10 2014 (IPS) - The term “lynching”, which emerged in the United States and refers to vigilantism or a mob taking justice into its own hands, has now entered the vocabulary in a number of Latin American countries.

But while in some countries of Central America and South America’s Andean region mob justice is a longstanding phenomenon, it is new in Argentina. What is not new, however, is that the targets are the same old victims: the darker-skinned poor, in a modern-day version of vigilante justice.

In less than two weeks, a dozen lynchings or attempted lynchings were reported in Argentina. In the first, 18-year-old David Moreyra was killed on Mar. 22, after he allegedly tried to steal the purse of a woman in the central city of Rosario.

The term lynch law originated during the American Revolutionary War (1775-1783), when Charles Lynch, a justice of the peace and militiaman, presided over extralegal trials of Tories loyal to the British crown

The loyalists were executed even though they had previously been acquitted by a jury, says a study by sociologist Leandro Gamallo, who studied the phenomenon of lynching for his master’s thesis at the Latin American Faculty of Social Sciences.

Decades later, the term “lynch mob” began to be used to refer to the practice of groups of white men in the South of the United States setting out on patrols to hunt down blacks for whatever reason.

This “popular justice” later gave way to “the use of collective force as a method of racial exploitation and segregation by whites against blacks,” Gamallo said.

Lynchings are back in the headlines in Latin America today, whether “instigated” or merely “reported” by the media – depending on where one stands in an ongoing debate. They have now reared their ugly head in Argentina, a country where there is no deep-rooted tradition of “tribal community justice”, as there is in countries like Bolivia, Ecuador or Guatemala.

In Bolivia, the Defensoría del Pueblo or ombudsperson’s office reported 53 cases of vigilante justice killings between 2005 and October 2013.

Mob justice is also present to a greater or lesser extent in Brazil, Mexico, and countries in the Andean and Central American regions.

In Guatemala, political scientist Marcelo Colussi said they were linked to the breakdown in the social fabric by over three decades of civil war (1960-1996), when some 200,000 people – mainly Maya Indians in the highlands – were killed and 50,000 people were forcibly disappeared.

But in every case, the common denominator would seem to be the same: the victims are poor, indigenous or black people who are targeted by mobs taking justice into their own hands in response to a real or perceived rise in crime.

The victims “are still the same ones who suffered the worst of the repression in years past, and who historically have been left out of the benefits of development in Guatemala: impoverished Maya indigenous people,” Colussi said.

“There is a process of stigmatisation of poor young men,” Argentine historian Diego Galeano, at the Federal University of Rio de Janeiro, told IPS. He said, however, that it was premature to talk about a “wave” of lynchings in his country.

Argentine sociologist Maristella Svampa cited the looting that broke out in late 2013, starting in the central province of Córdoba, pointing out to IPS that “there were attempts to lynch suspected looters whose only ‘crime’, besides [being young and dark-skinned] was that they had tried to cross through the Nueva Córdoba upscale middle-class neighbourhood.”

But there is another problem that, according to Svampa, a researcher with the National Council of Scientific and Technical Research, a public institution, merits a warning: the appearance of armed groups ready to take action against looters – as seen in photos published on online social networks, which she interpreted as “a frightening attempt at the privatisation of justice.”

“Both developments [attempted lynchings and vigilante groups], as a collective response to the looting, were a symptom of a profound setback for democracy and human rights,” Svampa said.

“In a context marked by new social conflicts, greater inequality, growing social disorganisation and tough-on-crime rhetoric, our country seems to be opening up a dangerous Pandora box,” she said.

In Argentina, as expert on security policies Luis Somoza told IPS, the lynchings are occurring against a background of a sensation of rising crime.

“They are the reflection of a society that is totally fed up with the levels of crime,” said the professor at the University Institute of the Argentine Federal Police.

“People have the perception that the state isn’t protecting them, whether or not that is real,” he said.

“But this backsliding to a primitive state of society poses the additional risk of a probable appearance of non-state forces that take on the role of defenders, who refer to themselves as self-defence forces, militias, paramilitaries, death squads,” he said.

The juvenile public defender of the eastern city of La Plata, Julián Axat, associates the phenomenon with the impunity surrounding less-publicised lynchings that have been ignored by the media.

There are thousands of cases of poor adolescents being beaten up before they are arrested – kicked, slapped, pushed and spit on by crowds in incidents that appear to be accepted by the police.

“The impunity surrounding lynchings is what has contributed the most to generating the climate created by the repetition of these events. It’s not the media; it’s the police and the justice systems, who don’t arrest them,” Axat wrote in an article.

“To paraphrase Bertolt Brecht, today it’s the dark-skinned people with kinky hair, tomorrow possibly those who go after them, while the powers-that-be and the police will thank them because they will continue to do brisk business with the ‘insecurity’ and with a society where the poor kill the less poor and the authoritarian middle class applauds,” human rights lawyer Claudia Orosz told IPS.

In any case, the experience of Guatemala, one of the countries with the highest homicide rates in the world, demonstrates that lynchings do not dissuade crime.

“Although numerous criminals have been the victims of ‘mob justice’, the crime rates throughout the country, and in former war zones as well, remain alarmingly high,” Colussi said.

In Argentina, President Cristina Fernández said on Mar. 31 that “anything that generates violence will always, always engender more violence,” referring to a phenomenon – lynching – that she avoided naming.