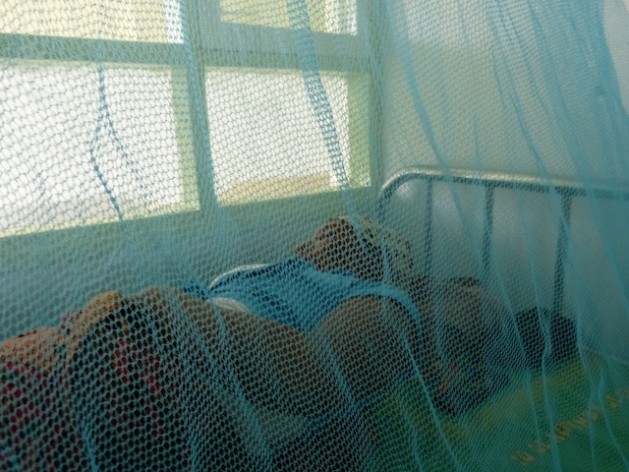 LUSAKA, Apr 25 2014 (IPS) - Zambian Martha Nalishupe is torn between taking one more pill with her daily regimen of antiretrovirals, or run the risk of a miscarriage.

Struggling to adhere to her antiretroviral (ARVs) therapy, she now has to add a tablet to prevent malaria.

Though she only has to take the malaria pills three times, every four weeks, till she gives birth, Nalishupe is weary: “I already struggle to take my ARVs, now this tablet… I don’t like taking tablets, they leave an after taste in my mouth, but the nurse said if I catch malaria, I may lose my pregnancy.’’

Five months pregnant Ruth Malikaso, who is HIV negative and has been put on the malaria prophylaxis Fansidar, is also in two minds: ”Fansidar makes me nauseous; I don’t want to be sick so close to delivery.”

But their midwife Keren Zulu is adamant. She says she is a ”bully’’ when it comes to helping women at the Chawama clinic in the outskirts of Lusaka avoid malaria.

“If I don’t trust that they are taking their medication, I make them do it in front of me. That does not always make me the midwife of choice, but I am not in a popularity contest,” she tells IPS.

Zulu follows the World Health Organisation (WHO) protocol where all pregnant women in high malaria areas are given intermittent preventive treatment in the second trimester and must sleep under insecticide treated nets.

For HIV positive pregnant women, WHO recommends a course of the antibiotic Septrin, and for HIV negative women, the three tablet Fansidar.

Malaria in pregnant women is dangerous as it lowers their immunity. WHO calls it a major health problem, with adverse effects such as anaemia, low birth weight, prematurity, maternal death, stillbirth and miscarriage.

Zulu says it’s worth enduring side effects for a couple of days, considering this could save lives.

“I have seen too many mothers and babies die or suffer because this simple regimen was not adhered to,” she says.

For HIV positive women like Nalishupe, the situation is especially precarious. In a compromised immune system, acute malaria increases viral load and quickens progression to AIDS.

Research suggests that malaria infection during pregnancy can increase the risk of mother-to-child transmission of HIV in the womb, during birth and breastfeeding.

“Malaria infections are often asymptomatic when the parasite sequesters in the placenta,” she explains. Because malaria symptoms resemble those of a pregnancy and of HIV-related infections, like fever, nausea, vomiting and headache, it is vital that the women are properly diagnosed.

The geographical overlap in HIV and malaria infections poses special problems. A UNICEF study reports that the largest burden of co-infection lies in Africa, the continent with the greatest burden of malaria, and where more than three quarters of all HIV-infected women live.

Most affected by HIV and malaria co-infection are the Central African Republic, Malawi, Mozambique, Zambia and Zimbabwe, where some 90 per cent of adults are exposed to malaria and average adult HIV prevalence surpasses 10 percent.

Malaria in HIV positive women can restrict foetal growth, result in low-birthweight babies and reduce the transfer to children of maternal immunities to infectious diseases such as streptococcus pneumonia, tetanus and measles.

Kebby Musokotwane, a medical doctor with the Ministry of Community Development, Mother and Child Health, told IPS that in Zambia one in six pregnant women is HIV positive. “This is quite high,’’ he warns.

The problem, says Musokotwane, is that many women start antenatal care late.

“There are some myths surrounding announcing pregnancies early, so women wait until they are advanced before going to the clinic,” he says.

Buj confirms that the uptake of antenatal services is very low in most African countries.

Malikaso was at the clinic only to ”book’’ in her last trimester. This means obtaining the antenatal card that will ensure her a bed, a birth certificate and postnatal care without a long registration process.

The taboos around discussing pregnancy delayed Malikaso’s first visit to the clinic.

“We are taught not to announce early as you are inviting bad luck,” she says. ”Culturally, you are not supposed to announce to your in-laws or people around you that you have been having sex, they will just see.”

In Zambia, malaria accounts for 20 percent of maternal deaths and AIDS for 30 percent, according to U.N. estimates.

Against this unacceptably high rate, Zambia will distribute 5.6 million insecticide treated nets in 2014.

This is good, says Zulu, but, as she reaches retirement age this year, she has regrets: “I had hoped that in my lifetime we would eliminate malaria in pregnant women.”

“The helplessness that overcomes me is only matched by the anger that it is a preventable disease, whose solution lies in a small change in how a woman perceives her health,’’ she says.