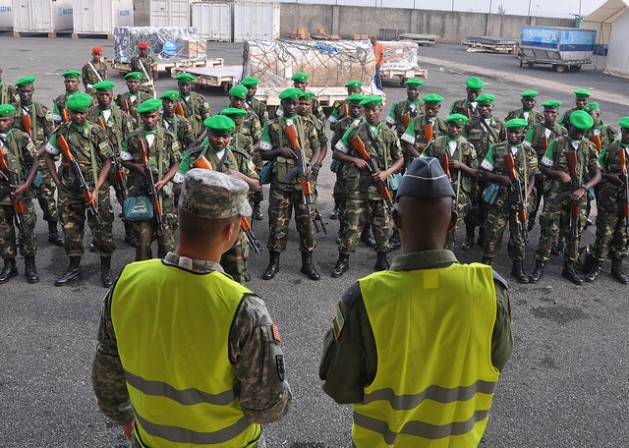 UNITED NATIONS, Apr 10 2014 (IPS) - Amid alarming reports of ethnic cleansing in the Central African Republic, the U.N. Security Council voted unanimously Thursday to send an official peacekeeping mission to the conflict-torn country where the minority Muslim population has all but disappeared in much its Western half.

The French-authored resolution would rely on a force of some 10,000 troops and 2,000 police to restore order and prevent further sectarian violence that has left thousands dead and displaced roughly a quarter of the population.

“The roads and bridges need to be fixed, all the transportation infrastructure. In Bangui there are only two hotels." -- spokesperson for U.N. peacekeeping

The Council in December mandated a joint AU-French force that thus far has proven unable to clamp down on violence against the Muslim communities, particularly outside of the capital Bangui, where peacekeepers have been light on the ground.

The Council’s morning session was preceded by reports of anti-balaka attacks in the central town of Dekoa, 300 kms north of Bangui, that left some 13 dead.

Despite Thursday’s vote, rights groups point out it will be a full six months before the mission, known as MINUSCA, is operational.

“Clearly, a U.N. peacekeeping operation, once fully deployed, can contribute to peace and stability over the long term. But this mission will not address the atrocities, displacement, and dire humanitarian needs on the ground today.”

A “re-hatting” of many of the 5,000 AU troops would take place on Sep. 15, the official start date of MINUSCA’s peacekeeping operations. It is unclear, given a paucity of peacekeepers in several other countries, how long it will take the mission to reach full capacity.

“You will not even be getting to 10,000 troops by September given the global shortage,” Yarnell told IPS. “There is no guarantee they will arrive by that date.”

A spokesperson for U.N. peacekeeping told IPS the landlocked country is a particularly difficult location to build the infrastructure for a mission from scratch.

“We can send engineers to assist and we’ll ship some equipment and cargo to Cameroon, the nearest port,” he said. “The roads and bridges need to be fixed, all the transportation infrastructure.  In Bangui there are only two hotels – we will need to construct our bases, starting with sanitary facilities and offices.”

The transition will come nearly two years after the Séléka, a loose coalition of predominantly Muslim rebels from CAR’s neglected northwest and Chad, announced their alliance and took up arms against the government of former president François Bozizé.

In March of 2013, the rebels captured Bangui and for nearly a year presided over a state of anarchy, pilfering what was left of the state infrastructure and targeting Christians with impunity.

Christian anti-balaka self-defence militias with unclear ties to the former regime formed to combat the rebels. Following the arrival of French and African Union troops in December, the militias began gaining the upper hand.

In January, under international pressure, former Seleka leader Michel Djotodia resigned the presidency and ex-Seleka forces began pulling back from the capital, creating a power vacuum and leaving Muslim communities under threat from the vengeful Christian majority.

Peacekeepers were slow to recognise the anti-balaka as a new and larger threat, even as militias repeatedly carried out massacres in Muslim enclaves. The result, according to the U.N., has been the “ethnic-religious cleansing” of the West of CAR.

In a report, Amnesty International called the exodus of Muslims from CAR “a tragedy of historic proportions.”

“Not only does the current pattern of ethnic cleansing do tremendous damage to the Central African Republic itself, it sets a terrible precedent for other countries in the region, many of which are already struggling with their own sectarian and inter-ethnic conflicts,” the report said.

In response to a Central African government request, the resolution gives MINUSCA the emergency capacity to supplement the state’s meagre police force by authorising peacekeepers to make arrests and carry out basic law and order functions.

The first of an expected 1,000 EU peacekeepers arrived this week and are expected to spell French troops that have guarded a makeshift camp for displaced persons at Bangui’s aiport. Until MINUSCA is fully functional, EU advisors are meant to assist local authorities in rebuilding the criminal justice system. Several recent arrests of anti-balaka leaders have seen them flee or be released only hours later.

The Security Council had an opportunity to mandate a peacekeeping mission as far back as November, but due to logistical and financial concerns gave the AU time to demonstrate its capacity at peacekeeping on the continent.

Though observers have highlighted the efforts of troops from Rwanda and Burundi, Chadian peacekeepers were implicated in atrocities of their own, including the deaths of over 30 civilians in a market on Mar. 29. The Chadians were allegedly attempting to evacuate residents from one of Bangui’s few remaining Muslim enclaves when they opened fire.

Chad has since withdrawn its battalion from the AU mission, forcing African leaders to search for a further 850 troops.

The CAR vote comes as Rwanda commemorates its own 100 days genocide that began 20 years ago this week.