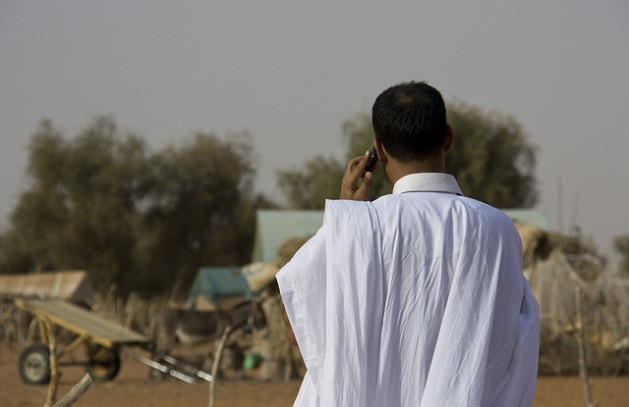 New studies argue that mobile technologies can be more effective than microcredit in promoting entrepreneurship and fighting poverty in developing countries, like Mauritania. Credit: Kristin Palitza/IPS

WASHINGTON , May 31 2014 (IPS) - Mobile-finance and direct cash grants are revolutionary tools that can substitute for under-developed financial sectors and help reduce poverty and promote entrepreneurship in developing countries, according to researchers here.

In a teleconference hosted by the New York-based Council on Foreign Relations (CFR), one of the country’s most influential think tanks, the two men argued that mobile technologies can help poor people in developing countries manage their personal finances, including savings, insurance, credit, and cash transfers that many in the developed world take for granted.

Mobile technologies can help fill the gap by providing easy and free access to financial tools, according to an article published in CFR’s journal, ‘Foreign Affairs’, co-written by Voorhies and Jake Kendall, who also works at the Gates Foundation.

The article, ‘The Mobile Finance Revolution’, cites World Bank statistics showing that, on average, nearly nine out of every ten people living in a developing country have a cell-phone account, although some users may, of course, have multiple accounts.

Mobile technologies are more effective than much-lauded microcredit programmes in promoting entrepreneurship and fighting poverty, according to the article.

Among other advantages, they eliminate the bureaucracy and routine banking costs associated with in-person and cash transactions. In addition, mobile-finance clients generate data that can be further used by banks and investors as an alternative for the traditional credit scores, according to Voorhies and Kendall.

In a second article titled ‘Show Them the Money’, Blattman and Paul Niehaus, who teaches economics at the University of California San Diego, detail recent studies that show the effectiveness of cash grants and outline the comparative disadvantages of microloans and related programmes, such as donating money to buy cows, goats, seeds, beans, tools, and other agricultural inputs, as well as schoolbooks and clothing for poor families.

Not everybody wants a cow

Despite the fact that the microcredit movement brought significant positive results – recognised in 2006 when the Bangladesh-based Grameen Bank and its founder, Muhammad Yunus, were awarded with a Nobel Peace Prize – a series of more recent studies on the effects of microloans have put their success into question, according to Blattman and Niehaus.

In one study, the economist Abhijit Banerjee of the Massachusetts Institute of Technology (MIT) and a number of collaborators examined the case of the Indian non-profit Spandana that provided 250 dollar loans to women in Hyderabad at low-interest rates. Over three years, they found no measurable improvements in the education, health, poverty, or women’s empowerment among the recipients.

After collecting an additional 20 years of data on Spandana’s lending and their borrowers, Banerjee found “no evidence of large sustained consumption or income gains as a result of access to microcredit.”

As for the effectiveness of training programmes, economists David McKenzie and Christopher Woodruff reviewed the outcomes of the International Labour Organisation’s ‘Start and Improve your Business Programme’ that has provided training to over 4.5 million people in over 100 countries since 1977. They found that there was little lasting effect on the sales or profits of the business owners in the recipient countries.

“No wonder people in developing countries, when given the choice, don’t necessarily choose to invest in skills training,” write Blattman and Niehaus.

The two authors argue that providing cash grants to poor people directly is also preferable to supplying goods that will presumably be used by recipients to increase their income or skills.

They argue that poor people in developing countries often use the cash to buy the same things that aid organisations would provide, such as livestock, tools, or training, in any event, but giving people cash directly provides them with more flexibility.

“Not everyone, after all, wants a cow,” the authors write.

Blattman and Niehaus do not deny the benefits of aid, training programmes, and microloans but insist that significant improvements are possible depending on how the money is allocated.

In a study conducted in Uganda, 250 groups of 15-25 young adults were each given 400 dollars in cash to spend as they wished, so long as the purpose was to enhance their livelihood.

The study found that most of the money was spent on acquiring the physical tools and materials they needed to start working, and only ten percent was used for training. It turned out that over four years, the participants’ incomes rose by an average of 40 percent.

A similar study was conducted in Liberia, where unconditional 200 dollar grants were given to drug addicts and petty criminals. The recipients “did not waste the money,” but used it to fund legitimate enterprises.

“Fears that poor people waste cash are simply not borne out by the available data,” the authors write.

Blattman and Niehaus outline the benefits of cash transfers over traditional aid programmes. They emphasise the importance of money transfers in places where the population has been hit by unexpected crises – conflicts, natural disasters, or extended periods of political uncertainty.

“Think of Southeast Asia after [the] tsunami or the Middle East flooded with Syrian refugees, where the returns on capital after a recovery period are likely to be unusually high and the challenge of making smart investments without localised knowledge unusually large,” the authors write.

Further, cash transfers are essential to emerging markets that have relatively stable economies but where few firms offer jobs and where most workers, by necessity, are self-employed.

More specifically, the authors suggest that cash transfers better enable entrepreneurs to start businesses in countries where banks and other credit institutions are weak or under-developed.

Just as Blattman and Niehaus argue that cash transfers can be particularly helpful in emergency situations, Kendall and Voorhies insist that cell phones may actually prove more effective.

“A study in Niger by a researcher from Tufts University found that during a drought, allowing people to request emergency government support through their cell phones resulted in better diets for those people, compared with the diets of those who received cash handouts,” according to the authors.

In addition, studies have shown that cell phones encourage financial discipline and savings. In Malawi, for example, farmers were offered an option to have their harvest proceeds directly deposited into savings accounts. Those farmers who chose this option ended up investing 30 percent more in farm inputs and had a 22 percent increase in revenues compared to those who chose not to participate.

But while both articles articulate valid criticisms of how aid and microloan organisations operate, they fail to address important aspects. The most obvious are literacy rates, especially low financial literacy that is often prevalent in developing countries. The issues that need to be considered with mobile-finance are the access of affordable network providers as well as a very basic one – electricity.