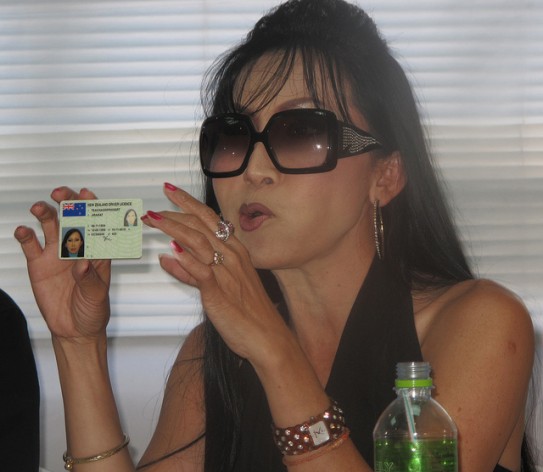 In New Zealand, where Sujinrat Prachathai enjoys resident status, she is a woman able to append ‘Mrs’ to her name to signify that she is married. In Thailand, however, she is still legally considered male even though she underwent a sex-change operation years ago. Here, Sarah holds up her New Zealand ID card, which recognises her a woman. Credit: Sutthida Malikaew/IPS

UNITED NATIONS, May 5 2014 (IPS) - The world is slowly, but painfully, moving towards the formal recognition of the existence of a third gender besides male and female.

“The rights of transgender people – to their own identity and to access to health, education, work, housing and other rights – are being increasingly widely recognised,” Charles Radcliffe, chief of the Global Issues Section in the Office of the U.N. High Commissioner for Human Rights, told IPS.

"What is also incredibly significant about this court's decision is that it legalises third gender recognition for transwomen and transmen, and does not require sex reassignment surgery for legal recognition as third gender." -- Grace Poore

In South Asia, he noted, there has long been a tradition of a third gender. Pakistan, Bangladesh and Nepal have all moved in the direction of granting recognition to trans or third gender people.

But other regions are now following suit, he added, pointing out that Argentina passed a law on gender identity in 2012 that is widely seen as a model for the rest of the world.

“European countries, many of which still required trans people to be sterilised before they can obtain identity papers that reflect their gender, are one by one reviewing their policies,” said Radcliffe.

U.N. spokesperson Stephane Dujarric said India’s decision officially recognises a third gender in law and confirms that discrimination on grounds of gender identity is impermissible under the Indian Constitution.

“It should pave the way for reforms that make it easier for transgender persons in India to obtain legal recognition of their gender identity, as well as access to employment and public services,” he added.

According to unofficial figures, India is estimated to have about two million transgender people, out of a total population of over 1.3 billion.

“Not only did the justices challenge the oppressiveness of forcing people to conform to the gender binary and the discrimination that accompanies that coerced conformity, but they state that not recognising gender identity violates the Indian Constitution,” she noted.

Poore said the violation denies transgender people basic human rights protected under the constitution: right to life, right to liberty and dignity, right to privacy, right to freedom of expression, right to education, right against violence and exploitation, and right to non-discrimination.

“All these rights, according to the justices, can be achieved if the beginning is made with recognition that TG is a third gender,” Poore added.

“What is also incredibly significant about this court’s decision is that it legalises third gender recognition for transwomen and transmen, and does not require sex reassignment surgery for legal recognition as third gender,” she noted.

The judges in the trans rights ruling go so far as to say that discrimination on the grounds of sexual orientation also amounts to discrimination.

“What’s left now is for the Supreme Court to decriminalise homosexuality and rule that Section 377 of India’s Penal Code is unconstitutional,” Poore said.

In 2012, according to IGLHRC, Argentina adopted one of the most progressive gender identity recognition laws to date by removing any prerequisites to changing one’s gender, most notably eliminating the need for any medical diagnosis or surgery.

The Netherlands, Denmark and Sweden have also recently adopted or updated legislation to enable individuals to change their gender identity without the need for undergoing sex reassignment surgery.

In Chile, a progressive gender identity law is currently being considered by lawmakers, according to IGLHRC.

“With this judgment, the Supreme Court restored their dignity, while doing away with the rule which was introduced by British colonial law,” Dittrich told IPS.

The court is very clear about it: the plight of transgender people is being recognised as a human rights topic.

Transgender people have been unfairly treated under section 377 of the Indian Penal Code, another British colonial legacy that should be revoked, he added.

Dittrich also singled out Argentina as having a positive legal track record on transgender issues.

“Their gender recognition law is an example to the rest of the world,” he added.

Jose Luis-Diaz, head of the Amnesty International U.N. Office, told IPS the court ruling could improve the lives of millions of transgender people in India – people who have suffered oppression for years.

The ruling reaffirms constitutional values of inclusion and equality.

“However, as long as Section 377 of the Indian Penal Code stays on the books, discrimination and violence based on sexual orientation and gender identity will remain a threat,” he added.

“As you know, Section 377, upheld by the same Supreme Court in a ruling last December, criminalises consensual same-sex conduct between adults. This law ought to be repealed.”

Meanwhile, by a happy coincidence, a musical comedy about a transgender rocker, “Hedwig and the Angry Inch” was nominated last week for eight Tony Awards, one of the most prestigious awards on the Broadway stage in New York City.