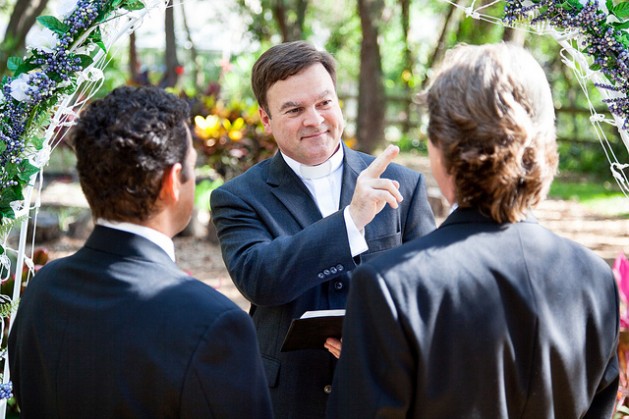 WASHINGTON, May 16 2014 (IPS) - Honouring the International Day Against Homophobia and Transphobia, U.S. Secretary of State John Kerry Friday emphasised progress in advancing the rights of lesbian, gay, bisexual, and transgender (LGBT) persons, but a new report on criminalisation of LBGT people suggests that there is still a long way to go.

“Today of all days, we are reminded that the cause of justice can and must triumph over hatred and prejudice,” said Kerry said in a statement.

“The United States arrests and prosecutes more people on the basis of their HIV status than the rest of the world combined." -- Catherine Hanssens

Undeniably, a number of events over the past week indicate significant advances in LGBT rights.

Nonetheless, LGBT people and and People Living with HIV (PLWH) experience higher rates of homelessness and poverty, lower levels of education, and high rates of family and community rejection, according to the report.

“Seventy-three percent of LGBT people and PLWH have had run-ins with police in the past five years,” said Aisha Moodie-Mills, co-author of the report and a senior fellow at the Center for American Progress (CAP), a think tank considered close to the administration of President Barack Obama.

“Oftentimes these groups also experience police misconduct such as false arrests and verbal, physical, and sexual abuse while in police custody,” she told IPS.

• Urging the Department of Education to facilitate increased school programming on LGBT issues and HIV-related issues.

• Encouraging the Department of Labour to provide more training to officials on sexual orientation and gender identity to reduce discrimination in agencies such as the Job Corps and One-Stop Career Centres.

“Police profile transgender women and use possession of condoms as evidence of prostitution-related offenses and grounds for arrest,” Moodie-Mills said. “And, in 36 states there are laws that criminalise HIV exposure. PLWH can be charged with felonies for having consensual sex, biting, and spitting despite the fact that spitting and biting have not been shown to pose significant risks for HIV transmission.”

Further, some states that do not have HIV-specific laws prosecute PLWH under more general criminal laws, including attempted murder, assault, and even bio-terrorism.

According to conservative estimates by the New York-based Center for HIV Law and Policy, nearly 200 PLWH have been prosecuted since 2008. In Texas, for example, a man with HIV is serving 35 years for spitting at a police officer. In New York, a man was sentenced to 10 years for aggravated assault for biting a police officer.

“The United States arrests and prosecutes more people on the basis of their HIV status than the rest of the world combined,” noted Catherine Hanssens, the centre’s executive director and a co-author.

“The policies that drive these arrests spring from profoundly phobic misconceptions about the actual routes, risks, and consequences of HIV transmission and federal health officials’ refusal to promote frank, accurate information about sex, sexual orientation, and gender identity.”

The particular needs of LGBT people and PLWH are often overlooked when in jail. For example, discriminatory attitudes toward LGBT people prevent them from reporting sexual assaults. Despite the Prison Rape Elimination Act of 2003 (PREA) – the first federal law passed that deals with sexual assault of prisoners.

“Justice continues to be elusive and conditional for these populations due to a range of unequal laws and policies that dehumanise, victimise, and criminalise them because of their sexual orientation, gender identity, or HIV status,” says the report.

The report was generated in collaboration with over 50 activists, policy advocates, lawyers, and grassroots organisations working on LGBT criminalisation and racial justice issues and is the first comprehensive publication to offer policy recommendations to the all levels of government, from local police and state prisons to federal agencies and prosecutors.

They call for more aggressive efforts to curb discrimination in policing and law enforcement, to stop violence and discrimination inside prisons and detention centers, including the federally funded immigrant detention facilities.

PREA can be amended to better address specific issues LGBT people face with in prisons, according to the report. This also includes allowing transgender people to specify the gender of the officer they would prefer to conduct searches on their persons and specifically to ban prohibit degrading and invasive genital searches.

Criminalisation and official harassment of LGBT people and PLWH are widespread across the world, particularly in sub-Saharan Africa, where the governments of Nigeria and Uganda have recently approved laws that impose draconian punishment on homosexual conduct.

On May 19, the Center for Strategic and International Studies (CSIS) Global Health Policy Center will issue a new report on the criminalisation of homosexuality at the Third Atlanta Summit on Health in Africa.