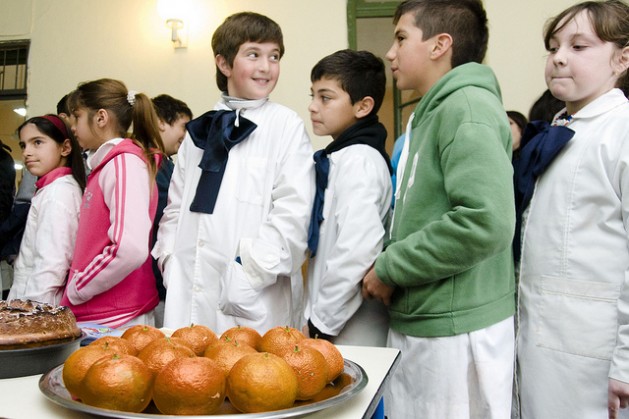 Schools around the world, like this one in Melilla, Uruguay, are trying to introduce healthy eating habits to bring down rates of obesity and overweight. Credit: Victoria Rodríguez/IPS

WASHINGTON , May 31 2014 (IPS) - Over two billion people – or 30 percent of the world’s population – are either obese or overweight, and no country has successfully reduced obesity rates to date, according to a new study published this week by the British medical journal, The Lancet.

The number of overweight and obese people increased from 857 million in 1980 to 2.1 billion in 2013, according to the research, which was conducted by the Institute for Health Metrics and Evaluation (IHME) at the University of Washington and funded by the Bill & Melinda Gates Foundation.

Titled “Global, regional, and national prevalence of overweight and obesity in children and adults during 1980-2013,” the study calls obesity a “major public health epidemic” in both the developed and the developing regions of the world.

An individual is considered to be overweight if he or she has a Body Mass Index (BMI), or weight-to-height ratio, greater than or equal to 25 and lower than 30, while obesity is defined as having BMI equal to or greater than 30.

“Obesity is an issue affecting people of all ages and incomes, everywhere,” said Dr. Christopher Murray, director of IHME and a co-founder of the Global Burden of Disease (GBD) study.

Not surprisingly, the largest proportion of the world’s obese people are found in the United States (13 percent).

In the Middle East and North Africa (MENA), Central America, and the island nations of the Pacific and the Caribbean, overweight and obesity rates have skyrocketed over the past 30 years – to 44 percent or higher.

Several oil-rich states in the MENA region – including Saudi Arabia, Kuwait, Qatar, and Libya – account for the world’s largest increase in obesity over the past generation.
But rates are also increasing the world’s two most populous nations – China and India. They currently account for 15 percent of the world’s overweight or obese population.

“These trends have nothing to do with genetics, but rather our lifestyle that has increasingly become indoors and immobile,” Ali Mokdad, who teaches at the University of Washington in Seattle, told IPS.

“We are paying the price for progress,” Mokdad, one of the study’s co-authors, added. “Machines have made our lives easier; thanks to machines, we can produce food faster and cheaper than ever, while microwaves make meals quick and easy. All these contribute to the problem.”

“We know that there are severe downstream health effects from childhood obesity, including cardiovascular disease, diabetes, and many cancers. We need to be thinking now about how to turn this trend around,” said the study’s lead author Marie Ng.

The study stresses the need to mobilise not only the people, but also governments in the fight against obesity and its consequences.

“It’s not only the Ministry of Health that has to be concerned, but also the Ministry of Agriculture which needs to take into account how to build programmes and develop infrastructure in a way that would encourage people to be more healthy,” according to Mokdad.

He saluted U.S. First Lady Michelle Obama’s initiative “Let’s Move!” – a four-year-old effort “to end the epidemic of childhood obesity in a generation so that kids born today will grow up healthy.” In addition to encouraging exercise among youths, “Let’s Move!” urges schools to reduce the excessive consumption of sugar, salt, and fat and include more fruits and vegetables in meals served to students.

In a column published Thursday by the New York Times, the First Lady wrote that the U.S. spends 190 billion dollars a year treating obesity-related conditions in the general population. ”Just think about what those numbers will look like in a decade or two if we don’t start solving this problem now,” she wrote.

Among South Americans, Chileans and Paraguayans led the region, with 66.1 percent and 63.9 percent, respectively.

In sub-Saharan Africa, where obesity and overweight were least prevalent among all regions, oil-rich Equatorial Guinea was the regional leader, with 58.7 percent of the population obese or overweight. It was followed by South Africa, at 52.9 percent, and another oil-rich country, Gabon, at 47.7 percent. In Ethiopia, by contrast, only 5.5 percent of the population was obese or overweight.

South and East Asia were also relatively slim, compared to wealthier regions. Malaysia was the heavyweight at 45.3 percent, followed by South Korea (33.2 percent), Pakistan (30.7 percent), and China (28.3 percent). By contrast, less than one out of five Indians were obese or overweight (19.5) percent.

The leanest, however, included Vietnam (12.4 percent), while North Korea and Timor Leste tied for the world’s lowest prevalence at 4.6 percent, according to the study. Rates in neighbouring Australia, on the other hand, neared those of the world’s heaviest, at 63.3 percent.

Most of the countries that are heaviest today, including Libya, Egypt, Iceland, as well as many wealthy countries, were also heaviest 30 years ago. But the obesity and overweight gap between them and most developing countries, particularly in sub-Saharan Africa and Asia, has since closed.

In 1980 China, for example, only about ten percent of the population was overweight or obese – or about one-third of the percentage in 2012.