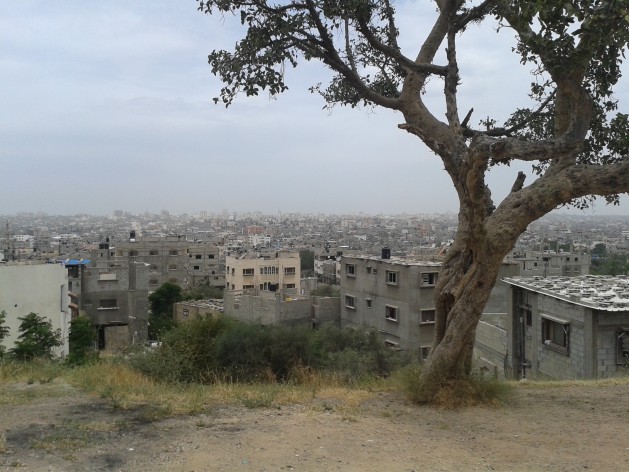 Gaza City, with a population of more than half a million people, spreads along the sandy shores of the Mediterranean Sea. Credit: Marjut Helminen/IPS

GAZA CITY, May 29 2014 (IPS) - “We let the men participate in the workshop discussions, but the training sessions are only for women journalists,” says Mona Khadir, who coordinates the activities of the Filastiniyat Women Journalists’ Club in Gaza. The meeting hall at a hotel in Gaza is full of journalists, both women and men. What catches the eye is the row of TV cameras and microphones behind the audience.

They are there for the workshop organised by Filastiniyat, a non-governmental advocacy organisation committed to ensuring and supporting the equitable participation of Palestinian women and youth at all levels of the public sphere.

Filastiniyat workshops offer a platform for vivid discussion and varied viewpoints, and such events never fail to draw media attention.

“We make the voice of women heard in the society” – Wafa' Abdel Rahaman, founder of Filastiniyat
Raising a chorus of many voices – where everybody is welcome, irrespective of religion, political views or differing ways of thinking – is a rare opportunity in today’s Gaza.

The political division that has lasted since 2007 in Palestine between the two largest Palestinian political parties and long-standing rivals, the Fatah government in the West Bank and the Hamas government in the Gaza Strip, has had a significant effect on the exercise of freedom of opinion and expression – and on women’s lives, whether journalists or citizens.

Filastiniyat’s activities offer an alternative view and much food for thought, considering that those in power in Gaza favour steps to segregate women and men in all spheres of life.

“We make the voice of women heard in the society,” says Wafa’ Abdel Rahaman, founder of Filastiniyat in Ramallah in the West Bank.

Several Palestinian men admitted to IPS that they respect the Filastiniyat as something unique and fresh. The club does something nobody else dares to do, they said. It offers an alternative to the conversation culture and a way of searching for common ground for action.

Although the activists of the volunteer organisation do not put it this way, it seems that the women journalists’ club aims at freeing journalism from narrow-minded party politics and taking it back to its roots, to informing the public in a spirit of free speech and right to information.

In the journalism field in Gaza, telling the truth can be life-threatening and the attack against free speech comes both from the Israeli occupation forces and from the domestic political leadership. Media outlets in the Gaza Strip have been prohibited from criticising the practices of the Hamas government, particularly regarding human rights violations.

But the voices of women journalists are being heard not only inside meeting rooms. Earlier this month, Filastiniyat invited journalists to discuss Palestinian reconciliation and ways to put an end to the split between Hamas and Fatah in Gaza. Al Jazeera TV broadcast this lengthy discussion live to the Arab world, and others, like Palestinian TV and several other media gave it extensive coverage.

“Our club is first of all about empowering women journalists and we do it in many ways, giving them an opportunity to raise their voice, increase professional skills, as well as offering relaxation and networking through social activities,” explains Khadir.

Some of the club’s activities might seem trivial at first glance, but a closer look reveals that they can mean a world to the women journalists struggling for professional survival in the male dominated and segregated society.

Psycho-social support, yoga and excursions offer relaxation and the possibility to forget for a moment the stress of everyday life – like the regular cuts in electricity or tap water, which is salty and poisoned with minerals, and the siege over Gaza, which imprisons the population in ghetto conditions.

Women journalists in Gaza are not only struggling with basic necessities for existence for themselves and their families, but also for employment.

UNESCO and Birzeit University’s Media Development Centre are about to release an in-depth Media Development Indicators Report, which analyses different factors of freedom of speech and media freedom in Palestine. According to this study, discrimination of women journalists is deeply rooted in media houses and union life, and the rights of all journalists are constantly violated both by the Israeli occupational authorities and the Palestinian authorities.