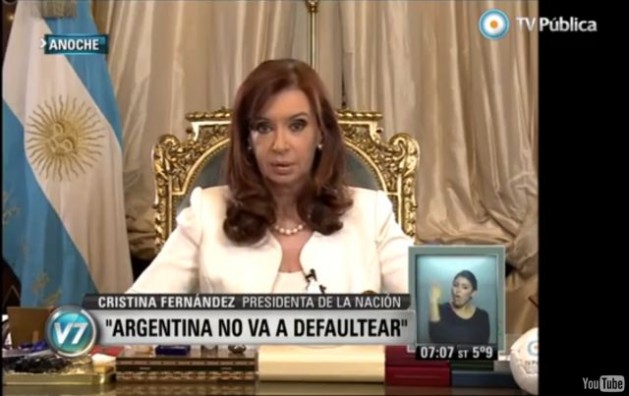 MONTEVIDEO, Jun 17 2014 (IPS) - Argentina finds itself in a strange position since the U.S. Supreme Court rejected its appeal Monday to take a case in which a small group of creditors is suing this country for full repayment: it is on the brink of default even though it is one of the countries in the world that has done the most to dig itself out of debt.

The Supreme Court decision in the case Republic of Argentina v. NML Capital leaves in place a 2012 ruling handed down by the second district court of New York, ordering Buenos Aires to pay bondholders, immediately and in full, some 1.5 billion dollars – an amount that includes interest and penalties.

But it also sets a precedent with respect to all of the unpaid debt in the hands of other speculative bondholders, totalling around 16 billion dollars.

This amount, however, “is equivalent to just three percent of Argentina’s GDP,” economist Ramiro Castiñeira, with the Econométrica consultancy, told IPS.

“It doesn’t make sense for Argentina to default over that amount, when it is one of the countries that has advanced the most in reducing its debt in the past few years,” Castiñeira argued.

The problem is that Argentina does not have 16 billion dollars in cash – the equivalent of half of its foreign reserves, which were hit hard by a series of restrictive monetary policies that fuelled capital flight.

Argentine President Cristina Fernández complained about the Supreme Court ruling Monday night, calling it “extortion” while stressing that her country would continue to make repayments to lenders who had agreed on renegotiated settlements.

After Argentina defaulted on its foreign debt in late 2001 during the worst economic crisis in the country’s history, the government made enormous efforts to work its way out of debt, which had reached 160 percent of GDP.

It repaid the World Bank and International Monetary Fund (IMF) in full and restructured the debt held by 92.4 percent of bondholders, at a deep discount, in 2005 and 2010.

The debt shrank to manageable volumes. In late May, Argentina reached an agreement with the Paris Club of creditor nations for repaying overdue debts. And earlier this year, the government agreed on a package to compensate Spanish oil company Repsol for the 2012 nationalisation of its subsidiary YPF.

But the situation produced by the Supreme Court ruling could jeopadise everything achieved so far.

The sentence prohibits banks in New York from making interest and principal payments to creditors that accepted the restructuring unless the New York-based hedge fund NML Capital is paid.

On Jun. 30, Buenos Aires is to pay 532 million dollars for bonds issued under foreign legislation.

To avoid the embargo, payment jurisdicion could be modified by means of a voluntary swap. “The idea might seem tempting, but it is impracticable and would also mean falling into technical default” by changing the parameters set when bonds are issued, Argentine economist Leonardo Stanley, associated with the Centro de Estudios de Estado y Sociedad (CEDES) think tank , told IPS.

Although Fernández’s statement was ambiguous, Stanley’s interpretation is that the president expressed a willingness to pay. That means “negotiations will have to start with the holdouts [creditors who refused the restructuring], which could take place within the context of what the judge handling the case [in New York] is asking for,” he said.

Stanley said: “From here on out the decision is political. Just as it reached agreements recently with Repsol and the Paris Club, the government should sit down and negotiate with Paul Singer,” whose hedge fund, Elliott Management, is the parent company of NML Capital.

The economic impact is inevitable, he added, “although the current government would not necessarily have to deal with it,” as Fernández’s term ends in December 2015. For that reason, “any proposal would have to be made in the legislative sphere,” which would help boost “transparency and credibility,” he said.

In her address to the nation Monday, Fernández said “this case has repercussions for the entire global financial system. [The ruling] validates a business model on a global scale which, if it continues to be reinforced, will produce unimaginable tragedies.”

Eric LeCompte, executive director of the religious anti-poverty organisation Jubilee USA Network, said in a statement that “For heavily indebted countries supporting poor people, this is a devastating blow. These hedge funds are [now] equipped with an instrument that forces struggling economies into submission.”

“Argentina may not have used the best options or strategies,” said Stanley. But the stance taken by the U.S. Supreme Court shows that “despite the institutional crisis, the lobbying power of the financial sector is intact,” he added.

And if countries begin to doubt the benefits of issuing a bond under New York jurisdiction, the ruling “could also hurt that sector, and the United States…which has gone from being the world’s creditor to one of its biggest debtors,” he argued.

Peter Hakim, president emeritus of the Washington-based Inter-American Dialogue think tank, said “Both the U.S. Treasury and the IMF were also concerned about the broader effect of what would be considered an Argentine default, and also worried about the impact on other debt negotiations.

“Remember the U.S. Treasury [along with the IMF], although it did not join the lawsuit, basically supported Argentina’s contention that it should be able to pay the holdouts the same amount as it was paying creditors who had accepted Argentina’s debt restructuring.
“ U.S. relations with Argentina… have improved in recent months as Argentina has pursued a more orthodox and moderate set of economic policies (including efforts to reform its notoriously manipulated economic statistics, repay its Paris Club obligations, settle the claims of Repsol, etc).”

But the immediate future of those ties depends on how Buenos Aires reacts in this case, for which a solution could be possible if the Argentine goverment demonstrates greater flexibility, Hakim said.

“The Fernández government will have to resist the temptation to turn the decision into a domestic political issue,“ he said.

But that seems difficult to do. For decades the management of the country’s debt has been a central factor in economic and political crises. In her speech Monday, Fernández summed up the history of this issue.

The portion of bonds that Singer and his allies are pressing Argentina to pay is illustrative on its own. In 2008, NML Capital purchased the bonds at a nominal price of 370 million dollars. But at the time they were only worth 48 million dollars.

Thirty percent had been issued during the administration of Carlos Menem (1989-1999), when the peso was pegged to the dollar.

The rest were issued during the “megaswap” – a financial operation cooked up in 2001 to give Argentina breathing space by stretching out the government’s principal and interest payments, which backfired and increased the public debt by tens of billions of dollars.

Former president Fernando de la Rúa (1999-2001) and his economy minister Domingo Cavallo were prosecuted for the megaswap and an international arrest warrant was issued for David Mulford, at the time chairman international of the Credit Suisse First Boston bank and former U.S. Treasury official.