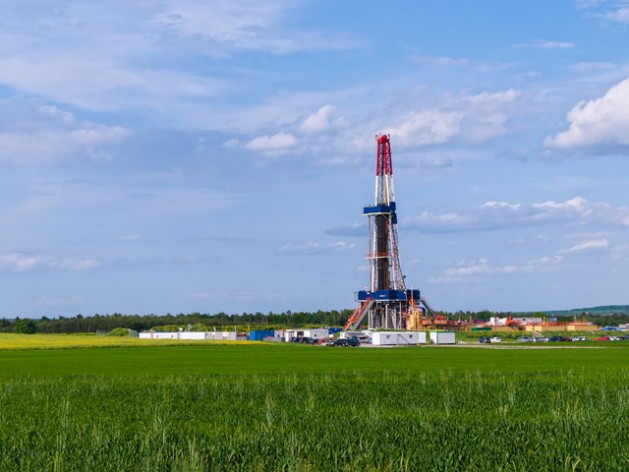 A cocktail of polluting chemicals is used in hydraulic fracturing, the method used to extract shale gas, for example at this fracking well in the U.S. state of Texas, on the border with Mexico. Credit: United States Government

MEXICO CITY, Jun 28 2014 (IPS) - The new legal framework for Mexico’s oil industry has not placed controls on the use of harmful chemicals in the extraction of unconventional fossil fuels, and environmentalists and experts fear their consumption will increase in an industry that is opening up to private capital.

The energy reform “will exacerbate the use of chemicals. The new laws do not address this problem. We need to know what is used, because otherwise we cannot know the consequences. That’s why we want a ban on ‘fracking’ (hydraulic fracturing),” activist Claudia Campero, of Canada’s Blue Planet Project, told IPS.

A package of nine initiatives, including eight new laws and modifications to 12 others on fossil fuels, water, electricity and oil funds, came before the senate in the last week of June, after being debated since Jun. 10 by the Energy Commission.

On Dec. 11, 2013, Congress reformed articles 25, 27 and 28 of the Mexican constitution, opening up exploration, extraction, refining, transport, distribution and sales of hydrocarbons to private, local and foreign investors.

This reform dismantled the foundations of the 1938 nationalisation of the oil industry.

“Many chemicals have not been tested, and new ones are being developed all the time. Companies use trade secrets as an excuse to withhold information." -- Claudia Campero, of Canada’s Blue Planet Project
Analysis of the projects of state oil giant Petróleos Mexicanos (PEMEX), as well as reports from the U.S. Congress and the local oil industry, give an idea of the amount of chemicals used to extract shale gas.

Natural gas trapped in underground shale rock is released by the process of drilling and injecting fluid into the ground at high pressure, which fractures the rocks. The method is known as hydraulic fracturing, or “fracking.”

The gas extraction and recovery process requires large amounts of water and chemical additives, some of which are toxic. Drilling and horizontal fracking generate enormous quantities of waste fluid.

The waste liquid contains dissolved chemicals and other pollutants that need to be treated before they are disposed of, and even afterwards, according to experts and environmental organisations like Greenpeace.

PEMEX’s enviromental impact study for the 2007-2027 Regional Project in Cuenca de Sabinas Piedras Negras, in the northern states of Coahuila and Nuevo León, says that “the liquid wastes generated will be sludges.”

Countries like Brazil and Colombia have already put blocks of natural gas deposits, both conventional and unconventional, out to tender for exploration and extraction, and have created regulations.

The Brazilian National Agency of Petroleum, Natural Gas and Biofuels (ANP) granted 240 blocks of crude and gas in November 2013.

On Apr. 10 the ANP issued resolution 21 stipulating that operators must disclose all chemical products used for processing, transport and storage, including quantities and compositions and their potential impact on human health and the environment.

Operators must also describe chemicals to be used in fracking, and stipulate whether they are inert or may potentially react on contact with groundwater, rocks, plants and human beings, and the control measures being applied.

In Colombia, the National Hydrocarbons Agency is preparing fracking guidelines. This year the agency is offering 25 oil and gas areas, including shale gas.

The waste is classified as dangerous under Mexican regulations and is made up mainly of diesel, barium sulphate and bentonite, a cocktail that is toxic for human health and the environment.

The project would allocate 34,000 hectares out of the total of 4.5 million hectares in the Sabinas Piedras Negras basin for gas exploration and exploitation. Gas extraction would take place on an area of 21,270 hectares, within which 8,035 hectares would be reserved for drilling.

In March, PEMEX presented the environmental impact study for this project to the environment ministry, but withdrew it in May because it would have affected natural protected areas in Puebla. It is expected to reintroduce the project on a more limited geographic scale.

The state-owned company has drilled 18 shale gas wells, five of which are about to complete their exploratory phase, in Coahuila, Nuevo León, Tamaulipas and Veracruz. PEMEX plans to operate a total of 6,500 commercial wells over the next 50 years, but shale gas exploitation may end up in private hands because of the energy reform.

PEMEX has identified five regions with potential shale gas reserves, from Veracruz to Chihuahua, on the border with the United States.

The U.S. Energy Information Administration (EIA) ranks Mexico sixth in the world for technically recoverable shale gas resources, after China, Argentina, Algeria, the United States and Canada, in an analysis of 137 reserves in 41 countries.

PEMEX had no information on how the levels of chemical substances they use compare to Immediately Dangerous to Life or Health (IDLH) concentrations.

According to Greenpeace, the fracking fluids used during the life of one well require 380,000 litres of additives.

The Endocrine Disruption Exchange, a U.S. organisation that compiles and disseminates scientific information about health and environmental problems caused by exposure to chemicals that interfere with hormone actions, identified 944 products containing 632 chemical substances, many of which are potential endocrine disruptors, that are used in hydraulic fracturing.

The U.S. national hydraulic fracturing chemical registry, FracFocus, reports over 72,000 fracking wells in the country and lists 59 chemicals, consistent with those injected by PEMEX in its wells, including methanol, isopropanol, carbonates and acids.

Mexico’s National Hydrocarbons Commission (CNH) has drafted regulations for shale gas operations, but IPS ascertained that these contain no limits on the use of chemicals.

“The problem with the chemicals is the leftover waste, which must be removed from contact with persons and treated to prevent harm to people and the environment. We are going to specify that it must be treated,” Néstor Martínez, a member of the CNH, told IPS.

The CNH draft regulations cover water use and pollution, use of dangerous chemicals and production of earth tremors. They seek to reduce work accidents, prevent pollution by waste fluids and chemicals, and reduce the environmental footprint.

The regulations refer to types of drilling slurries, the quality of well sealing, hydraulic fracking methods and the discharge of fluids and solids.

PEMEX’s contractors will have to present the CNH with a good management plan that includes specifications to be complied with in those areas.

“Many chemicals have not been tested, and new ones are being developed all the time. Companies use trade secrets as an excuse to withhold information,” Blue Planet’s Campero said.

The Environment ministry is due to begin reviewing the regulations for drilling wells and discharging waste in October.