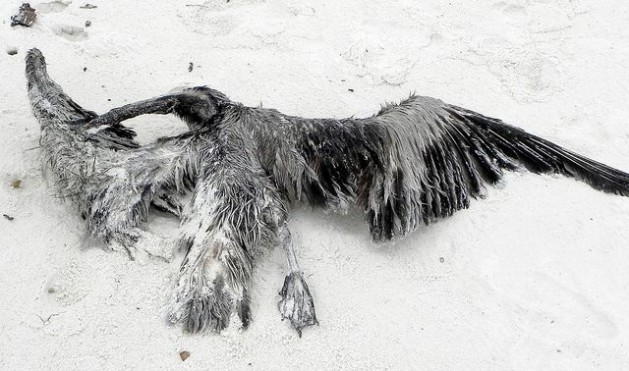 Bird covered with oil in the Gulf of Mexico. Credit: Susan Keith/IPS

MEXICO CITY, Dec 31 2013 (IPS) - The Terra 123 oil and gas well in the southeastern Mexican state of Tabasco was in flames since late October, just 1.5 km from a community of 1,500 Oxiacaque indigenous villagers, who were never evacuated.

The gas leak, which Pemex only managed to get under control on Dec. 21, caused irreversible damage, said Hugo Ireta, an activist with the Santo Tomás Ecological Association, dedicated to working with local populations in Tabasco that have suffered environmental, health and economic impacts of the state-run oil company’s operations.

The reform of articles 25, 27 and 28 of the constitution, approved by Congress in December, paved the way for private national and foreign investment in the oil industry.

The government will now be able to grant private companies permits for prospecting and drilling – a mechanism used in several countries of Latin America, such as Argentina, Ecuador and Peru, where conflicts with local communities are frequent.

“If it has been difficult with Pemex, with the private companies it’s going to be sheer anarchy; the companies are going to be in paradise. Nigeria has serious problems, and the same thing is going to happen to us,” Ireta told IPS, alluding to the armed groups that siphon oil from pipelines to sell on the black market in that West African country.

The Association and local populations affected in Tabasco will file legal charges against Pemex for damage to property in 2014.

An analysis of samples taken in May, August and September for the future lawsuit found lead, cadmium and aluminium in the water at the Chilapa drinking water plant, which operates in the Tabasco municipality of Centla and serves 21 communities.

Residents of the villages of Cunduacán and Huimanguillo brought a collective lawsuit against Pemex in June.

There is oil activity in 13 of the 17 Tabasco municipalities, where daily output amounts to 500,000 barrels per day.

The number of oil spills has been on the rise since 2008. Between 2000 and 2012 more than 26,000 barrels of oil were spilled in Veracruz, and more than 28,000 in Tabasco, according to the government’s National Hydrocarbons Commission.
Hidalgo in the east and Puebla in the southeast, as well as the roads leading to Mexico City, are also vulnerable to damage caused by the oil industry.

“The communities have fought for reparations and Pemex says there has been no damage, even though the impact has been documented,” Ireta said. “The environmental problems generate social problems, and the authorities aren’t responding to society’s demand for a healthy environment.”

Now that Mexico has opened up its oil industry to private foreign capital, there is a risk that these kinds of problems will mushroom, while pressure on water, large amounts of which are needed to extract shale gas, will mount.

“The government does not have the technical or human capacity to stand up to transnational corporations,” said Waldo Carrillo, a veterinarian who raises livestock and hunts white-tail deer on his ranch in Piedras Negras, in the northern state of Coahuila. “The populace has no idea about what shale gas is or the impacts of extracting it.”

In that area lies the Cuenca de Burgos, a gas deposit that also extends to the states of Nuevo León and Tamaulipas, and which includes shale gas.

“What we want is to inform society from another perspective. We want to warn people of the risks,” said Carrillo, one of the founders of the environmental organisation Amigos del Río San Rodrigo, which is fighting to preserve the ecosystem of the San Rodrigo river.

“The government talks about jobs, investment and growth, but it isn’t seeing things from that other side. It basically has an optimistic discourse,” he said.

The state-run Mexican Petroleum Institute acknowledges that the public has a negative image of shale gas, which it attributes to “limited or poorly handled information.”

Since 2011, PEMEX has drilled at least six wells for shale gas in the northern states of Nuevo León and Coahuila. And it is preparing for further exploration in the southeastern state of Veracruz. It also plans to drill 20 wells by 2016, with an investment of over two billion dollars. Foreign oil companies have their eyes on the new wells.

Enormous quantities of water and a broad range of chemicals are required in the hydraulic fracturing or fracking process used to extract shale gas.

In nine of the 28 aquifers in Coahuila extraction exceeds recharge, the National Water Commission reported.

“People need more information,” said Carrillo, whose organisation is preparing an intense awareness-raising campaign on shale gas and fracking for 2014.