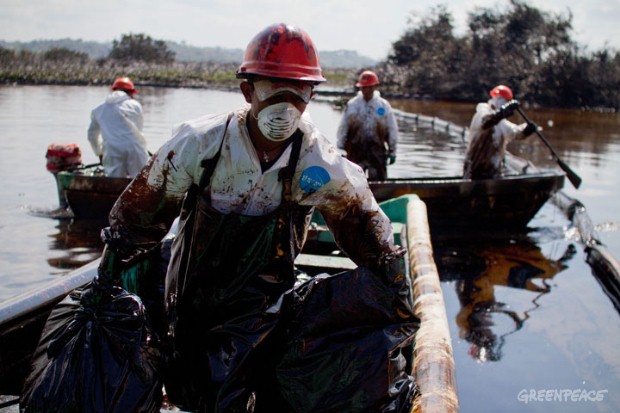 Fishermen from the Mexican town of Coatzacoalcos working to contain an oil spill in their fishing grounds in 2012. Credit: Prometeo Lucero/Greenpeace

MEXICO CITY, Dec 19 2013 (IPS) - As Mexico is about to open its oil industry up to foreign investment, it will need penalties for negligence and regulations that force private firms to follow best practices in order to avoid problems like oil spills, analysts say.

On Dec. 10-11, the Mexican Congress approved the constitutional reform opening up oil exploration, extraction, refining, transportation, distribution and sale of oil and its by-products to local and foreign private investment.

It is a decision that dismantles the very foundations of the 1938 nationalisation of the oil industry.

“This is a good opportunity for the Mexican state to build a robust regulatory framework and above all to develop the capacity to penalise opportunistic or negligent behaviour,” José del Tronco, a professor at the Latin American Faculty of Social Sciences, told IPS.

The expert said that if oil and gas production are stepped up, greater prevention of risks is needed, and companies should incorporate the environmental and human costs of their activities.

Congress passed the reform of articles 25, 27 and 28 of the constitution, making it possible for the government to sign service, production and profit-sharing contracts with private firms.

The reform also allows the government to grant permits or concessions for the exploration and exploitation of oil blocs – a mechanism used in countries like Argentina, Ecuador, Peru and the United States.

The corporations will also be able to store, transport and sell oil products – which effectively breaks down the monopoly of the state-run Pemex oil company.

But Pemex, also a multinational corporation, will be just one more contractor, and will not maintain control over the activity or over the contracts with new operators, which will fall under the authority of the energy ministry.

The regulatory framework, Tronco said, would have to be very different than when it was only necessary to exercise oversight over one company governed by local rules. Multiple operators will participate in a range of activities, and controls and oversight will be hindered without clear rules that take into account international legislation.

In case Pemex commits breach of contract, the companies will be able to turn to international dispute settlement bodies, such as the North American Free Trade Agreement (NAFTA) panel procedures or the World Bank’s International Centre for Settlement of Investment Disputes (ICSID).

The full extent of the reform will be defined by secondary laws that lawmakers will draft in the next few months, and by regulations to be put in place by the government.

The reform was approved in a record 80 hours by the legislatures of 17 of the country’s 31 states – which was needed to enshrine it in the constitution.

Now it has been sent back to Congress for final ratification, before President Enrique Peña Nieto signs it into law.

“International experiences are not encouraging,” Greenpeace Mexico spokesman Raúl Estrada told IPS. “It isn’t clear how the people will benefit from throwing the industry open.

“They say it will draw investment, and that the investment will be spent on the secondary effects of the reform,” such as oil spills and pollution, he said.

The reform has caused political tension. The two left-wing parties in Congress, the Party of the Democratic Revolution and the National Renewal Movement, are opposed to it on the argument that it privatises Pemex and hands over the country’s oil to foreign companies.

Both parties say they will bring legal challenges against the reform and organise a referendum in 2015, based on the federal law on popular consultations passed on Dec. 11.

It was supported by the two traditional forces, the Institutional Revolutionary Party and the opposition National Action Party, along with two smaller parties, Ecological Green and New Alliance.

It also projected a one percent rise in GDP by 2018 and a two percent increase by 2025, while promising that 500,000 new jobs would be created in the next four years and 2.5 million over the next 11 years.

The areas where new regulations would be needed are exploration and exploitation of wells deeper than 1,500 metres and shale gas fields, which Pemex has been working on since 2010 with scant results.

After the April 2010 Deepwater Horizon oil spill in the Gulf of Mexico, the National Hydrocarbons Commission (CNH), implemented new industrial safety provisions for deepwater drilling, to prevent such accidents.

The regulations include the assessment of contingency plans and a requirement of accident insurance. But the reform involves a revision of the provisions, so that they also apply to private companies.

“It’s not clear that the state will be more rigorous with Pemex than it could be with private companies. Is it more likely that they will come down hard on Pemex or on Exxon?” Tronco asked rhetorically.

“Do we have the capacity to administer justice in either one of the spheres, public enterprises or private companies? If we don’t, we have to start to build it,” he said.

The U.S. government does not fully implement the new industrial safety and environmental protection standards created after the 2010 disaster, Estrada said.

“We have many many examples of how the law is broken,” he argued. “How does the reform translate into public policies, budget, transparency, monitoring and oversight over the use of resources and the objectives achieved? That is the important part, to see whether these reforms will work or not.”

Greenpeace has protested the way Pemex operates in communities where the oil industry is active.

And such conflicts will be aggravated when the industry is opened up to private companies, Estrada said.

The reform creates the National Industrial Safety and Environmental Protection Agency, which will set industry standards. There are concerns over whether there will be overlap and duplication of efforts with the CNH, the environment ministry, and the federal environmental protection agency, PROFEPA.