PARIS, Jul 1 2014 (IPS) - Inequality, poor infrastructure and declining trade are some of the problems that Latin America needs to overcome if the region truly wishes to achieve a “golden age”, according to Peru’s President Ollanta Humala.

“We haven’t found the gold yet,” said Humala, a keynote speaker at the 6th International Economic Forum on Latin America and the Caribbean held this week in Paris. “We need to build a more modern and efficient state that offers services to everyone … We cannot overlook poor or vulnerable populations.”

“Erasing inequality is absolutely fundamental because equality itself is a very important human right … At the same time, it’s a key to economic and social development. No country can reach high levels of development with huge levels of inequality” – Danilo Astori, Vice President of Uruguay

The conference, titled ‘Beyond the Golden Decade? Logistics and infrastructure, pillars of regional integration and global trade opportunities’, brought together policy-makers, economists, private-sector representatives and other experts from across Latin America, exploring measures to achieve inclusive growth and structural transformation in the region. Specific Caribbean issues seemed absent from the agenda, however.

The main mantra, repeated by many participants, was that inequality is a huge barrier to Latin America fulfilling its development potential.

“Erasing inequality is absolutely fundamental because equality itself is a very important human right,” the Vice President of Uruguay, Danilo Astori, told IPS. “At the same time, it’s a key to economic and social development. No country can reach high levels of development with huge levels of inequality.”

Income gaps between groups, whether based on ethnicity or gender, are not just “moral issues, they’re also macro issues”, said Julie Katzman, Executive Vice President of the Inter-American Development Bank, a co-organiser of the conference along with the Organisation for Economic Cooperation and Development (OECD) and France’s Ministry for the Economy and Finance.

Katzman said that 70 percent of those excluded from the financial system are women and that there was an 86 billion dollar financing gap for women-owners of small and medium-sized enterprises.

She told IPS that if this gap were closed by 2020, gross domestic product in Latin America would be 12 percent higher by 2030.

“The private sector has a big role to play,” she added. “When you combine financial inclusion and better infrastructure, then you can begin to address the issues being discussed.” 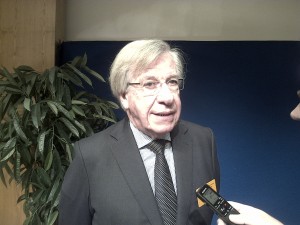 She and other participants emphasised the need for better infrastructure as an “instrument of development”, the main subject of the conference. Roberto Zurli Machado, Director of Infrastructure and Basic Petrochemicals for Banco Nacional de Desenvolvimento Economico e Social (BNDES), said that the region had to modernise to bring its infrastructure to the desired level.

According to the OECD, logistic costs in the region account for between 18 and 35 percent of the value of products, compared with around 8 percent in OECD countries. Meanwhile, the quality of the road system in Latin America is below the level for middle-income countries, the organisation says.

Studies also indicate that improvements in logistics could increase labour productivity in the region by about 35 percent.

“All this affects the competitiveness of exports and the potential for integration,” said Angel Gurría, Secretary-General of the Paris-based OECD. 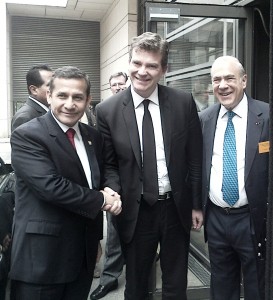 He said that developing an integrated logistics policy and improving the efficiency of customs procedures, through technology, could bring significant benefits in a short time span.

Such measures would also have an impact on inequality, Gurría said. “We need to raise awareness and to strengthen cooperation,” he told IPS, reiterating that “Latin America is not the poorest region but the most unequal.”

The conference, which brings together some 400 experts annually, is one way to address the region’s challenges, Gurría added. This year’s discussions are seen as particularly important because after a decade of relatively strong growth, “Latin America’s economic prospects are becoming more convoluted,” as the OECD puts it.

The region has been affected by the weakness of the euro zone and has experienced “declining trade, moderation of commodity prices and increasing reservation surrounding external monetary and financing conditions,” the organisation says.

It stresses that the rise in the prices of commodity exports “has led Latin American economies to substitute locally manufactured goods with imports, and contributed to a certain decrease in the region’s productive capacities.”

Achieving “improved logistics performance” would help bolster structural change in the region and “represent an opportunity for the insertion of the continent into the global trade,” according to the OECD.

Humala, the president of Peru, said that the region has great potential but faces many challenges, including the impact of climate change [the United Nations climate change conference – COP 20 – is scheduled to be held in Peru in December].

He said that Latin America would truly achieve a “golden age” when it solves its productivity problems and becomes more egalitarian. “The golden era is coming … hard times force us to look at opportunities,” he added.