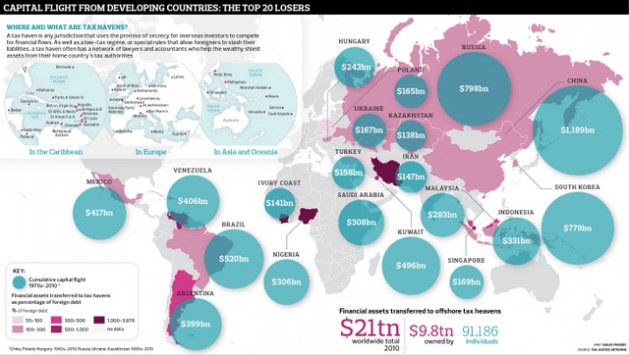 FATCA, as it is better known, was approved in March 2010 and finally came into force on Jul. 1 after a number of delays. It is a reciprocal agreement, which means that other countries may learn which of their citizens have accounts in the United States.

The law requires governments and financial institutions worldwide to report to the Internal Revenue Service (IRS) financial information about U.S. citizens who are resident or have assets abroad.

“The limiting factor for developing countries is that it is bilateral. Mexico, for example, would benefit from receiving information about its residents who have accounts in the United States, but these residents may also have accounts in other jurisdictions,” analyst Andrés Knobel of the London-based Tax Justice Network told IPS.

Knobel and other experts consulted by IPS say that tax evasion and avoidance have reached such proportions that firm national policies and multilateral instruments will be needed to combat them. FATCA could coexist with and support these.

Knobel also complained that, although there is reciprocity between the U.S and its partners, the exchange is unequal.

The U.S.  “demands more information from its partners but gives less. The information is supposed to be for tax purposes, but the authorities decide what they use it for,” he said.

Under FATCA, banks, investments funds and other financial institutions must identify U.S. citizens’ accounts abroad and notify the IRS of their account numbers, balances, names, addresses and U.S. identification numbers.

The law covers investments greater than 50,000 dollars. Institutions that fail to comply risk the withholding of 30 percent of any payments originating in or passing through U.S. territory.

The U.S. has signed bilateral agreements with over 70 countries, in two categories.

The first requires financial institutions to report information about U.S. citizens to their national tax authority, which is to advise the IRS. The second calls for the financial agency to report the information directly to the IRS.

“FATCA has potential for preventing tax evasion, but better mechanisms are needed to process the information quickly and take action as a result,” academic Benito Rivera, of the Faculty of Higher Studies at the National Autonomous University of Mexico, told IPS.

“Agreements have been signed, but fiscal paradises have not been touched, although some transactions have been identified,” he said.

In its report on Tax Administration 2013, the Organisation for Economic Cooperation and Development (OECD) said that in Chile, taxpayers’ fiscal debt had increased continuously between 2005 and 2011.

Average growth during this period was 13 percent. The country has a tax burden of nearly 20 percent of GDP.

Mexico, with a tax burden of 18 percent, had similar growth figures, although data since 2010 are lacking. This is also the case with Brazil, which has a tax burden of 32 percent, and Colombia, with 17 percent.

In Argentina the tax burden has fallen by 48 percent, although the level of tax debt is still high. Its present tax burden is 33 percent.

The OECD estimates that at least 500,000 individuals in Latin America have a combined fortune of seven trillion dollars, with no certainty that they are paying appropriate taxes.

The Economic Commission for Latin American and the Caribbean (ECLAC) puts income tax evasion at nearly 50 percent in Argentina, 47 percent in Chile, 64 percent in Ecuador and 42 percent in Mexico.

The International Monetary Fund (IMF) has also warned of tax avoidance and evasion by means of “financial engineering.”

In the document “Spillovers in International Corporate Taxation,” published in May, the IMF indicates that foreign direct investment (FDI) that leaves Brazil turns up in known fiscal paradises like the Cayman Islands, the British Virgin Islands, the Bahamas, the Netherlands and Luxemburg.

In another example, it says that FDI arriving in El Salvador comes from countries like Panama and the Cayman Islands.

“With FATCA, more information will be available, but there will be loopholes for rich companies and individuals to avoid the exchange of their information,” Knobel said.

He recalled that “for a long time, organisations have been asking for automatic information exchange. We asked for public registers of final beneficiaries, the real owners of any financial activity that takes place.”

The U.S.-Mexico FATCA agreement, signed in November 2012, shows the disparity in the information provided. Mexico is required to report the total amount of interest, dividends and other income generated and paid by the account assets, as well as total income from sales of possessions that are recorded in the account.

But the U.S. will only inform Mexico of the total amount of interest paid on a deposit account, dividends or any other source of income.

In the case of Chile, the national tax authority must ask U.S. account holders for their tax identification number and written consent. It must report annually to the IRS the number and balance of non-consenting accounts.

Under the agreement, the U.S. “shall cooperate with Chile to respond to requests to collect and exchange information on accounts held in U.S. financial institutions by residents of Chile.”

There are at least 60 tax havens in the world, including U.S. territories like the northeastern state of Delaware, which has big tax discounts. For this reason, Washington has negotiated favourable bilateral agreements.

The Tax Justice Network’s 2013 Financial Secrecy Index ranks the U.S. in sixth position, behind Switzerland, Luxemburg and Hong Kong, among others. In Latin America, only Panama is placed among the top 20.

In February, the U.S. Senate’s Committee on Homeland Security and Government Affairs criticised the FATCA in its report “Offshore Tax Evasion: The Effort to Collect Unpaid Taxes on Billions in Hidden Offshore Accounts.”

The report criticised the thresholds for reporting accounts, the failure to aggregate data from different institutions and potential tax evasion through offshore shell companies.

The law will not solve the problem of reporting information; its regulations have created a number of loopholes, the report says.

“It will take a few years for it to meet its goals. It would be desirable for the competent authorities to meet regularly to analyse procedures and speed of action,” Rivera said.