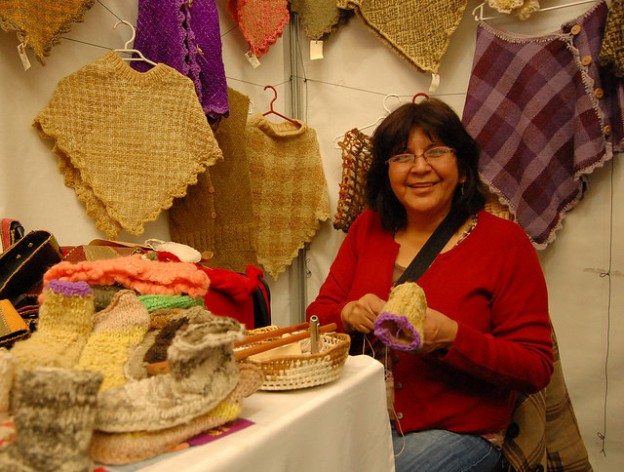 A stand at the crafts fair in the city of Coyhaique. The production of locally-made ecological crafts from Patagonia is part of the development alternative promoted by the Aysén Life Reserve project. Credit: Marianela Jarraud/IPS

COYHAIQUE, Chile, Aug 19 2014 (IPS) - The people of Patagonia in southern Chile are working to make the Aysén region a “life reserve”. Neighbouring Argentina, across the border, is a historic ally in this remote wilderness area which is struggling to achieve sustainable development and boost growth by making use of its natural assets.

“The Aysén Life Reserve mega citizen initiative emerged as a theoretical proposal to have a special region with a special development model, one based on inclusive sustainable development, with and for the people of the region,” activist Peter Hartmann, the creator of the concept and of the coalition that is pushing the project forward, told IPS.

“Many people say we want to chain off the region, but our aim is to use its good qualities, versus the megaprojects of the globalised world, which want to destroy them,” he said.

The southern region of Aysén is one of the least populated – and least densely populated – areas in Chile, with 105,000 inhabitants. This chilly wilderness area of vast biodiversity, swift-flowing rivers, lakes and glaciers also offers fertile land and marine resources that are exploited by large fishing companies.

“The model we are building is aimed at strengthening economic development on a local scale, in a democratic fashion, and not with models imposed on us – development that is cooperative and economically and environmentally sustainable in time, under the premise that we are all just passing through this life and that you have to give back what you take.” -- Claudia Torres

“We are tiny and insignificant in this enormous territory,” Claudia Torres, a designer and communicator who was born and raised in Aysén, told IPS with visible pride.

Patagonia covers a total extension of approximately 800,000 sq km at the southern tip of the Americas, 75 percent of which is in Argentina and the rest in Aysén and the southernmost Chilean region of Magallanes.

Patagonia is made up of diverse ecosystems and is home to numerous species of flora and fauna, including birds, reptiles and amphibians that have not yet been identified. It is also the last refuge of the highly endangered huemul or south Andean deer.

Although it is in the middle of a stunning wilderness area, Coyhaique, the capital of Aysén, 1,629 km south of Santiago, is paradoxically the most polluted city in Chile, because in this region where temperatures are often below zero, local inhabitants heat their homes and cook with firewood, much of which is wet, green or mossy, because it is cheaper than dry wood.

It is one of the poorest and most vulnerable regions of the country, where 9.9 percent of the population lives in poverty and 4.2 percent in extreme poverty.

But these figures fail to reflect the poverty conditions suffered by families in the region, the regional government’s secretary of social development, Eduardo Montti, told IPS.

“We are lagging in terms of being able to ensure basic living standards and essential services for the community and to make it possible for the different actors to develop in equal conditions as the rest of the country,” he said.

But, he added, in May the government of socialist President Michelle Bachelet established a plan for remote or impoverished areas which recognises the disparities with respect to the rest of the country, thus helping to more clearly identify the most urgent needs.

He said that in this region it is important “to move ahead in tourism enterprises, strengthen small local economies, share and participate in the development of our local customs, and help make them known to the world.” “Many people say we want to chain off the region, but our aim is to use its good qualities, versus the megaprojects of the globalised world, which want to destroy them,” says Peter Hartmann, creator of the Aysén Life Reserve initiative in southern Chile. Credit: Marianela Jarroud/IPS

Torres, an active participant in the Citizen Coalition for the Aysén Life Reserve, said the region is “one of the few that still have the chance to come up with a different kind of development.”

This is one of the few areas in the world that has largely kept its original wilderness intact. Much of the territory is under different forms of protection, including the Laguna San Rafael National Park, a UNESCO World Biosphere Reserve that contains a coastal lagoon and glaciers. The region as a whole is also seeking world heritage site status.

“The model we are building is aimed at strengthening economic development on a local scale, in a democratic fashion, and not with models imposed on us – development that is cooperative and economically and environmentally sustainable in time, under the premise that we are all just passing through this life and that you have to give back what you take,” Torres said.

She added that the project “is a dream and we are working to achieve it. Because people here understand that life itself is part of what makes it special to live here. For example, in this region you can still drink water from a river or a lake, because you know you won’t have problems.”

In her view, cities become dependent on, and vulnerable to, supplies from outside, and “the more independent you are, the better chances you have of surviving.”

“We don’t see this as a life reserve exclusive to Patagonians, but for the whole country. For example, I don’t have problems with the region sharing water with areas that suffer from drought.” But water for crops, drinking, or living – not for big industry, she clarified.

Chile’s Patagonians have a powerful ally in this endeavour: the Argentine side of Patagonia is fighting against the use of watersheds shared with Chile, by mining corporations.

“There is a common element in this big fight: water,” Torres said.

The two sides of the Andes share a long history of close ties and traditions which makes Patagonia one single territory, of great value because of its biodiversity – but highly vulnerable as well.

From the start, the Aysén Life Reserve has shown that it is more than just an idea on paper. Hartmann pointed out that three community-based sustainable tourism enterprises have been established, financed by the Fondo de las Américas (FONDAM).

“We trained the communities in how to take care of their own territory, and in community-based tourism. That gave rise to a successful school for tourism guides,” he said proudly.

“Artisanal fishers from Puerto Aysén have also been making an effort to make their work more sustainable; there are exemplary garbage collection projects, and many crafts are being produced using local products, which is super sustainable,” he added.

Then there is “Sabores de Aysén” (Tastes of Aysén), a stamp that certifies quality products and services reflecting the region’s identity and care for nature. There is also a solar energy cooperative with a steadily growing number of members.

The Life Reserve project, Hartmann said, has two dimensions: awareness-raising and citizen participation. An Aysén Reserva de Vida label was created for sustainable products or processes, to make them more attractive to local consumers and visitors.

The idea of making the region a “Life Reserve” is cross-cutting and has managed to win the involvement of varied segments of society – a positive thing in a region that was highly polarised after 10 years of struggle against the HidroAysén hydroelectric project, which would have built large dams on wilderness rivers but was finally cancelled by the government in June.

The local population was also divided by the mass protests over the region’s isolation and high local prices of fuel and food that broke out in 2012, under the government of rightwing President Sebastián Piñera (2010-2014).

“There is greater awareness, and that is a step forward,” Torres said. “That means there is growing appreciation for what this region has to offer.”