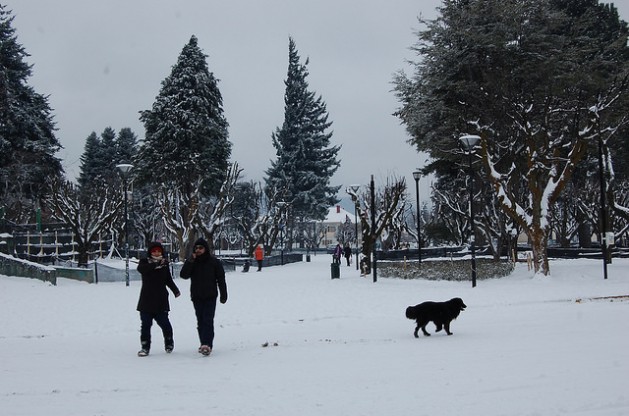 The beauty of the snowy streets of Coyhaique, the capital of the Patagonia region of Aysén, hide the fact that it is Chile’s most polluted city, mainly due to the use of wet firewood to heat homes, in an area where temperatures are below zero for much of the year. Credit: Marianela Jarroud/IPS

COYHAIQUE, Chile , Aug 12 2014 (IPS) - The southern region of Aysén in Chile’s Patagonian wilderness has the highest energy costs in the entire country. And the regional capital, Coyhaique, is the most polluted city in the nation, even though it has huge potential for hydroelectricity and wind power.

Most of the population opposed the construction of the HidroAysén hydropower dams, and the public pressure helped bring about the Jun. 10 cancellation of the project by the administration of socialist President Michelle Bachelet.

Now that the battle has been won, the region is looking for a way to reach energy autonomy.

“Aysén is Chile’s hydropower mecca. Nevertheless there is a monopoly over electricity here that continues to use diesel for 28 percent of power generation,” activist Peter Hartmann, a member of the Patagonia Defence Council and creator of the concept Aysén Reserve of Life, told IPS.

And fuel, Hartmann said, costs twice as much in Aysén as in the centre of Chile, which means the price of electricity is nearly double what it costs in Santiago.

The region of Aysén, whose capital is 1,629 km south of Santiago, is the heart of Chile’s Patagonia wilderness region. It consists of 108,494 sq km of glaciers, evergreen forests, fjords, islands, canals, lakes and swift-running rivers.

“Above and beyond structural questions that have to be worked out, this region only has good things to offer,” social activist Miriam Chible told IPS.

Mega does not mean good

The now-defunct HidroAysén project aimed to build five mega hydropower dams on the Baker and Pascua rivers, which would have generated 2,750 MW of electricity, with an annual capacity of 18,430 gigawatt-hours.

Environmentalists led the fight against the construction of the dams because of the impact they could have had on Chile’s Patagonia region, which has been proposed for humanity’s heritage status with UNESCO (the U.N. Educational, Scientific and Cultural Organisation) due to its vast biodiversity and enormous reserves of freshwater, among the planet’s largest.

But the Cuervo River project, which the Patagonia Defence Council sees as having a lesser impact, continues moving forward. The government has not yet taken a stance on it.

“Aysén has natural resources and enterprising people,” she said. “It has clearly marked seasons, which although it is a challenge makes it possible for us to plan. Besides, it’s next to Argentina, which gives it tremendous potential because it makes us part of a binational Patagonian area.”

Coyhaique, the region’s administrative and economic capital, is surrounded by snow-capped mountains. But paradoxically this is also Chile’s most polluted city.

The reason is that its 56,000 inhabitants mainly use firewood – much of which is green, wet or covered with moss – to heat their homes and cook in this extreme southern region, where temperatures are below zero for much of the year.

“In Aysén everyone heats and cooks with firewood, which causes Coyhaique’s high levels of pollution,” Hartmann said.

He added, however, that “If it occurred to you to put a small electric heater in your house in the wintertime, they would fine you for overconsumption. These are the things that no one understands.”

To this is added the poor insulation of homes in this region, where 9.9 percent of the population is poor – below the national average of 11.7 percent – but 4.2 percent is extremely poor – higher than the Chilean average of 3.7 percent.

Hartmann explained that half of the houses in this city have no insulation. He was referring to homes subsidised by the state, which he described as “anti-social” housing. 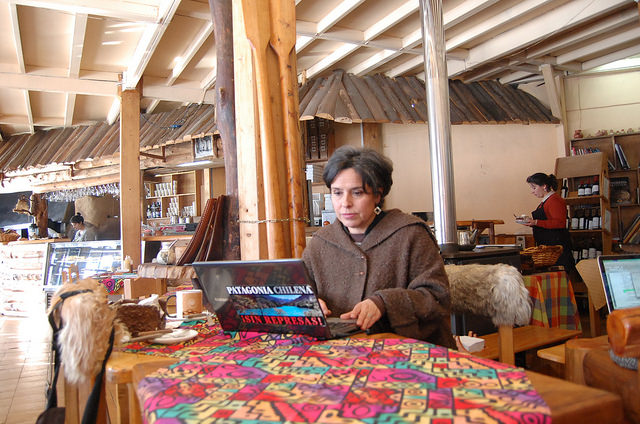 This Southern Cone country of 17.6 million people has 18,278 MW of gross installed capacity. It imports 97 percent of the fossil fuels it needs, and hydropower makes up 40 percent of the energy mix, which is dependent on highly polluting fossil fuels that drive thermal power stations, for the rest.

This country’s shortage of energy sources has made the cost of electricity per megawatt/hour (MWh) in Chile one of the highest in Latin America: over 160 dollars, compared to 55 dollars in Peru, 40 in Colombia and 10 in Argentina.

And in Aysén the cost per MWh is double the national average.

Currently, Edelaysen, a subsidiary of the private company Saesa, controls the generation, transmission and distribution of electric power in the region.

Those who fought the HidroAysén project are now pressing for an even more ambitious goal: regional energy sovereignty.

One of the leaders of this struggle is Miriam Chible.

This widow and mother of four who was born and raised in Coyhaique forms part of the Presidential Advisory Commission for Regional Development and Decentralisation, established in April to work towards energy sovereignty by focusing on unconventional renewable sources. Another goal of the commission is autonomy in the area of food supplies.

“We are trying to design a different model of economic development for Aysén,” Chible said.

The idea, she added, “is for Aysén to come up with its own energy project, in order to later push for its own kind of development.”

The activist said the environmental movement believes Aysén’s hydropower potential could be harnessed by means of mini-dams, which have a smaller impact, while developing wind, solar and geothermal energy as well.

Some progress in that direction has been made. Six months ago, 120 people created a Solar Cooperative, which on Aug. 2 held its first seminar on local experiences in unconventional renewable energy sources.

Chible has 24 solar panels on her restaurant Histórico Ricer, which has been serving meals in the centre of Coyhaique for 33 years. Like her, there are dozens of families making an effort to diversify their energy sources.

The next step will be the purchase of LED light bulbs in bulk, for each member of the cooperative to install in their homes. “We also have metres that show how much energy we consume every day, and we hold energy ecoliteracy workshops,” she said.

The Aysén regional secretary of energy, Juan Antonio Bijit, explained to IPS that the region has the capacity to generate a significant amount of energy, with hydropower and wind potential. We even, he said, “have incorporated photovoltaic solutions with very good results.”

He said the Energy Agenda launched by President Bachelet on Jun. 15 is looking at boosting the electricity supply in the region in order to bring down rates “and improve people’s standard of living.”

Bijit said that for now there are no plans to subsidise the cost of energy in Aysén. But he added that community input will be included in all future decisions.

“We cannot do things between four walls; it’s important to talk to the people before decisions are reached,” he said.

“The idea is for people to be participants in what needs to be done in the area of energy, and in Aysén the population has a high level of awareness about this issue,” he said.