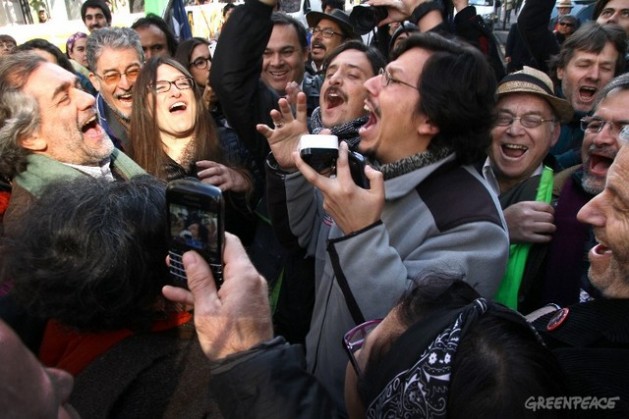 Patagonia Without Dams activists broke out in cheers when they heard the decision reached by a ministerial committee to reject the HidroAysén dam project on Tuesday Jun. 10. Credit: Courtesy of Greenpeace Chile

SANTIAGO , Jun 11 2014 (IPS) - The Chilean government rejected Tuesday the controversial HidroAysén project for the construction of five hydroelectric dams on rivers in the south of the country. The decision came after years of struggle by environmental groups and local communities, who warned the world of the destruction the dams would wreak on the Patagonian wilderness.

“This is a historic day,” Juan Pablo Orrego, the international coordinator of the Patagonia Without Dams campaign, told IPS after the decision was announced.

“I am moved that the citizens – because this was a victory by the citizens – managed to finally inspire a government to do the right thing in the face of a mega-project,” he added.

The decision was reached after a three-hour meeting by a committee of ministers of the government of socialist President Michelle Bachelet, who took office for a second term in March.

The committee, made up of the ministers of environment, energy, agriculture, mining, economy and health, unanimously accepted the 35 complaints presented against the project, 34 of which were introduced by communities and others opposed to the initiative and the last of which was presented by the company itself.

The decision took six years to arrive, after a number of legal battles. And in response to the announcement people took to the streets in Patagonia, a wilderness region in southern Chile, to celebrate.

“This ministerial committee has decided to accept the complaints presented by the community, by the citizens, and annul the environmental permit for the HidroAysén project,” Environment Minister Pablo Badenier told reporters, declaring that the dam had been rejected by the government.

The company, owned by Italian firm Endesa-Enel (which holds a 51 percent share) and Chile’s Colbún, has 30 days to appeal the resolution in an environmental court in Valdivia, in southern Chile.

During the election campaign, President Bachelet had stated that the dams were not viable.

In May, when her administration unveiled its energy agenda, she said she would promote renewable unconventional energy sources and the use of natural gas, in contrast with the plan of her predecessor, Sebastián Piñera (2010-2014), which favoured hydropower.

The HidroAysén project, presented in August 2007, was to involve the construction of five large hydroelectric dams on the Baker and Pascua rivers in Patagonia. But the following year, 32 of the 34 public agencies called on to pronounce themselves did so against the project.

Environmental groups, with the support of some government officials, have proposed UNESCO world heritage site status for the southern region of Aysén, where the dams were to be built some 1,600 km south of Santiago. Patagonia is not only biodiverse but is also one of the biggest reserves of freshwater in the world.

The dams would have flooded a total of 5,910 hectares of wilderness, for a total capacity of 2,750 MW for the national grid (SIC).

Chile has a total installed capacity of 17,000 MW: 74 percent in SIC, 25 percent in the great northern grid (SING), and the rest in medium-sized grids in the southern regions of Aysén and Magallanes.

The project also included a 1,912-km power line, the longest in the world, which was to run through nine of the 15 regions of this long narrow South American country.

Energy Minister Máximo Pacheco said the HidroAysén project “suffers from serious problems in its execution because it did not treat aspects related to the people who live there with due care and attention.”

He added that as energy minister “I have voted with complete peace and clarity of mind with respect to this project.”

Pacheco also said “the decision that was reached today does not compromise in the least the energy policy that we have designed in the energy agenda, but specifically refers to one project.”

Orrego, the environmentalist, said the decision against the construction of the HidroAysén dams “points to the end of the era of the thermoelectric and hydroelectric energy mega-projects – an era that in the developed countries ended a long time ago.”

Chile imports 97 percent of its fossil fuels and its energy mix is made up of 40 percent hydropower and the rest of polluting fossil fuels, used in thermoelectric plants.

The fact that Chile lacks domestic oil and natural gas means the cost of producing electricity per MW-hour is among the highest in Latin America – over 160 dollars, compared to 55 dollars in Peru, 40 in Colombia and 10 in Argentina.

The executive director of the association of electric companies (ASEL), Rodrigo Castillo, said on Tuesday that the resolution “refers to one project in particular and does not make it impossible to use hydrological resources in southern Chile in the future.”

But René Muga, the head of the association of power plants (AGG), said HidroAysén represented 40 percent of the energy needed by the country in the next 10 years, equivalent, according to his figures, to what seven or eight coal-fired plants would produce. “That energy is really necessary,” he argued.

“It is a brave move,” the environmentalist said. “But it was inspired by the citizens, of that we have no doubt.”

“These many years of struggle have culminated in this resounding victory for the citizens,” Orrego added.

The Patagonia Without Dams campaign waged by a coalition of environmental and citizen groups and led by Orrego and prominent environmentalist Sara Larraín managed to mobilise the entire country against the HidroAysén project and drew international attention to the planned wilderness dams.

In opinion polls, three-quarters of respondents have said they were opposed to the dams. And in early 2011, more than 100,000 people took to the streets against HidroAysén.

Orrego, who won the Right Livelihood Award in 1998, expressed his gratitude to Chile, “because this campaign was carried out by the entire country.”

He also acknowledged the participation of “allies” in other countries, such as Argentina, Belgium, Italy and Spain.

In the Aysén región, critics of the project waited in a local cinema for the announcement of the ministerial committee’s decision, before marching through the streets of Coyhaique, the regional capital, to celebrate.

Patricio Segura of the Citizen Coalition for the Aysen Life Reserve told IPS that the government’s decision “was the right thing in terms of sustainability and the construction of the energy mix that we as a country deserve.”

“We hoped President Michelle Bachelet’s political commitment would be fulfilled, as well as the duty to set aside an irregular project that advanced due to lobbying and pressure,” he added.

Segura said the project “generated tremendous polarisation in the Aysén region,” and he complained that “they managed to divide the people of Aysén without even laying one brick.”

As a result, he said, this decision lays the foundation “for us to sit down in Aysén and discuss what really matters, which is the Aysén Life Reserve.”

“Now we have to discuss a sovereign and sustainable energy mix for the Aysén region, including our region’s abundant water resources and wind energy,” he added.