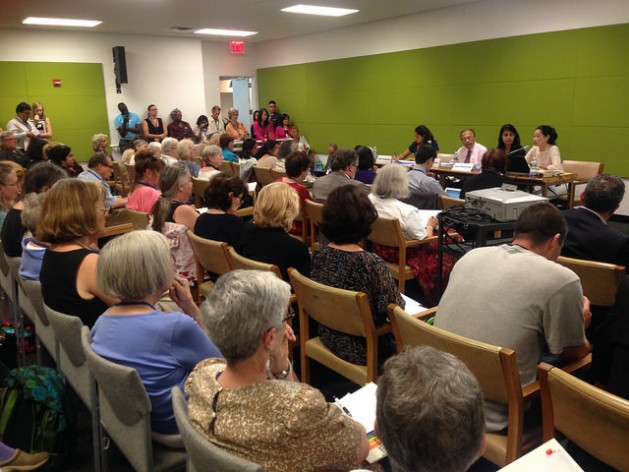 “We are part of a bigger humanity.” -- Ambassador Anwarul Chowdhury

Education “is linked to all areas of sustainable development and is vital in achieving all Sustainable Development Goals and targets,” Hiro Sakurai, SGI’s U.N. liaison office director, told IPS.

“Education for global citizenship deserves particular attention and emphasis in this regard as it helps link issues and disciplines, brings together all stakeholders, and fosters shared vision and objectives,” he said.

Ambassador Anwarul Chowdhury, former under-secretary general and high representative of the U.N., gave the event’s keynote address. He expressed his excitement at the increased prominence of global citizenship in development circles.

According to Ambassador Chowdhury, global citizenship requires “self-transformation” and can be a “pathway to a culture of peace.”

Progress requires a “determination to treat each one of us as a global citizen,” he said. “We are part of a bigger humanity.”

Saphira Ramesfar of the Baha’i International Community also spoke to the transformative nature of global citizenship.

“It is not enough for education to provide individuals who can read, write and count,” she said. “Education must be transformative and bring shared values to life, cultivating an active care for the world itself and for those with whom we share it. Education needs to fully assume its role in building just, unified and inclusive societies.”

In the past, attempts to build global citizenship have focused on the young, but Ambassador Chowdhury argued for a more expansive understanding of the concept.

Anjali Rangaswami of the U.N. Department of Economic and Social Affairs explained how NGOs have actively participated in the crafting of the proposed Sustainable Development Goals (SDGs). Past years have set “a very high standard for civil society engagement,” according to Rangaswami.

The Millennium Development Goals (MDGs), set to expire in 2015, included a target of universal primary education. The SDGs, if adopted in their current draft form, would aim for universal secondary education as well.

Under target four, the SDGs specifically mention education for global citizenship, an issue left unaddressed by the MDGs.

The U.N’s Global Education First Initiative (GEFI), which lists “fostering global citizenship” as one of its three main priorities, was influential in this new development.

According to Min Jeong Kim, head of GEFI’s secretariat team, the initiative was launched by the secretary-general in 2012 because “at that point education had sort of stagnated after rapid growth following adoption of [the] MDGs.”

After the panel speakers concluded, participants in the workshop broke into small groups to share their own perspectives on education for global citizenship.

The event was also co-sponsored by the Baha’i International Community, Global Movement for a Culture of Peace, Human Rights Education Associates, Sustainable Development Education Caucus and Values Caucus, bringing a wide variety of expertise to the table.

The SDGs are an opportunity for a whole new outlook on education.

Education should be focused on developing meaningful lives, rather than focused on making a living, Ambassador Chowdhury told IPS.